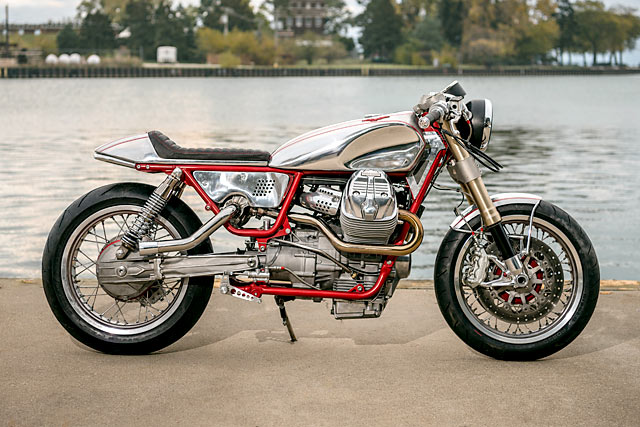 We’ve always been of the opinion that if an Aussie puts their mind to something, one way or another it will happen. And Victorian boy Craig Rodsmith is living, breathing, punk rocking proof that this is true. After relocating to the very un-Australian climes of North Chicago, Craig has garnered more than a little attention in American motorcycling circles. After the suitably gigantic splash that his now famous Moto Guzzi Dustbin Racer made at the 2017 Handbuilt show, his main thought was, “If only they could see the engine.” Problem solved. The words ‘master builder’ get bandied around a lot. But when they’re used in reference to Craig and his bikes, you tend to think that they’re more than justified. “I’ve been building bikes for almost forty years,” says Craig, with the typical Australian lack of pretence. “I’m originally from Melbourne, Australia, but I’ve had a shop in Illinois for over twenty years now.” As a kid he customised anything he could get his hands on, starting with his ’57 BSA when he was 12 years old. And yes, you did read that right. A one-man-show and proud, Craig isn’t the sort of builder to pull a team of specialists together to help him out. “I try to take care of every aspect of the builds myself, using mostly traditional methods and tools. Raw and polished metal is kinda my style,” he notes. A quick thumb through his back catalogue reveals extensive hands-on experience in bodywork, paint, fabrication, mechanical and electrical work across both bikes and cars.

[superquote]“I try to take care of every aspect of the builds myself, using mostly traditional methods and tools.”[/superquote] The bike build was commissioned by Moto Guzzi as part of their V9 Pro Build series, along with scene bigwigs Untitled Motorcycles, Revival Cycles and Moto Studio. “I decided I wanted to build a somewhat traditional style of cafe racer, yet still retain modern amenities such as ABS, traction control, fuel injection and the like.” Based on a 2017 Moto Guzzi V9 Roamer, Craig calls it a ‘V9 Sport’, as it was inspired by the early 70s V7 Guzzi Sport, celebrated by fans as the brand’s very first cafe racer.

Because the bike was a brand spanker when it was rolled into Rodsmith’s shop, the back story here is about as interesting as a high school science teacher’s love life. But things get better from here on in. “I started by stripping the whole bike down and removing all the factory black powder coating to reveal the almost flawless castings.” then the Aussie hand-made the tank, seat and those snail secreting side covers. A biblical amount of polishing then followed, while the standard V9 frame was de-tabbed and powder coated in an ’anodised’ red.

“It’s a Garret T15 turbo,” says Craig, nonchalantly. Quizzing the man for more specifics provides only a little extra gold. “I wanted to wake the racer’s engine up a little. I also made the stainless steel exhaust and the aluminum intake plenum.” Classic ‘speaking softly and carrying a big turbo stick’, we’d say. He goes on to say that, despite what you’d think about the complexities of plumbing a custom turbo setup, the hardest part of the build was hiding the bike’s electronics and wiring to keep it looking clean and lean. “I would say my favorite part, even though it’s quite small, is the headlight brackets I formed to ‘flow’ over the top of the triple trees. The finished bike was debuted by Moto Guzzi at the Chicago International Motor Show this past weekend to an understandably welcome response. “It was great to get people’s feedback on the Friday before I headed out to the One show in Portland,” notes Craig. Here Craig was asked by Italy’s Rizoma to be part of their new ’Behind the Build” series, which was moderated by Miguel Galluzzi, who just so happened to have designed the new V9 itself, along with the Ducati Monster, Aprilia RSV4 and many other iconic modern bikes. As you’d expect, Craig has left no part of the bike untouched. Trimming down an encyclopaedic list of goodies to something more digestible, Craig notes the new 50mm Marzocchi inverted front forks, Supershox rear springs, aluminum Excel rims with stainless spokes and Rodsmith-modified Moto Guzzi hubs and Pirelli Diablo Corsa tyres with a 120/70-17 fronts and a 160/60-17 rear.

The sugar on top of an already ridiculously good build came in the form of Aluminum and leather grips from Speed of Cheese Racing, some rearsets from Slipstream Cycle Works and a beautifully upholstered leather seat stitched by JB Seatz. And then he paused for a smoke. Yes, Craig’s Dustbin Racer Guzzi was amazing. We’d take it home and let it sleep on the bed beside us in an instant. But as for the bike we’d ride every day, rain, hail or metallic shine? It’d be the Rodsmith Sport for us every single time.