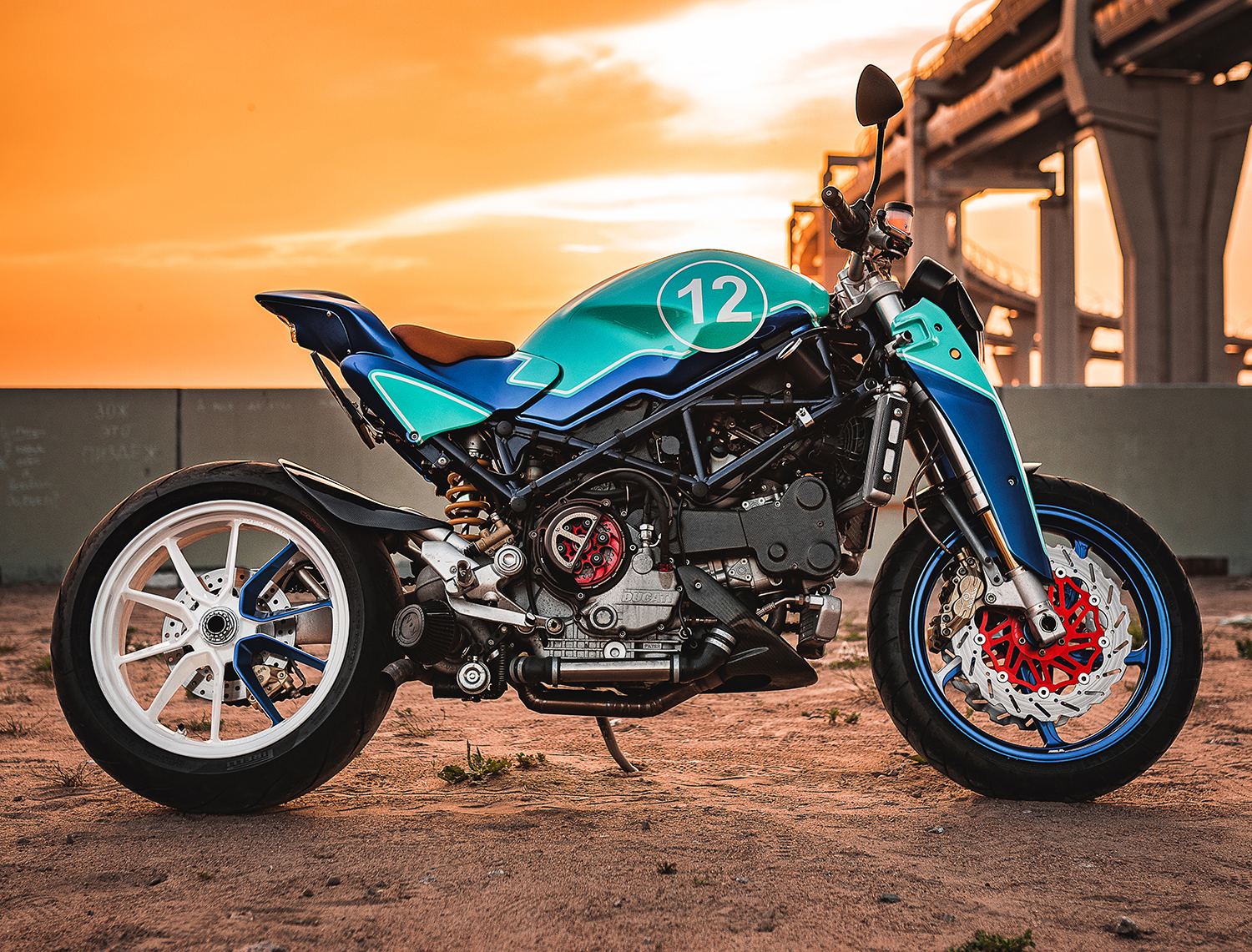 The Ducati Monster can arguably lay claim to saving the famous Italian brand, and what started out as a parts bin special under then owners Cagiva, has produced record sales and a cult following. From F1 drivers, stars of stage and screen, and the loyal Ducatisti; having a Monster in the garage is sure to make you smile. But even owning the model’s ultimate factory example was never going to be enough for motorcycle mad scientist Vitaliy Selyukov, who races a three-wheeled example on the ice. So you just know the proprietor of St Petersberg’s Balamutti workshop was going to have a serious streetbike! From Russia with love this is his boosted Ducati S4R with all the fruit and a punch of radioactive power, he calls it Strontium.

When he’s not in Siberia with his three-wheeled supercharged Ducati charging down the ice on a top speed run, Vitaliy is in his workshop planning out other ways to go fast. When it comes to building fast Italian bikes in the west of the country he’s the man and he has a reputation to uphold on the street. “To develop Strontium, I did not need a nuclear reactor and explosion; I created it in an entirely peaceful and harmless way. At my disposal were my workshop and dream of making a turbocharged motorcycle,” he smiles. And you start to wonder if he wears the white coat of a scientist with an evil plan instead of mechanics overalls.

The 130hp of thunderous Ducati L-Twin fitted to the S4R is more than enough for most, but for Vitaliy not even a small step up in power would be enough. Being a four-valve, water-cooled engine and already featuring an oil cooler too, it makes for one of the better candidates from the Bologna factory for forced induction. But that doesn’t mean it was easy and to get the power levels he was after meant the bulk of the build time of nearly a year was dedicated to designing the powerplants layout and fine tuning the end result.

The party starts with no small puffer, a Garrett GT35 turbo is a serious piece of kit on a car, let alone a motorcycle. But not having to overspin the large turbine housing and keeping the compressor in the efficient part of its flow map is actually a clever first step in keeping the combustion controllable. However some internal changes were still required, our man in Russia not wanting to give away details but confirming a piston change. But, “a gear-driven oil pump was already installed, which drove me to despair.” So after much trial and error, it was found an electric pump solved the lubrication problems.

With all the calculations done a new intake manifold with the appropriate internal capacity was fabricated. Then it was over to the hot side of the engine to make the complex exhaust manifold that routes the L-Twins exhaust gases to the turbo that is very neatly hidden under the engine. A pod filter sits on the front, while the internally wastegated turbo screams out the shortest of dump pipes. To hold the power the dry clutch was upgraded with an extra friction plate and new springs provide increased clamping pressure. Then rather than fit a fuel controller, Vitaliy spent hours tuning the Magnetti Marelli ECU, before the final flash was uploaded.

Now that he had all that power at just the twist of the throttle away he needed the Monster to look just as good. And one man has made it his mission to make the naked Ducati even more beautiful, Italian automotive designer Paolo Tesio (aka Tex Design). With one of his kits shipped in, Vitaliy set about customising it to his liking and also making the appropriate changes to fit the turbo setup. The fork guards in particular give the bike a far more muscular presence and with the shortened tail there is a big bull like muscularity in the design.

A tiny carbon blade front fender was added, while the belly pan and slick rear hugger is also made from lightweight carbon fibre. Then the body was stripped down and sent off for paint, where Anton of Octopus Art Aerografia got to work, spraying the second bike to feature his talents on Pipeburn just this week. The bold colour palette is a far cry from the almost always red Ducati and with the paint gun even running over the stunning lightweight wheels, this is not a bike you’ll ever miss in a hurry! The finishing touch to the look is the simple tan leather seat that adds a touch of class to the wild creation.

The high-quality factory Showa suspension is fully adjustable and more than up to the job, but the decision was made to go with bigger wave pattern front brakes that required an adjustment to the calipers. To maximise their performance a new more powerful master cylinder was fitted up on the bars, with the same done on the other side for the now improved clutch package. To finish out the cockpit a small boost gauge has been fitted to the trellis frame, but it would take a very brave man to peak at the PSI number at wide open throttle! And Vitaliy is just such a man and is rightfully proud of his creation, “The Strontium is the only turbocharged Monster in the city; it attracts attention, of course!”