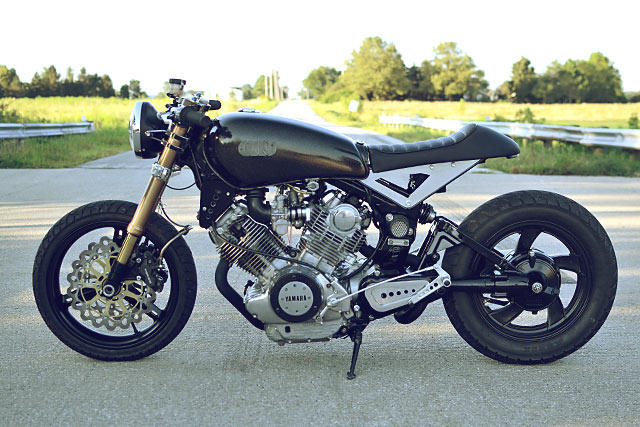 For a film about jet aircraft, 1986’s Top Gun sure got a lot of new riders onto bikes. Cruise’s Kawasaki Ninja 900 seemed to be the perfect match for his ‘Maverick’ character: fast, slick and more than a little bit rebellious. So when Ohio’s Jason Reihing from Charlie James Customs wanted to build a Yamaha XV750 with these very same attributes, it became clear that his own two-wheeled need for speed could only be called one thing. After a couple years of pining over custom Viragos online, Jason knew he had to build one. “I found this bike in the summer of 2015, along with a bunch of spares, up in Detroit. The owner was very eccentric to say the least, but I left with the Virago as well as slue of other parts. Then the real work began in May of this year”. First and foremost, my desire is always to make old bikes better than they once were. Apart from this, I would be lying if I didn’t say much of my inspiration came from ogling over Viragos that I really admire from the likes of Hageman, Plan B, Moto Adonis and Classified Moto. Without seeing theirs, I probably wouldn’t have built this one”. “I knew there was certain things I had to have on the bike, like the GSX-R1000 forks, the aftermarket rotors, a bunch of the Motogadget goodies including the m-unit, m-button, keyless m-lock and motoscope mini recessed with LED pilot lights into a Cognito Moto upper yoke. There’s also the Harley Daymaker-style headlight and the Mikuni VM34 carburetors. But more importantly, I envisioned the black tank with gold flake and the aluminum side covers. I always knew those parts would be there”. “During builds like this, I love seeing those marks on the case where someone’s foot has rubbed every time they shifted, or a chipped cooling fin from some random event many years ago. These old bikes earned their scars and stories. Unlike my previous bike, this build went pretty smoothly. With exception of the learning curve on spraying the flake and some tedious carburetor tuning, it was a fairly fluid build. I’m guessing I’ll probably be punished on the next one for saying that, though”. “The hardest part of the build was the challenge to be different from the sea of other Viragos out there and to walk that fine line between tribute or stepping on someone’s toes. That’s why this bike sat in the corner of the shop waiting its turn; I literally thought of selling it a couple times, because I didn’t want it to be like every other one built”. So to overcome this, he nutted out a few opportunities. “Side covers that help accent the head. The choice in headlight. The type of rotors I chose. The hand-cut inserts for the rear wheel. And there’s plenty of other little details that people’s eyes will pick up on”. “My single favorite component is probably the tank emblems. They are made from stock steel, cut with a water jet, tacked onto a base plate and then cleared coated. I named the shop after my son, Charlie James. I wanted to show him what can be done with some sweat, tools and a little creativity. The tack welds are his, actually. While they might not be the prettiest of efforts, I couldn’t be more proud”.