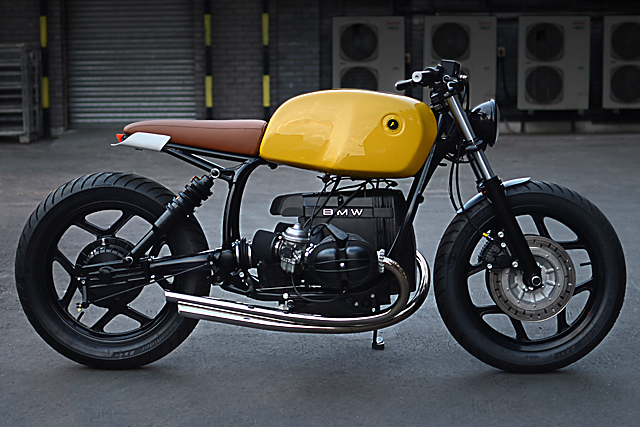 Genres are something that the human mind seems to crave. Show our primitive brains something that isn’t easily classifiable, categorised or catalogued and we get nervous. But when it comes to bikes, it seems that it’s always the customs that defy the genres that are the ones that outlast them, too. Whether it’s Hazan and his yachting bobbers, or Diamond Atelier and their stanced racing brats, the harder the bikes are to pigeonhole, the better we all seem to like them. So when it came time to post tonight’s bike, we took the fact that we had to stop and think about what to call it as golden mana from heaven. With its not-quite-cafe looks mixed up with a dash of brat and even a smidgen of modern sports bike, we reckon that this, the latest and arguable the best build from London’s Auto Fabrica, is destined for great things. We spoke to Bujar Muharremi, the shop’s co-founder and Creative Director to find out more. “The Type 10 was our first build to use a BMW airhead as the base,” said Bujar from their south-eastern UK headquarters. “With the infamous boxer engine being such a unique and distinctive piece of engineering, it is clear why it has become a firm favourite amongst both the purist and custom motorbike scenes.”

With this ‘Type’, the Auto Fabrica team clearly tried to take a different route to most other airhead builds you’ll see. Going for a sleek, almost cafe racer-ish stance, they then turned the thing on its head by adding some modern twists to the bike’s natural good looks and strong lines. And, as always, they were sure to apply their shop’s continuing ethos of ‘simplicity’ to the whole build. “From its launch, we have always had a fantastic response to the Type 10. With multiple requests to build more, we always saw larger potential in the design than just a one-off. So this is what prompted us to start exploring a second bike. As soon as we leaked the first rolling chassis image of the Type 10A, we had someone claim it as their own.” Needless to say, things quickly evolved from there.

As with most bike shops that are based on creativity and good design, Auto Fabrica have a tendency not to build the same bike twice. So with a lot of learnings from the first build, they started to evolve the design. Buja notes that they decided to go slightly narrower on this subframe, which has resulted in more sleek shape, as well as affording them the ability to run the lines of the tank quite naturally into the seat. Another notable evolution was the introduction of the straightened rear support tubes which replaced the original’s curved sections. As you can probably see, it manages to both simplify the bike’s lines and toughen its stance, too.

“Utilising the bike’s original tank, while also heavily modifying it, allowed us to clean up its look. We removed anything unnecessary and then hand-finished all our new construction features. We also redesigned the underside of it to relocate a modern battery within its walls.”

But with all this rampant minimalism, there was one area which they allowed themselves to add embellished details rather than to simplify, and that’s in the bike’s new rear light. “Louvred fretwork details are now a constant feature in our builds. It was kicked off by the unique and quite radical lighting & seat end features from our ‘Type 9’ build, and it has now evolved to find a place on the majority of our builds.” The Auto Fabrica team also run a successful design consultancy, where they work with private clients and companies in many varied design projects. Bujar notes that these sort of features and exploratory details are areas which they practice and learn from in both the automotive and product design sectors. “On the Type 10A, we have constructed the louvres vertically out of red perspex. We set out to mimic the shape of the rear using a simple and harmonious side profile. The louvres are set between the open ends of the subframe; it’s a construction that moves away from the usual looped rear section, and also manages to house the indicators neatly.” Adding some unexpected intricacy to this normally dry, functional area has allowed them to up the excitement and uniqueness to the build.

Meanwhile, the engine on the Type 10A underwent a full rebuild, during which all its worn parts were replaced. It was also upgraded with a 1000cc kit and underwent some mild work on the heads. The performance has increased accordingly, and the removal of so much of the bike’s original weight means that the Type 10A is an extremely quick bike with the handling and looks to match. “The pipes have been constructed from 316 stainless in our signature style; hand-made with custom engineered stainless baffles inside. This sculpts the sound to give it just the right exhaust note.”

A Motogadget ‘Tiny’ takes care of instrumentation duties, along with custom handlebar controls. The handlebars themselves are finished off with cross-stitched leather grips and bespoke aluminium ends.

The Type 10A was only required to be a single-seater, so the team tightened up the seat’s angles and went for a slightly narrower side profile. This was then trimmed in a premium, automotive standard, perforated brown leather.

One of the only processes which wasn’t kept in-house was the paintwork. As you can see, the bike was beautifully finished in the customer’s favourite shade of yellow; an extremely bold choice, but one that which compliments the exciting nature of the bike as well as looking great next to the original Type 10’s blue finish.

“Looking forward, the Type 10B is already in the design stage and we aim to add a little more aggression and to further evolve the approach while keeping the nature of the bike true.”

With the beauty of the original Type 10, and the way this evolution of the design has stepped things up, we’re certain the Type 10B will be even more of a jaw dropper than this. Is it possible? Watch this space.