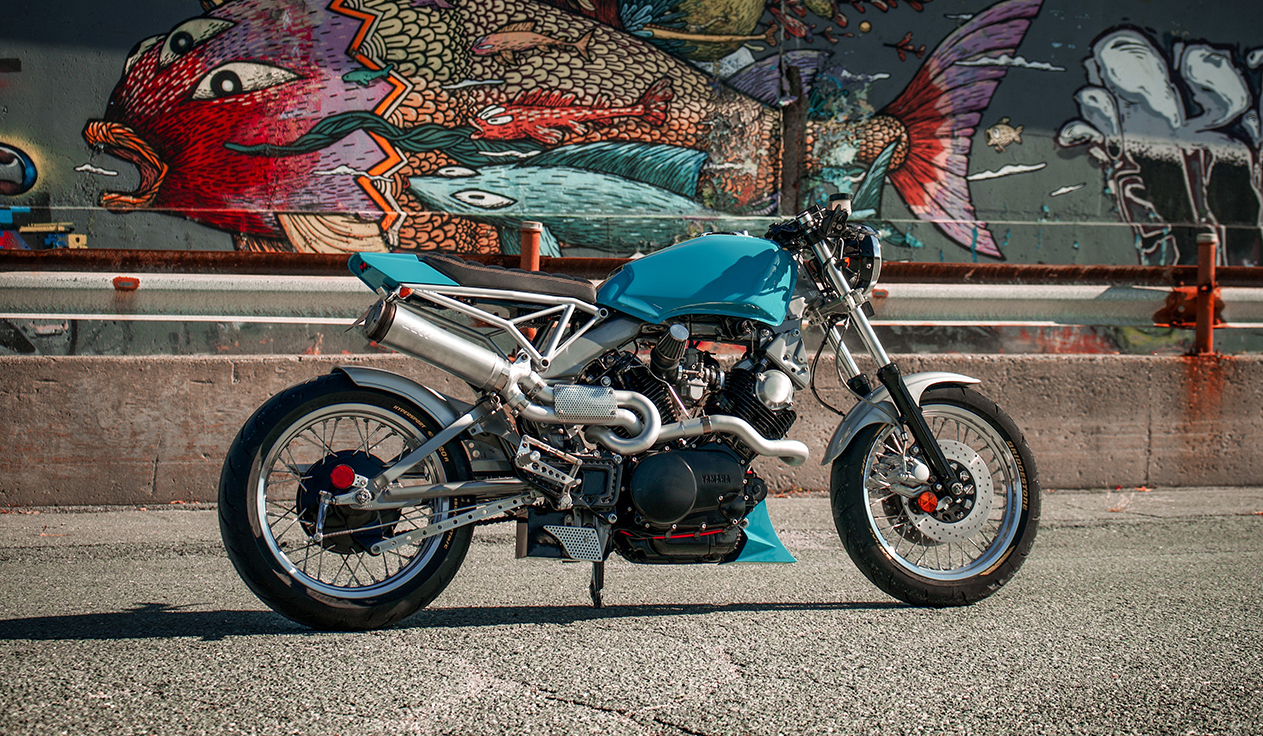 Whatever your creative pursuit, motorcycles like boy bands always run the risk of becoming another cookie cutter example unless you’re committed to truly following your own path. Among a select group of popular donors, the Yamaha XV is particularly susceptible, so to the rescue comes a man who builds strictly for his own personal tastes. Growing up around muscle cars, Manello Dorais brings an all new take to modifying motorcycles, having only discovered the joys of two wheels in the last few years. Hailing from Quebec, Canada, he operates under the name Bonafide Moto and has put his own unique spin on this stunning Yamaha XV920R, doing all the work himself with just a handful of tools.

“I really enjoy working on motorcycles. They give me a lot more freedom to turn something boring into cool stuff, making it completely different,” Manello tells us. Having learned from his father, four-wheeled muscle was his big interest, but a few years ago he tried his hand at spinning the spanners on a bike. “My first build was also a 920, but shaft drive. I was on the hunt for a chain drive one for a long time and found this 920R dirt cheap, so I couldn’t pass it up. It belonged to the husband of an old lady, who passed away. She told me it had been sitting for more than 22 years in the backyard shed. Everything was there but needed lots of love, It was a real barn find.”

Having seen more than enough XVs with upside-down forks, a Mojave tank and a floating cafe racer style seat, Manello was determined to go his own way. Aware that he wasn’t following any style in particular, the build incorporates aspects from many that he enjoys and is also setup for his particular style of riding and the seating position he prefers. And riding is what this bike is all about, so minimalism had to be sacrificed in areas to ensure it was 100% road legal and genuinely functional. But before he could rip up the local roads, he had to give the barn find a new lease of life.

Knowing what he had in mind for the engine, the CV carbs and their intakes would be tossed aside, “The frame was completely shaved to remove the old intake and CV pipes. This was a lot work and if you don’t own a Virago, you can’t tell it was done.” But the results are more than worth it with the rest of the frame being smoothed out and de-tabbed as much as possible and the swingarm given the same treatment. With the grinder spinning and fab work taking place on his garage’s workbench, a set of front fenders was next on the list. The front had to be bigger than stock to accommodate the rubber to come, while the rear started life as a TX500 unit, now cut down and acting like a hugger.

With the factory tank and rear end tossed away, Manello began looking for something to give his ride a unique style. Settling on an old Honda tank that fits neatly over the frame while exposing plenty of that V-Twin goodness! The subframe itself is as good as it gets for one made at home, the trellis design providing some industrial muscle. Steel was swapped for aluminium with the rear cowl next on the list and many of the angles designed to mimic those of the tank. Then it was time to fire up the compressor and all the paint from the frame to the three-colour paint scheme on the tank comes from Manello swinging the gun.

Time to get it rolling and high on the priority list was improving the handling and giving enough ground clearance to take corners with some knee down aggression without scraping. Wanting to stick with the standard forks, these have been rebuilt with an all new set of progressive springs and the oil to suit. While at the rear, the stock shock was never going to be up to the task and is instead replaced with one from a Kawasaki ZX900, rebuilt and repainted to suit! To up the braking power the rear drum is overhauled but remains in place. But the front end gets a set of drilled rotors, stainless steel lines and a Suzuki 14mm master cylinder for better feel at the lever.

“The enclosed 630 chain was converted to 530 and I picked up a set of xs650 hubs, got them laced with custom SS spokes and larger 17 inch rims front and back,” Manello explains. With the roller pushed to one side, work could begin on the engine and no stone was left unturned; first given a good rebuild and then all painted up to match. Taking a page out of his Hot Rod upbringing, our man in Quebec cut up a set of headers originally designed for a V8 Chev and made his own 2-1 exhaust from them to suit his own V engine. Properly ceramic coated, they hug tight to the lines of the bike with a custom heat shield for protection and a classic SuperTrapp spitting the sound.

“The wiring is now bare bone and the lithium battery takes the place of the centre stand. On the underside of the seat I hid a tool kit into a small tray.” This is one of many custom touches that have been added to the bike, that include everything from the hand made chain guard, to the engraved frame plates and heel protection, and even the custom mount for the Koso TNT-02 gauge. The standard switchgear was overhauled and not wanting to lash out on expensive clip-ons a set of old CBR units were found to fit the 37mm forks. The custom additions abound, all of which are designed to please Manello’s eye and make this bike his own. So if you live in Canada and like his style, Bonafide Moto might just be the place for you, if truly one of a kind is what you crave.