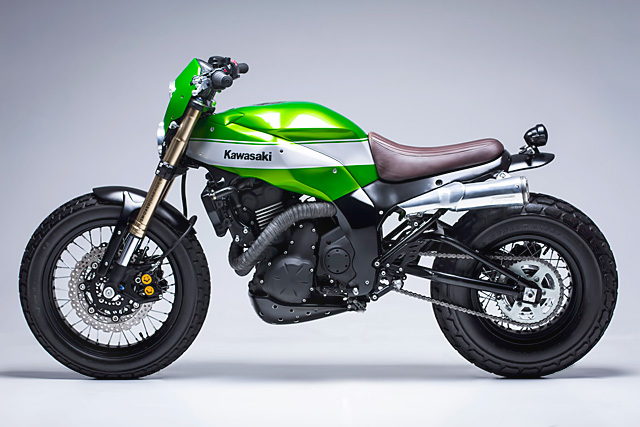 When your website has a tab for “Investor Relations” it’s safe to say you are playing in the big time, a one man operation it is not. But it wasn’t always that way for Smoked Garage Custom Motorcycles and this successful Indonesian motorcycle powerhouse is a genuine rags to riches tale. Founded in 2004 by Nicko Eigert there really isn’t a start date to his story but the completion of his first custom build twelve years ago has snowballed into a business that fills an entire warehouse and churns out an eclectic mix of incredible machines. Only a short drive from the Smoked Garage HQ is the largest Kawasaki dealership in Indonesia, PT DUTA INTIKA of Denpasar, who wanted a custom bike to show the public what you can do with a Kwaka; thus begun the design and build of Project X, a Kawasaki Ninja Urban Scrambler to wow the masses.

Not only is Smoked Garage close by but such a successful dealership can’t have any old workshop build them a ratty example and put it on the showroom floor. The custom bike had to be perfect in every way and the creator needed to be capable of building any concept that came to mind. For Nicko this isn’t a problem “We have customised everything from small 60cc bikes up to 2100cc S&S engines, so the build that we do is always different, we are not one of those shops that only does one particular style; we love to do different things and also learn new things”. One of the reasons Nicko can build just about anything is not just down to his own skills but the 16 mechanics, graphic design, admin, retail and parts builders he has on staff; OCC eat your heart out! To get the project underway a brand new 2016 Ninja 650 was delivered and while the boys pulled it apart Nicko sat down with his client to draw up a design. “We started to go back and forward on some design concepts and where we were both always looking at was an Urban Scrambler, so from that point we were agreeing that Holographic Hammer’s concept of Kawasaki ZX10 is the best candidate for this project.” So back to the bike lift and the team started coming up with ways to turn a modern machine into a retro rocket with the best of both worlds. With the fairing removed from a modern machine the aesthetics of the frame can often leave a lot to be desired, so the team has fabricated a tank, panels and covers that integrate seamlessly from front to back with the tank all the way to the rear guard custom crafted Smoked Garage items. Despite having to cross over onto the subframe, wrap around various shapes and angles one thing remains the same; the bodywork gap is a perfect 2mm all the way around. As Nicko says it’s just enough to slide a thin credit card through without being too loose while never getting stuck. That level of quality is extended to the front and rear guards that give the right retro appeal while still adapting to the modern machine without looking like they were just slapped on. The front unit is a combination of a traditional steel guard with the supports mirrored off of the factory items for an incredibly clean finish. The shortened subframe is more of Smoked Garages handy work, considerably shorter than stock it also holds a hand fabricated box for all the electrics that don’t fit under the new tank. The new frame raises the rear to mimic more vintage flat top frames that allows the new seat base to be crafted to hug the lines of the subframe covers and run up onto the tank. Layered with foam the top section was shaped until everyone was happy with the finished result and then it was time to wrap it in chocolate dark leather and double stitched for durability. Having given a new bike old looks it would have been easy to bolt on a round 7″ headlight and call it a day but Nicko explains “we build bikes that people would probably call future retros.” So instead a dual headlight setup was created with the use of two unique LED lights attached in an over-under arrangement that is mounted with brackets that have been bodyworked into the triple trees for a factory quality finish. With machined bezels they look trick and with the custom fairing they create a front on look like no other bike on the road. Into the booth and the paint scheme has been taken straight from the Kawasaki showroom floor with the primary colour the famous Lime Green. Broken up by White graphics the Green flows over the tank and seamlessly onto the frame covers making it almost impossible to tell where one part stops and the other finishes. The same trick is achieved towards the rear of the machine with Green turning to frame matching solid black but not at the actual meeting points of the metal for another visual trick to fool the eye. All of which does an amazing job of combining plastic, aluminum and steel into what appears to be bodywork made from a single piece of material; all the while covering the unsightly frame. With both companies based in Bali the tyre choice is straight from the old school surfer’s scrambler of choice the Suzuki RV125 VanVan and its factory fitted Dunlop K180’s. But with factory alloy wheels measuring 17″ at both ends a change would have to be made and it was the perfect time to go to spoked setup. Up front an 18″ lightweight rim is laced up to a custom Smoked Garage hub that has been wrapped in a 120section Dunlop. But it’s out the back where things get a little crazy, down to a 14″ rim, spoked up and an 180 section tyre fitted it’s unlike any other Ninja you’ll encounter out on the roads. The look is immediately transformed but controlling the rubber wasn’t going to be left totally factory and although the build was initially slated for 3 months this was one of my areas that doubled the time to get things just right. New Showa USD forks replace the standard telescopic items with a conventional bar adapted to the upper triple clamp wearing Biltwell grips. While out back the stock tubular swingarm is controlled by a Showa monoshock with the preload adjusted for the new rubber.

But if there is one advantage to picking the Kawasaki Ninja 650 as the basis for any build it’s the unlikely hero, the 649cc parallel twin engine. It’s dominated the lightweight TT at the Isle of Man so much in recent years that most of the other manufacturers have simply packed up their bat and ball and gone home. While proving its versatility the reliable twin cam engine is also becoming a popular pick for Flat Trackers in the US. A new stainless exhaust has been fabricated for the single side Scrambler look but Nicko pulled out one of his many tricks routing it through the body work that neatly buffers up against the pipework. Heat wrap and a custom shield prevent it from melting the all new panel and paint work and a tunable SuperTrapp muffler barks out the rear. To ensure the safety of the engine when Project X is finally let off road, a bash plate covers the sump, drilled for airflow its belly pan like design gives a more subtle appearance. The fittings and fixtures are a mix of factory parts and custom items just as the dealership had requested. The stock digital clocks remain in place but the big factory turn signals have been swapped out for some of Smoked Garage’s own design. A vintage barred out tail light looks right at home on the old school rear guard while the new pegs and foot controls are machined to do their job without making a fuss. “We kept refining the motorcycle as we wanted to make sure the bike not only looks really nice but is also really nice to ride and we can with confidence say it rides like a dream!” Nicko is understandably proud of not only his team’s latest creation but their ability to work together as a company to give a major manufacturer something to show their customers that is unlike anything else they’ve seen. With the Urban Scrambler Project X now ready to hit the factory floor of a Kawasaki dealership in Bali you have to wonder if the big wigs at Team Green are going to take Nicko’s design and make it a global competitor to the latest Ducati and Yamaha offerings; if it helps, I’ll take two.