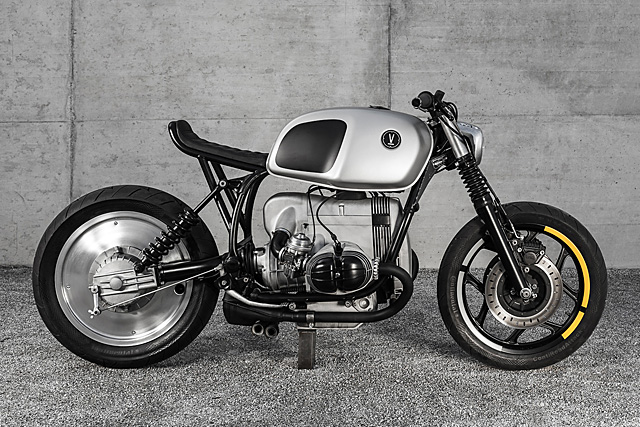 The word ‘minimalism’ gets thrown around a lot these days. Ever since the rise of the post-WWII art movement of the same name, it seems like every man and his monochromatic dog have become experts on the subject. But I’m here to tell you that despite what you may think, most people don’t really know what minimalism actually is. ‘Less is more!’ the peanut gallery blurts. Well, yes but mostly no. Follow that logic to its, erm, logical conclusion and you’ll end up with nothing at all. A more practical definition of minimalism is to do more with less or to make the most out of as little as possible. Smash cut to a workshop somewhere deep in an Austrian winter. We see two young men as they consider a motorcycle. It’s so stripped back, it’s barely there at all and yet its visual impact and physical presence is enough to stop you in your tracks. They are Vagabund. The bike is a new BMW they call ‘V05’. Vagabund is a new custom motorcycle shop from Austria. They are based in Graz-Styria and the were founded at the end of 2015 by two guys, Paul (a designer) and Philipp (a mechanical engineer). “Both of us wanted to work on vintage motorcycles because we love these old pieces of metal. For some it’s only a lifestyle product or a commercial vehicle. But to us, it’s nothing less than a functional piece of art.”

Trying to find a compromise between usability and design with each motorcycle they build is clearly very important to Vagabund.“We are minimalists and perfectionist. We will always try to use handcrafted parts wherever possible. We love the challenge of building motorcycles that are both nice to ride and beautiful to look at.” Bar the painting, pretty much everything these two do is by their own hand. And when it’s not, it’s likely because they are collaborating with various local craftsmen or artists to bring something unique to their builds. “Our inspiration for almost every project is to build very clean and minimalistic bikes which are nice to ride and are still legal for road use.” And for anyone who knows the Austrian (or for that matter German) attitude to modified vehicles, that’s quite a bold statement. “In the case of our R80RT, the main focal point was to combine a kind of futuristic-yet-vintage design theme that included both some classic, handcrafted aluminium parts and some modern details like the yellow and grey wheel rim you see here.” Of course, you can be as minimal as you like, but at some point you’re still going to have to get your hands dirty. For Paul and Philipp, that started with some of BMW’s legendarily arcane wiring. “We found it’s best to just get rid of all the puzzling BMW wires and start from scratch,” says Paul. Step two was a modification to the tank’s position, ensuring it was in just the right position for the lines the boys had in mind.

“Next came the positioning and welding of the newly constructed rear frame. Again, the lines of the frame and seat were crucial, but now they had to work with the tank and not just by themselves.” A lengthy clean-up of the frame’s remaining sections then took place. As you can see, absolutely nothing unnecessary was left in place. Next came the construction of the bike’s beautifully simple exhaust system and an extended upgrade list for the bike’s smaller details including the battery placement, electronics, lights and controls.

With the home straight in sight, Paul and Philipp got turning and milling on the bike’s vast array of custom parts while the bike itself was being measured up for all of its bespoke aluminium details.

“The headlight is a unique piece designed by us and handmade out of a flat piece of aluminium by local metal artist Berni from Blechmann. He’s someone we often collaborate with.” This teamwork was not only responsible for the bike’s fairing, but also for the ‘moon’ cap on the rear wheel and the very slick under-seat tail light housing.

Other nice details include the Motogadget ‘M-blaze Disc’ bar-end indicators, which are matched to the ‘M-blaze Pin’ rear turn signals that are inside the ‘camouflaged’ license plate holder. Then there’s the modified R80RT fuel tank, the Continental RoadAttack 2 rubber, the R75/5 airbox and starter cover, the Kustom Tech ‘Grimeca’ brake master cylinder and the Domino ‘Classic’ clutch lever. For all those ‘Where’s Wally/Waldo?’ fans out there, the lithium-ion battery can be found under the tank, the speedo is another Motogadget unit that has been incorporated into the top triple clamp, and the horn and signal buttons are inbuilt into the ‘bars. Oh, and that tank roundel? It was CNC-made as a one-off piece just for this build. “Our favourite part on the finished bike would have to be the handcrafted headlight mask and the moon cap.” For those out there taking notes, make no mistake; it’s those two components that almost single-handedly ‘make’ the bike. Looking to shift into bike building? Master the deft transformation that touches like this can make to a bike and you’ll be most of the way there. But it’s interesting to note that the build wasn’t all wien und rosen…

“We are real perfectionists, so finding the perfect shade of silver for the tank to match the other aluminium components was a real struggle. Believe it or not, we painted the tank three times until we found the perfect match.” Now that’s commitment.

As you can see, we’re pretty smitten with the bike. It’s no secret that there’s a real oversupply of BMWs in the custom scene at the moment. But for a young shop like Vagabund to be able to take the Bavarian bull by the horns and deliver something as unique as this from such an easy-to-make-clichéd donor bike really deserves some recognition. So how would we describe our excitement to see what they come up with next? Minimal at best…