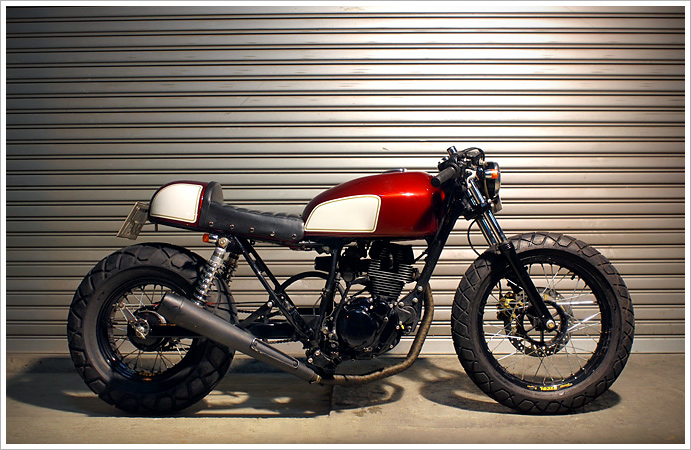 If you could pick any city on earth to settle down and customise bikes in, we think it’s a safe bet that Singapore wouldn’t be at the top of many lists. In a similar fashion to Hong Kong, Singapore has very little tolerance for vehicular modifications and a few of our Pipemates who live over there have told us that you can be defected for something as minor as having non-standard rubber on your rims. And heaven help you if you were to do something crazy like add a new exhaust or tank – that’d result in your bike being impounded. So as you are gazing over the sweet, sweet lines of this little Yammie TW keep in mind that it’s creators, Matt and Merv from Vicious Cycles Singapore, risk severe punishment if they were ever caught riding it in public. Apparently, the last biker who dared do this was forced to watch the movies “Wild Hogs” and “Torque” on an endless loop for an entire month while he was simultaneously made to delete all his browser’s cool bike bookmarks one by one. And that’s not all. Afterward, when he still wouldn’t swear against his beloved custom bikes they forced him to stay in a remote house at the end of a very long, windy road. They then gave him a Wrenchmonkee’s original with all the bells and whistles and covered every inch of the road with lard as they waved goodbye. Bastards. Here’s Meryvn. “The TW came to us after the owner crashed it and it’s front end was trashed in the accident. Here in Singapore, TWs are either stock or running a street tracker mod. So we thought, “wouldn’t it be nice if we made something different?” Therefore we proposed a café racer idea we called “FTW“. The owner loved it and wanted us to get to work on it right away.” “The parts put into the FTW200 were recycled or taken off most Yamahas, brakes and controls were off the WR200. The clip-on handlebars for an instance came off the FZR150. The headlamp with integrated speedometer was off a vintage Yamaha.” “Older TW’s came with front drum brakes so we modified another front hub and fitted on a disc brake for better braking. The rake was calculated and in order to achieve the slammed look, we had to stretch the swing arm to compensate the shorter wheelbase. Works Performance rear shocks formally on a Harley were used for the stiffer spring rate and better rebound damping. All in the name of a slammed ride with improved handling.” “Due to the strict laws in our country,
the custom exhaust header was wrapped”

“The fuel tank was modified using the RX-K tank components.  Sides were then cut to achieve the shape we visualized. We welded on another tank base to provide the shape and the beefed up look. A custom fiberglass rear was fabricated to compliment the shape of the tank and since we wanted to keep everything neat and tidy, we made the tail lamp integrated and hid a battery in the hump.

Due to the strict emission standards and exhaust pipe laws in our country, the custom exhaust header was wrapped. A standard muffler off a Yamaha 125 cruiser was also used to keep the decibels low. Exhaust tip was fabricated for aesthetic purposes. We kept this bike as minimal as we could and to just enjoy the awesomeness of riding a simple machine.” We think it’s great to finally see someone do something with the much-in-need-of-a-kick-up-the-jacksie TX scene. No disrespect to the cool street tracker with the “ride on water” look, but surely such a cool platform deserves a little more effort than it’s seen in current years. Good on the boys from Vicious Cycles for giving it a go – we really look forward to see what they come up with next.

PS. Feed your addiction – get all the latest from Pipeburn by subscribing to our Facebook and Twitter pages.