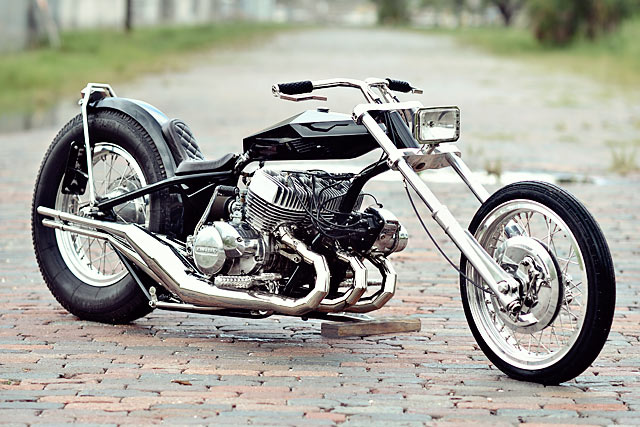 Lately we’ve been featuring some custom rides that still manage to be clean, practical motorcycles. Bikes you can pillion on, motorcycles you could take shopping – bikes you could take to meet your mum. But just in case you thought us here at Pipeburn HQ were getting sensible here’s a chopper designed by FNA Custom Cycles run by a 1972 Kawasaki 750 H2 two-stroke, a digger so mental we’re going to get it sectioned. Now Florida-based FNA fabricate all sorts of mechanical mastery for custom motorcycles. Head headcase is Eric, a dude who as mad as he is clever. ‘I got this Kawasaki 750 H2 engine a few years ago when I repaired a couple of springer front ends,’ he says. ‘I had it sitting in the shop after putting fresh rings in it’. And it sat, dormant, for nearly two years before one of his friends, Matt White – a guy so cool they named a colour after him – prodded Eric to make something pretty wild. ‘I decided I wanted to do an old style magneto-ignited digger bike,’ Eric says. ‘And I wanted it to steer well and not be a pain to ride’. So the whole frame was designed and built in-house by FNA, who fabricated up the goose-necked hardtail with a few neat touches. The leather seat flips up for easy access to the capacitor and the oil filler. The tank, more 70’s than a carpet of chest hair, was set into the frame. The period vibe continues down below. ‘I’ve always liked the style of Triumph leading shoe drums,’ Eric says, ‘and they actually stop pretty well too.’ But there was a problem. He’d intended the whole bike to be polished within an inch of its life, but the standard Triumph hubs were steel and don’t respond all that well to a buffing. Instead he used early 70’s conical hubs with the same 8″ brake size, strapped to a sportster wheel at the front. But the real highlight of this bombastically bodacious build is the ridiculous ‘72 two-stroke powerplant, which Eric wanted to scream like a banshee. The key? A 50’s era 6-cylinder Fairbanks unit. ‘Making a 60-year-old magneto work on a quick revver like this was a bit of a task,’ he explains. ‘I had to reverse the rotation and update the bearings, as well as time the timing belt so it’d fire every 120 degrees of crank rotation. Then two wires per plug and it’s firing properly’. Such boffinry continues with the exhaust, with Eric turning to the internet to help him figure out the proper chamber dimensions. ‘We started out with a $18 dollar program off the ‘net that calculates the size after you punch in your bore, stroke, port timing and desire for RPM. It then spits the dimensions for cone sizes. We put that in a 3D CAD program. We then laser cut and rolled each 15 piece per pipe for the exhaust system and put in place.’ At the end of the day this whole bike acts as a rolling showcase for the exceptional parts that FNA fabricate. The kickstand, footrest, hangers, fender and lights are all made by the Florida madhouse, with a few favours called in by friends. The Kawasaki’s paint was completed by his Uncle, Terry Thompson, and the miles of gleaming alloy and steel were buffed up by local company Woodstock and a gentleman known as John Mooney, guest starring some small flashes of chrome served up by Brown’s Plating. How long did this Kawasaki madness take? ‘Around 900 hours to complete, over the course of a year and a half,’ Eric says. And not a moment of that was wasted. All bow down before your new God of ostentatious 70’s excess – you won’t see another bike as mental as this for a while.