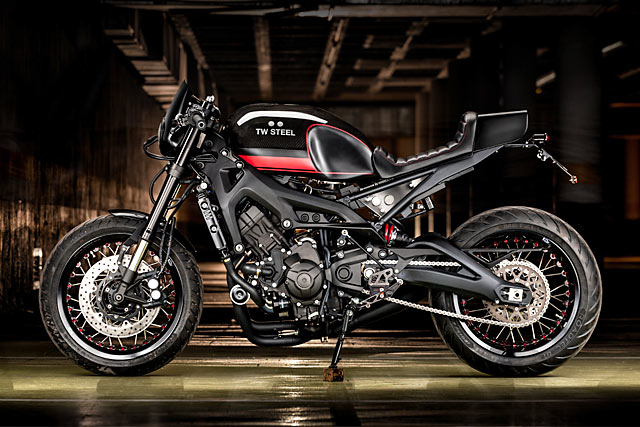 TW Steel is a Dutch watch manufacturer that builds quality timepieces large enough to beat a man to death with. Recently they’ve been dabbling in the custom motorcycle scene, commissioning a series of bikes based around Yamaha’s incredible, unique-looking lineup. The latest builder to throw their sizeable hat into the ring on behalf of TW Steel is Spain’s Macco Motors, with their brand spanking new XSR900 cafe racer dubbed ‘The Desperado’. Macco Motors is the end result of two lifelong friends indulging their love of motorbikes. Jose and Tito had known each other for over twenty years and took a gamble when they flung open the doors to Macco in 2011. And the gamble paid off – with the small Spanish workshop producing all manner of stunning bikes. Most of them don’t stay in country either, with 90% of their builds destined for customers scattered around the world. So it’s no surprise that TW Steel approached them for a build. Crossover projects like this can be kind of naff – and often forced and strained. But there is something a little ‘watchy’ about this bike. The mix of dark colours, textures and materials does line up with more classic, traditional watch designs. TW Steel figured the guys from Macco would be a good choice for this kind of pairing, with Jose and Tito always having aesthetics at the forefront of their minds when turning to the tools. ‘We care for detail, and look for harmony in the bike’s curves and shapes, while keeping the essence of the bike intact,’ Jose says. Kind of sounds like a watch, no? Now in standard trim the brown leather and brushed steel that makes the XSR900 already looks like a watch, but the guys from Macco had more ambitious plans afoot. They started with the front of the bike, trimming down the top yoke and relocating the ignition to the right hand side of the frame. Interestingly, Jose and Tito kept the standard speedo and tacho and just modified the mount, deciding it looked nice and light as is. [superquote]“And that tank? It’s a legitimate once-off carbon fibre model. In their opinion it’s their favourite part of the build.”[/superquote]

A new bracket was made to drop the gauge assembly behind teeny tiny bikini fairing, matched to the fun-sized headlight. New LSL clipons and levers brings the riding position down over the tank. And that tank? It’s a legitimate once-off carbon fibre model. In their opinion it’s their favourite part of the build. Unsurprisingly it was also the trickiest thing to get right, with lots of sanding and cutting involved to get it working correctly. Here there’s a bit of visual cheating done by the team, and it works really well. The carbon fibre tank was based around the lines of the standard model, which has a very ‘2017’, very sculptured look about it. The team found a way around that with some cleverly placed red highlights that straighten out the lines along the base of the tank. Clever touch, that. Back at the rear the guys scratch built a single seat unit. The upholstery is finished in soft black leather with red accented stitching. Down below the red highlight theme continues with the beautiful Kineo rims, clever little hoops that allow you run tubeless tires. Performance trickery is handled by YSS suspension components and a carbon fibre tipped SC Project exhaust that’ll make the most of the growl spat out by the 115 horsepower Yamaha triple. [superquote]“The end result of all this work is a fantastic twist on one of the greatest bikes produced by Japan in the last ten years.”[/superquote]

The end result of all this work is a fantastic twist on one of the greatest bikes produced by Japan in the last ten years. The guys from Macco have turned a pretty unique-looking beast in stock trim to a classy looking modern cafe racer that doesn’t sacrifice any performance in search of its beauty. But we’re not the only people to think so, with TW Steel soon to release a watch based on the colour palette of this bike.