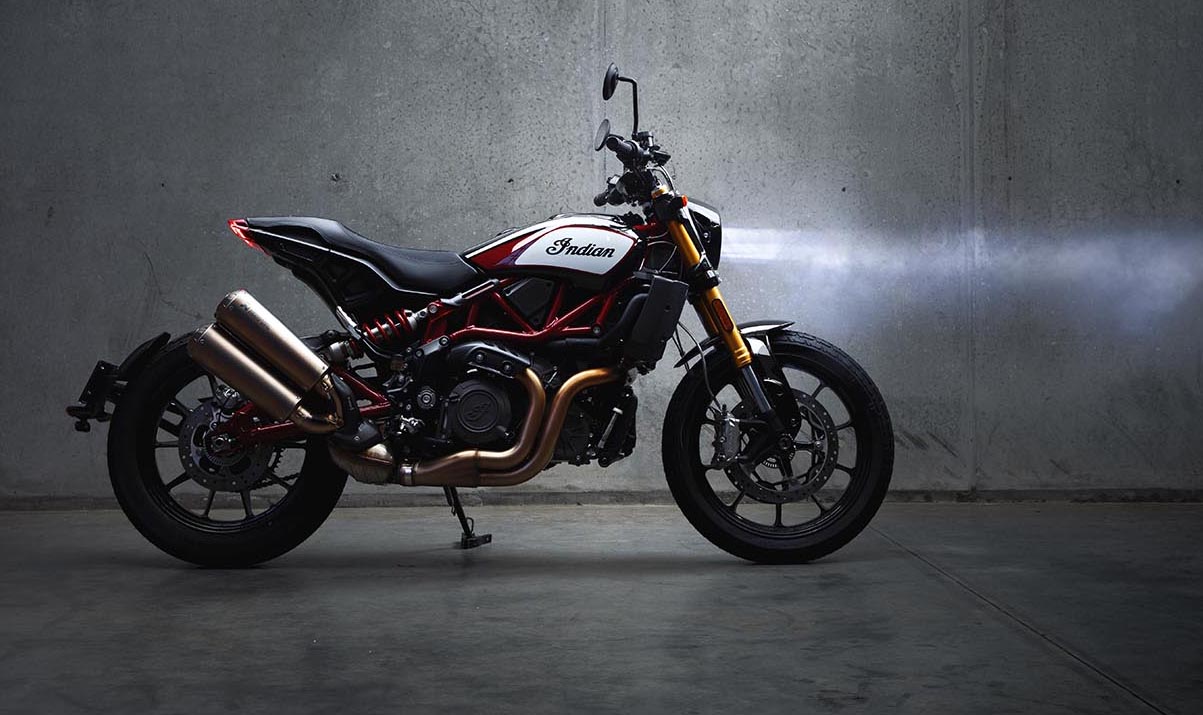 When the FTR1200 concept photos first came out back in 2017, my first thought was if they make this bike I will sell my kidneys to buy it. A few years went by; when they did finally release it, it actually looked pretty close to the concept photos. The only thing that was missing was the high pipe that I loved. It still looked great but then I started thinking my kidneys might come in handy later on in life – my liver is definitely not worth anything. So when Indian offered me the FTR1200 S Race Replica for a few days I couldn’t wait to jump on and ride this thing. I’ve been itching to ride this machine for a long time! Not to mention I’m just keen to go on a long ride after this whole covid sh*t show.

I had to travel over to the Indian Dealership in Sydney to pick up the bike. The manager thought it would be cool to see its unboxing. This particular FTR had only just landed, so I was keen to see it being unboxed – never ridden a bike fresh out of the box. So after the legal contracts about them owning my kidneys if I crash it, I was given the keys to this brand new FTR. Just as I was about to ride off into the sunset, the charismatic sales guy said “just don’t be one of those guys that brings it back with a thousand kilometres [600 miles] on it.” This struck me as odd, because isn’t that what this was all about? I just smiled and replied that I wouldn’t be that dumb.

But I did keep thinking about what the Indian sales guy said. My whole life I’ve usually done the opposite to what people tell me to do. I was torn. I could use the smart side of my brain and bring the bike back with not much riding or I could try and get as many miles as I could on the bike… almost take it as a challenge. My dumb brain started doing calculations about how long it would take me to ride around Australia but then my smart brain kicked in and ruled that out – because it thought Indian might not ever give me another bike if I did. But the review would be worth it, my dumb brain said! Then I thought I’d leave it up to the bike. If it was fun to ride then it would be hard to stop riding it… right?

As I hit the freeway on my journey home I realised the screen was in miles per hour (USA spec) and I needed to switch to kilometres per hour. With all the speed cameras on the road I was travelling on, I needed to do this quickly; I was riding a lot faster than I thought. Luckily the swipe screen worked with gloves and I managed to swipe my way through the settings to change the screen (I know, I should have pulled over).

The screen itself is a little bit chunky and looks like a Nintendo Switch mounted to the bars. At first, I thought it was just a glorified speedo, but I came to love it. It makes it super easy to see all the info about the bike in large format. You can even choose different retro speedo designs in normal and dark mode. I did have issues syncing my phone to the device and it said the Indian App didn’t work with the FTR1200, which is strange. Also thought the screen would have a built in sat nav. It likely uses your phone navigation but unfortunately I couldn’t get it to work.

As soon as I sit on the FTR1200, it feels like the seating height is a little too high for my 5” 10” height. The specs say the seat sits at 184cm – to put that into perspective, the BMW GS is only a tad higher at 190cm. The riding position is upright, almost like a street fighter, and puts you in a position to ride with aggression. Not sitting back and cruising. It does feel heavy when standing still but as soon as you’re riding it feels light and nimble. As I ride along the city roads there’s one thing I notice: it doesn’t like going slow in peak hour. Every traffic light is stopping this weapon getting to some higher gears – I can almost feel the grumbling.

Anyway, I cleared my empty diary for the weekend and decided just to ride some of the best roads around the outskirts of Sydney all weekend and try and clock some miles on it – but not too many, of course. Once I started riding the bike on the open road I literally didn’t want to stop. This thing is a fun machine. I now wish I’d listened to my dumb brain and tried to ride around Australia. The 1200cc engine delivers loads of power and the bike handles like a sports bike. Being stoked with the experience, I decided to organise a few rides with people I hadn’t seen for years and ended up planning four rides with different groups of friends over the weekend. Didn’t matter how far away they were – I was happy to come visit.

On paper, the bike is quite heavy – Indian says the bike is around 225kg (490 pounds) – but when in motion it doesn’t feel that heavy at all. It actually feels pretty agile when I hit the twisties at speed. Part of the reason is the low centre of gravity. The massive looking ‘fuel tank’ isn’t a fuel tank at all – there’s an airbox in there instead. The real tank is under the seat and the battery is at the front of the engine next to the oil cooler. The one downside of this is that the tank doesn’t hold much fuel. The most fuel I managed to squeeze into the tank was around 13 litres. Also, filling up is quite tricky, due to the shape of the interior of the filler – I’m not sure if that was just me, but it took a while to get used to.

When it comes to power, this bike is the equivalent of an American muscle car. It’s like the Mustang of motorcycles. They might be heavier but they just deliver raw unadulterated ponies. The engine is a 1200cc V-twin that pumps out 120 horses and 87 lb-fit of torque. That might not sound that impressive, but this thing feels likes it’s delivering 200 horses of power. Every gear feels like it has so much more you can milk before changing again. The throttle is super responsive and really does feel like a sports bike when accelerating.

And let’s not forget the impressive components this bike has. The front wheel has dual Brembo M4.32 mono block four-piston calipers and can stop on a dime. On the rear is a Brembo P34 two-piston caliper which also delivers massive stopping power. All the models come standard with ABS, but with this race model, you can turn the ABS off on the LCD screen. You can also turn the traction control and wheelie mitigation off. There’s three different modes you can choose – Standard, Rain and Sport – and as you can imagine the Sport mode is the most fun. It essentially gives you quicker throttle response, engages ABS/TCS, and disables the wheelie mitigation – because who doesn’t love a wheelie?

I’m not going to go through all the specifications of the FTR because it’s been covered numerous times by multiple publications and YouTube reviews. But with the bike becoming more affordable, you don’t have to sell a kidney to buy one. As a whole package, you actually get a lot of bike for your money, with an impressive list of high end components. The Akrapovic exhausts are standard on the Race Replica model, but cost extra on the base model – but they are well worth it and make a beautiful note.

After spending three unforgettable days riding the FTR1200, I woke up on Monday morning with the Monday blues, made worse because I had to return the bike. I really didn’t want to give it back. The FTR is a blast to ride and had me grinning whenever I was riding it and that’s exactly what motorcycles should do. As I arrived at the Indian dealership, I realised I hadn’t been keeping track of how many miles I had done. I look down at the large digital screen and it says 955km. At least I wasn’t going to be one of those idiots that puts a thousand kilometres on it – apparently my smart brain won out for once.

[ Photography by Declan May ]