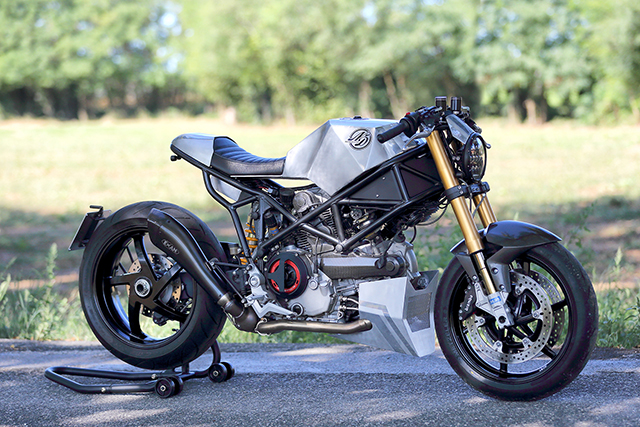 Unlike the Hypermotard, MH900e, Supermono, and Sport Classic, Pierre Terblanche’s design for the original Ducati Multistrada received a less-than-positive reception from the motorcycling public upon its release. Routinely included (and ranking high) on lists of the ugliest motorcycles in modern history, the first-gen Multistrada was all kinds of awkward. Between the cyclops headlight, a windscreen and fairing top that turned with the forks, and a sporty 999-esque tail that just didn’t mesh well with the trailie-vibe, the Multistrada was largely regarded as a visual mess. 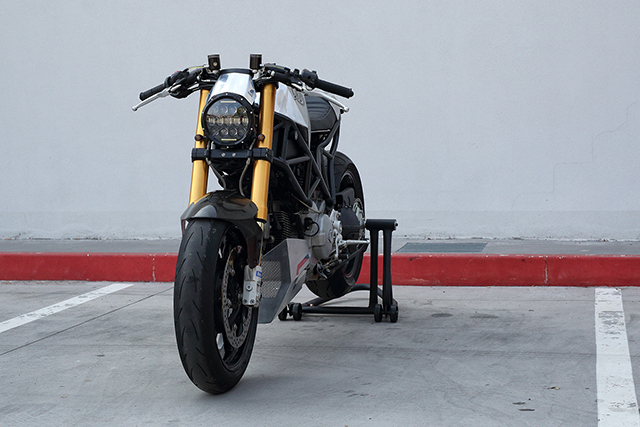 Underneath the ill-favored bodywork however, the Multistrada boasted a solid engine backed by a well-engineered frame and quality components — the up-specced S model even more so. With top-shelf Brembo brakes and Ohlins suspension fore and aft, and a healthy 92hp on tap, the Multistrada 1000S DS is a competent performer that lends itself particularly well to customization. So when a customer approached Northern Italy’s Nico Dragoni Motociclette with the idea for a modern Ducati build, Giada and Nico, who run the operation, suggested starting with a 1000S. 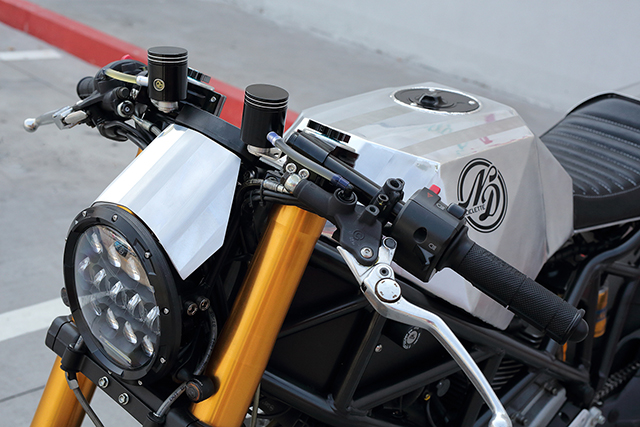 “The client requested something that would perform well and not have too extreme of a riding position, but beyond that, he gave us carte blanche on the project,” Giada tells us. The duo started by completely stripping down the 2005 S DS donor to a rolling chassis. The stock subframe was lopped off and a new, shorter hooped unit was added, jetting up at a steeper angle and following the existing diagonal line of one of the steel trellis frame’s cross-sections. They also crafted U-shaped sections underneath that support the above framework and help to mask the profile of the build’s new sub-seat battery and electronics box. 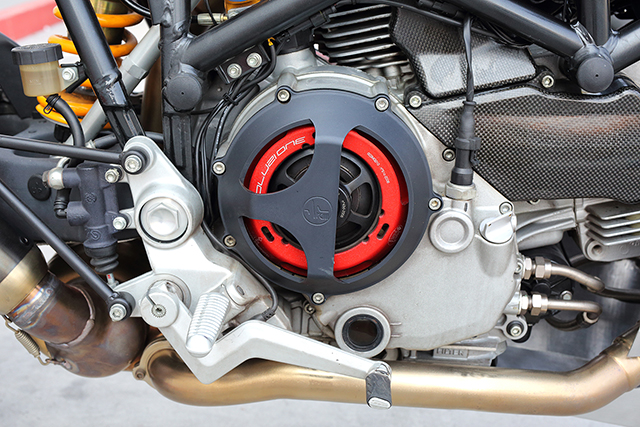 “Sadly there wasn’t enough space under the tank for the battery, so we made a custom box under the seat,” reveals Giada. The original Magneti Marelli instrumentation was a little too bulky (not to mention mounted way too high) so the two-man team opted for a multifunction digital Koso display. Because the Ducati’s immobilizer is built into the original instrumentation, the shop had to turn it off and fashion a new wiring loom for the Koso unit. 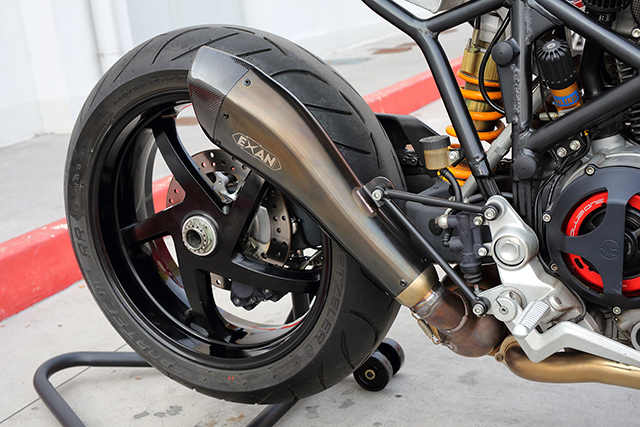 “We tried to simplify the wiring as much as possible and remove anything that wasn’t essential, but it was really tricky making the new display work with every single function of the bike. We pulled it off though,” explains Giada. The bodywork is where the bike starts to really come together. The first piece they made was the tank. Folded and shaped by hand, the new cell is made of 4mm aluminum sheeting reinforced via a ribbed bottom that extends back and serves as the build’s seat pan. The new tank also houses the fuel pump, and the shop has replaced the first-generation Multistrada’s notoriously finicky fuel-level sensor with a floater borrowed from a boat of all things. 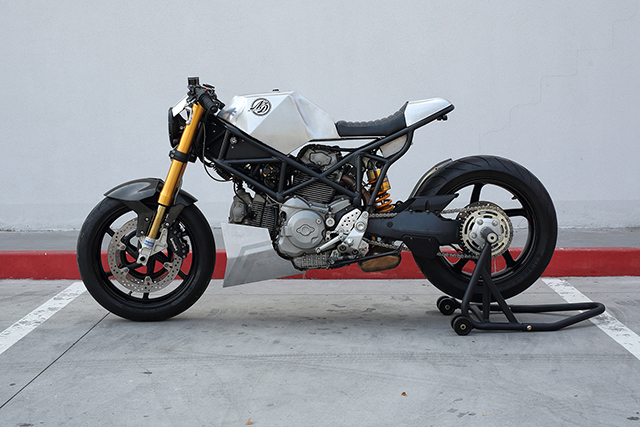 Behind the front-wheel is a sharp, angular aluminum belly-pan with a meshed front insert and a notched out area for the exhaust. A custom leather seat now rests in the contours of the one-off frame and rear bodywork, capped off with an aluminum tail cowl that can be removed for two-up riding (once the passenger pegs are put back on). Rounding out the bodywork is a headlight shroud covering the top of the shallow modern LED unit and lining up neatly with the top of the new display. 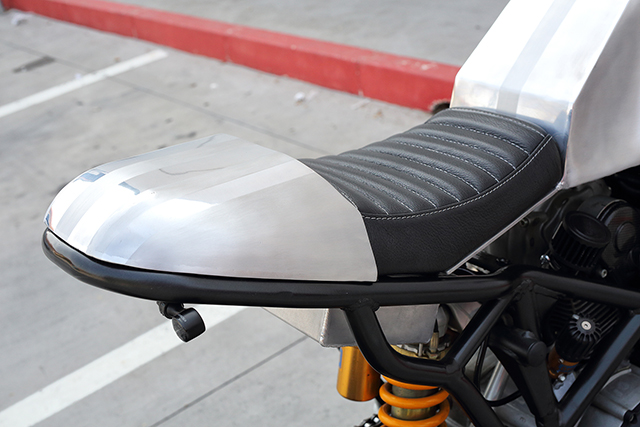 To “underline the racing soul of Ducati” the shop installed a carbon fiber front fender and timing-belt covers, as well as an open RCM clutch cover. For the turn signals, ND Moto went with pairs of vintage-style Highsider LED units front and back. The rear indicators actually double as the build’s taillight too. 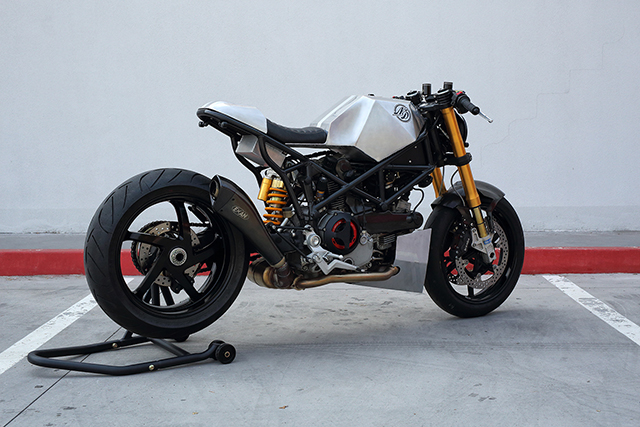 The 1000S DS’s Ohlins and Brembo bits were deemed plenty capable and thus remains on the bike. The stock foot controls are also still in play, but the high and wide factory handlebars have been swapped out for a more appropriate set of CNC’d clip-ons. Other minor odds and ends include a quick-release fuel-cap, a pair of Rizoma-style billet reservoirs, and a custom swing-arm-mounted license plate hanger. 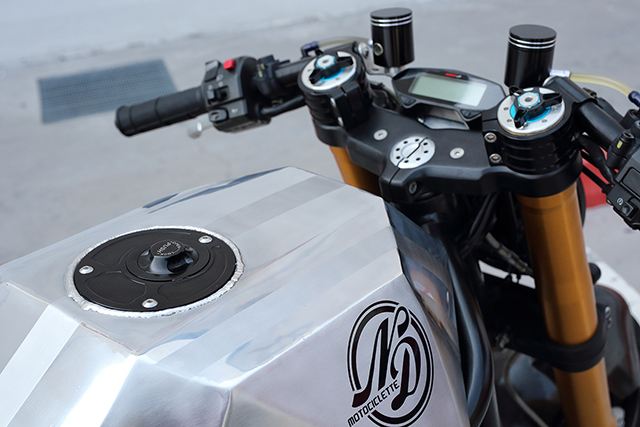 To highlight the new bodywork, the aluminum was left largely bare. “We decided not to paint the bodywork and instead decorate the aluminum in polished stripes over a satin finish in order to obtain a vintage racing style on a modern surface. The frame and wheels received a fresh coat of the Multistrada’s original dark grey, and the stock gold-anodized fork adds a splash of color to the mix,” says Giada. 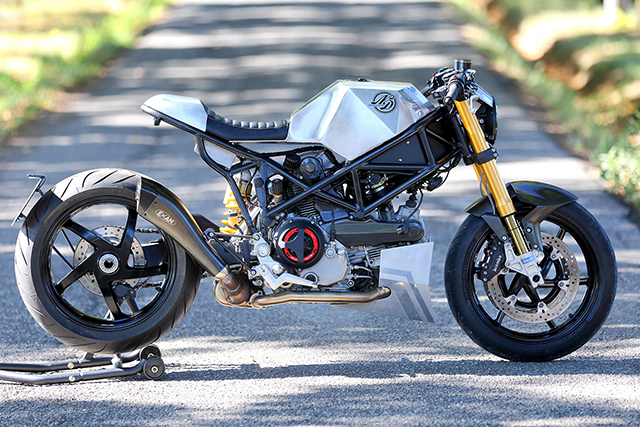 Giada and Nico have seriously unlocked the Multistrada’s potential with this one, turning a widely loathed model into cafe’d perfection. It’s a beautiful machine and a far cry from the awkward adventure model it started out as. If only all first-generation Multistrada’s could look this good. 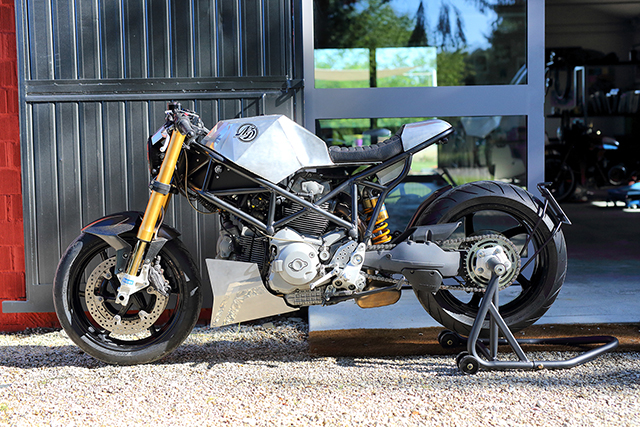 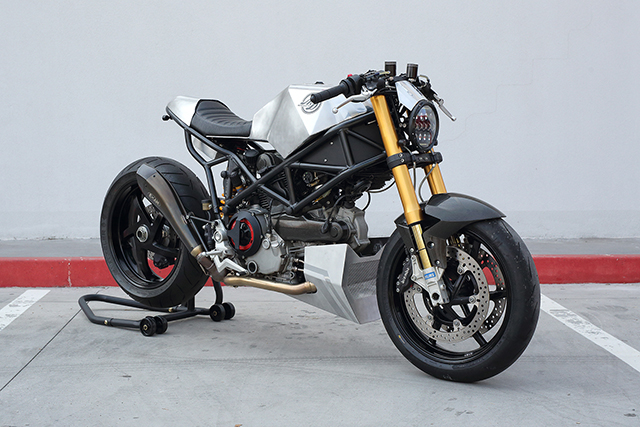 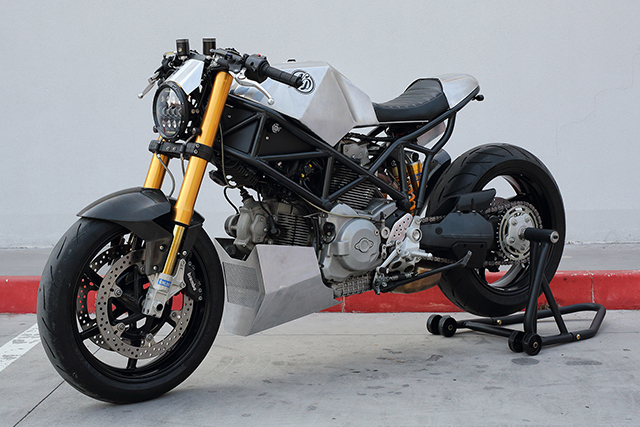 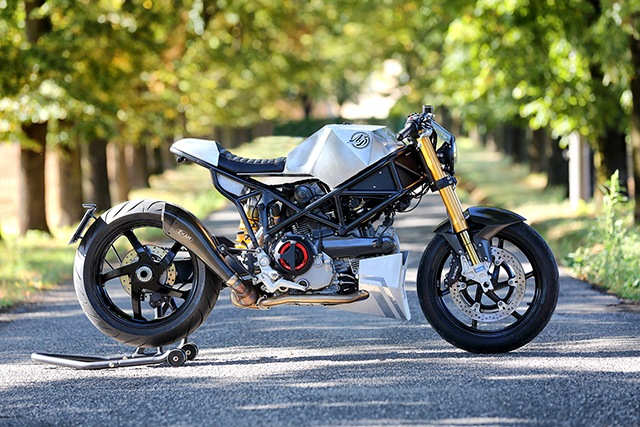