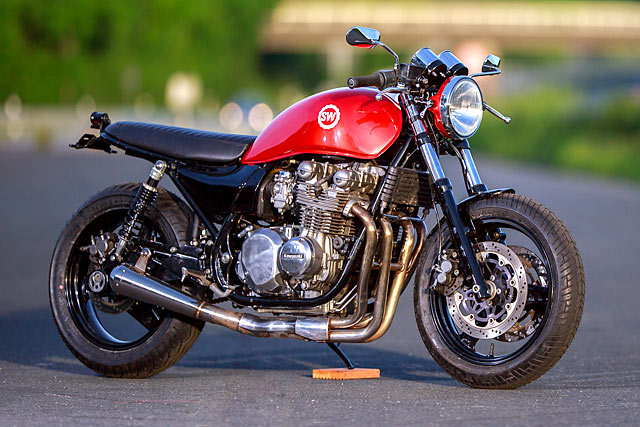 For the tiny percentage of road-going vehicles that motorcycles make up, it’s kind of cool just how many different types there are to choose from. You can take your pick of v-twins, singles, flat twos, flat fours, triples and, if classic Japanese bikes float your moto-boats, inline transverse fours. While they all have their own unique feels, between-the-knees width is the dominant vibe that these Nippon beasts impart. Like riding a racehorse or taking a tumble in the hay with a larger lover, these bikes are all about their bountiful girth. And while Tommy from Germany’s Schlachtwerk is kind of new to Japanese fours, he’s liking them more and more. Here’s his ‘Dicke Berta’ or ‘Big Bertha’ Kawasaki Zephyr 750. “The main idea for the design was shared by the customer,” says Tom. “He gave me some basic drawings, with a little room for some creativity. I call it ‘Dicke Berta’ in German. It translates to something like ‘Big Bertha’ or ‘Large Lady’, because for me it’s not typical to build these four-bangers, and I had to get my head around the wider-style engine.” “I was looking for quite some weeks to find a good donor bike. I was really trying to find one with spoked wheels, but all of those were rusty and in very bad condition. So later I decided to look for the alloy wheeled-version, which gave me the choice of more bikes with less kilometers. The donor bike I finally decided on was a ’92 with only 15,800km on the clock. I think it was quite a good choice.” “At first, I started stripping all the usual useless parts, but I definitely needed the tank, swingarm and wheels. I started the hard work by chopping the rear frame to which I then welded a loop and built a seat plate for. Next, I modified a header system off a ZR-7; this is apparently the best system for the Zephyr, as it delivers the most torque in midrange. In combination with the short muffler, I think it’s a really great exhaust set-up.” “Next I gave carburetors a complete clean and a service, which I think is a very important part of any custom bike build process. Then new YSS fork springs and rear shocks were added, along with new bearings in both the swingarm and the wheels.”

“LSL clip-ons were chosen because of their light weight and the fact that they are available in all diameters and heights. And to finish up the lighting and indicators, an LTD-style headlight in combination with LED indicators and an old style tail light were bolted on.” “Funnily, the hardest part was having to take this big, heavy four-cylinder engine out of the frame, and then put it back in without scratching the new paintwork. And as I said, it was also quite hard to build a bike which was so heavy and wide after all of my previous builds. The fuel tank is so much wider than I’m used to.” “While I am talking a lot about the engine’s width, it’s also one of my favourite parts on the finished bike. I really like the look of this classic, old Kawasaki four-pot. Also, the riding position is really nice with the clip-ons, which I didn’t expect. But the part I like the most was the smile of the customer when he saw his Schlachtwerk bike for the first time. He was grinning even wider after the very first time he rode it. I think all builders will agree with me when I say that it is a great feeling when something you’ve built by hand can make someone that happy.”