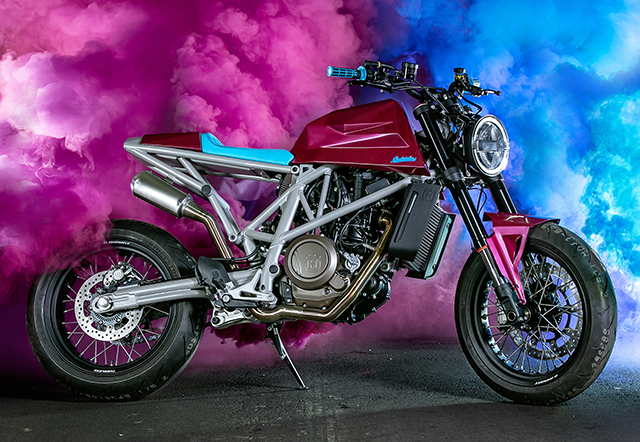 From the moment the first concept was spied at the 2014 EICMA show in Italy, the Husqvarna Vitpilen had the motorcycle world talking. It was obvious the bones of the bike were from parent company KTM’s 690, but it was the radical styling from design house Kiska causing the buzz. Despite most believing it would never come to market, when it finally hit dealer floors it retained the wild look that most concepts sadly shed. But for Outsiders Motorcycles from the Netherlands they saw the chance for an even crazier custom design and transformed this brand new 2019 Husqvarna Vitpilen 701 in just ten weeks flat. 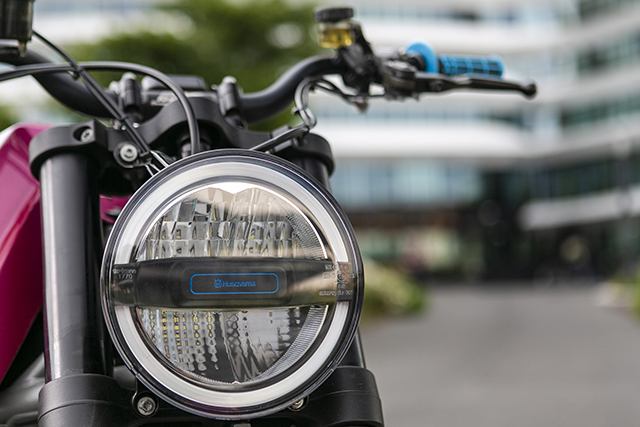 Having cut their teeth and built their name on more traditional builds utilising bikes from Honda and Triumph the Groningen based outfit of Bert Jan and Jene knew it was time to take a risk. With ideas spinning in their heads this was not only the first time they’d start with a brand new bike but would also be their first non-client build. With the cash laid down the crate arrived and Bert explains their choice to go with a Husky, “We’ve always been suckers for the old MX-bikes and the looks of them, so the brand Husqvarna was no stranger for us”. 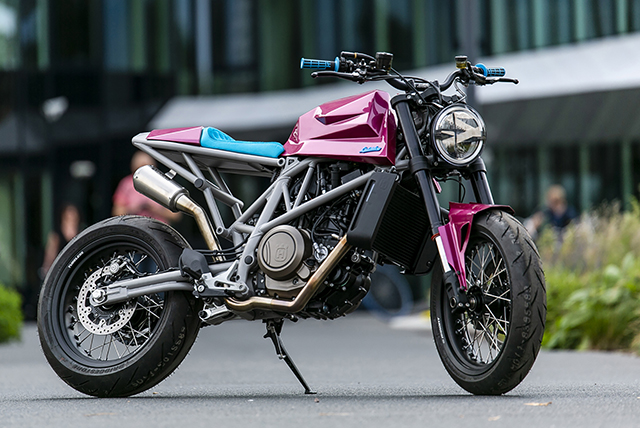 Securing a great deal from Mulders Motoren, who agreed to throw in the spoked wheels, it was out of the box and onto the lift. There is another advantage to starting with a brand new beast, “The complete budget can be spent on visuals and performance whilst on older builds half will go into making it actually run properly.” So knowing the two areas they’d focus on the lads tore into the Husky until all they had was the bare frame and engine. The blank canvas allowing them to visualise the design, but with time ticking away till the BikeShed show in London, it was full steam ahead. 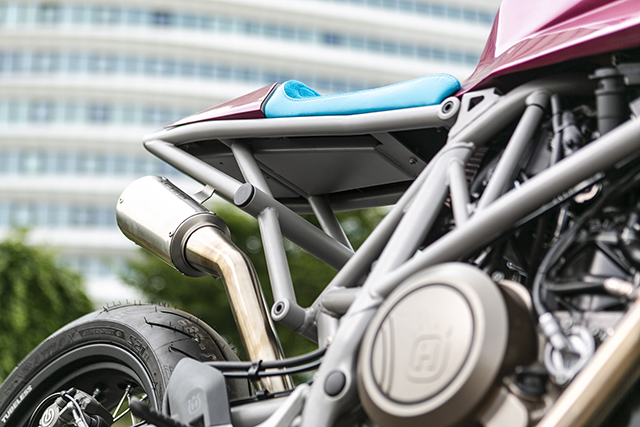 Despite such a short build time, the stock machined swingarm wasn’t to their liking and Bert felt a different design would suit the new look they were going for. So a jig was fabricated using the original as a template and a new unit welded up from twin pieces of tube to match the frame. The only dimension change was to shorten the stock length 30mm, delivering a more compact look and making wheelies even easier! The factory subframe was the next piece to go under the knife, removed with just four bolts the bulky piece was trimmed down to make another jig. 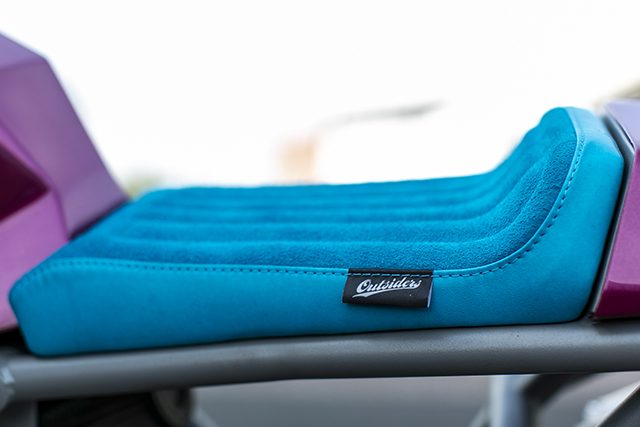 From here frame matching Chromoly was pieced together to make a short and compact design without the weight of the stock item. Finished in the same powder coat, the entire chassis takes on a stunning look, high-level customisation with a factory level of fit and finish. On top the seat base and tail cowl were hand formed from sheet metal and include quick releases for more of that off the shelf quality. With a battery mount, the starter solenoid and tuning cables now hidden neatly out of sight in a special box inside the cowl. 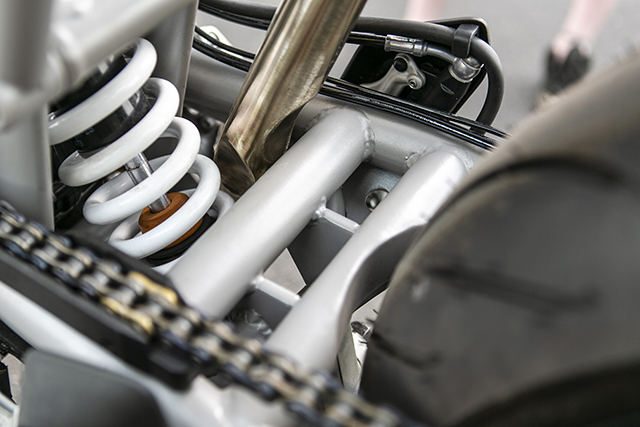 The crazy tank was next and is a personal favourite of Bert’s, “I had this idea in my head for so long and finally had the opportunity to do it. A massive undertaking it took 2 weeks to design, cut, weld and pressure test but it came out pretty good. The stock fuel pump, fuel level meter and cap were re-used.” Then the final piece of bodywork, the front fender, was made from two separate sheets of metal that are welded together down the middle having first been shaped out of cardboard. Laying on the paint brings the tins to life with gloss magenta and bubble gum blue impossible to miss. 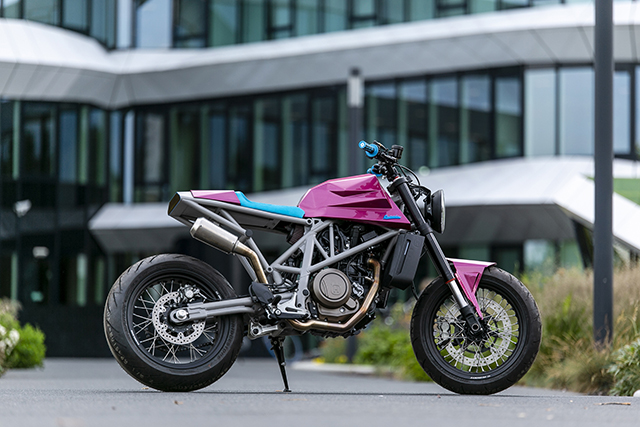 With time now a limiting factor the re-badged KTM 690cc engine has been treated to just a select few choice upgrades. The stunning exhaust is made from individual pieces of 42mm 316 stainless tube running tight to the motor and frame before barking out of a GP style Spark muffler. The huge factory airbox is long gone and replaced with a pod filter that has the air sensor cleverly inserted inside to keep the ECU happy. Colour matching grips join a regular throttle on the bars with the bulky fly-by-wire mechanism relocated under the tank. 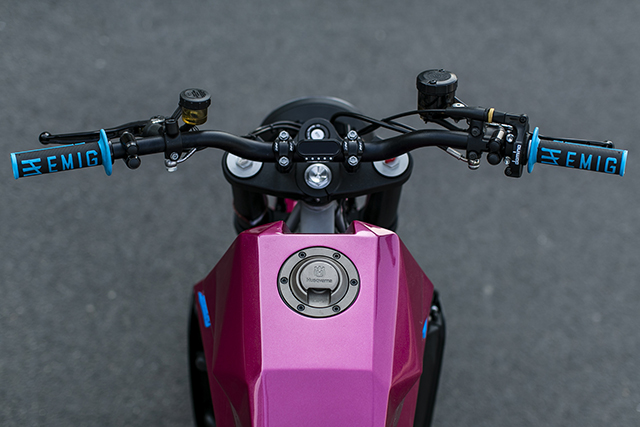 Keen-eyed readers will notice the integrated clip-ons are gone, replaced with handlebars and risers from Neken and a custom top clamp milled by Scheffers Engineering in Norway. With that the Outsiders had to load up the Vit and head for London arriving just in time for the show. But the bike almost didn’t stay owner less for long, with the guys meeting the head of Toronto’s Big Trouble Pizza on the first day, “His logo has the exact same colours as the bike, he already has a 401 and wanted a 701. He happened to have the stickers with him at the show so I slapped one on and shook hands, like SOLD!” Bert smiles. Unfortunately the sale didn’t go through and is still for sale for the right wild child wanting a motorcycle that will always stand out from the crowd. 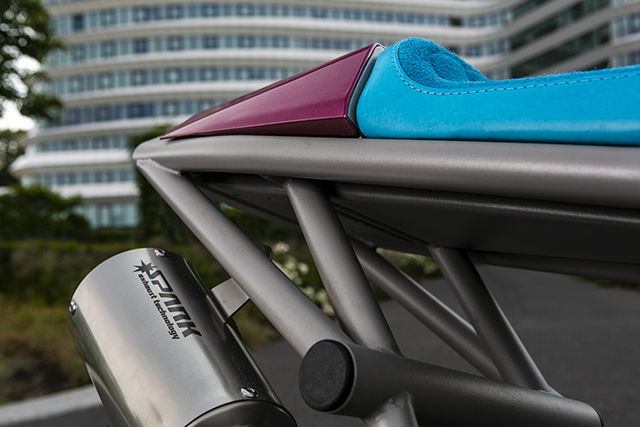 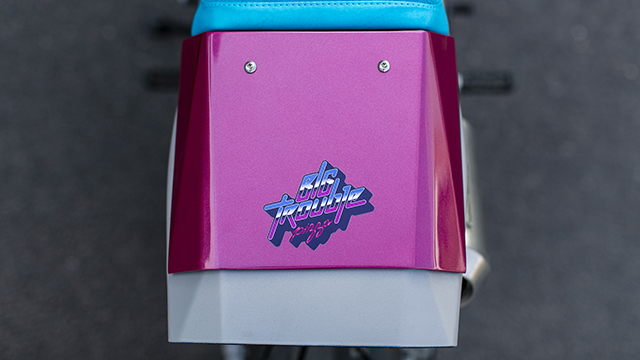