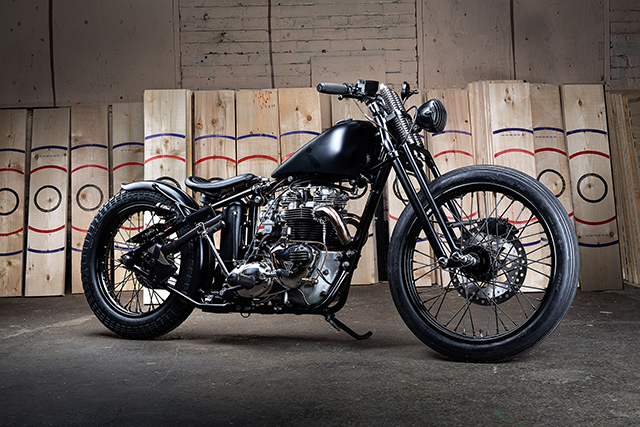 So it’s pressure you’re after; how does building a custom bike for the founder of the Backyard Axe Throwing League sound? Oh, and he also owns the incredible Dyna Guerilla by Rough Crafts that the new machine must be able to match and complement. For Rob Chappell of Origin8or Custom Cycle Co it was barely pause for concern. Because from the earliest of ages he’s been drawing up designs and then spinning spanners. So it comes as no surprise that the 1970 Triumph Bonneville they call ‘BATL’ had everyone smiling when it finally rolled out of his Ontario, Canada based workshop. “Matt Wilson is the owner and founder of the Backyard Axe Throwing League (BATL) which now has leagues and locations across North America, so my discussion with him quickly turned to making a bike he could use to help promote the business,” Rob explains. But neither had any interest in creating some gaudy theme bike, like those vomited onto our TV screens a few years ago. Instead, Matt’s request was pretty simple, “I just need it to be reliable… and black”. 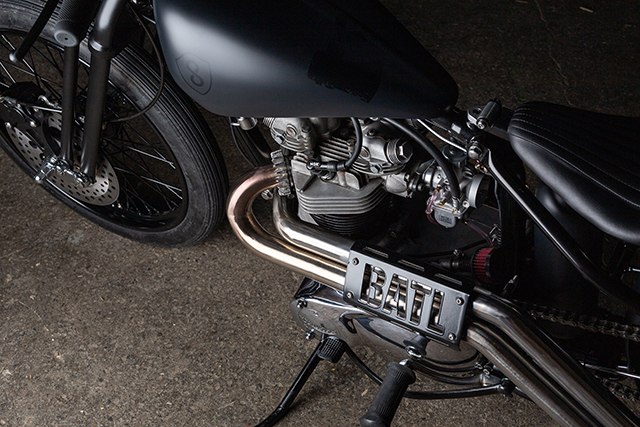 Sounds easy right? Well not so fast; while Matt did already own the Triumph to use as the donor, it had been to half the shops in Toronto and still never ran right. Before finally being parked up and left to gather dust in a corner. Sometimes starting with a bike with such gremlins is more hassle than its worth, but Rob’s built enough bikes to have confidence in his craft. First he stripped down the Bonneville and quickly found the wiring loom was a bird’s nest of patch-up jobs. 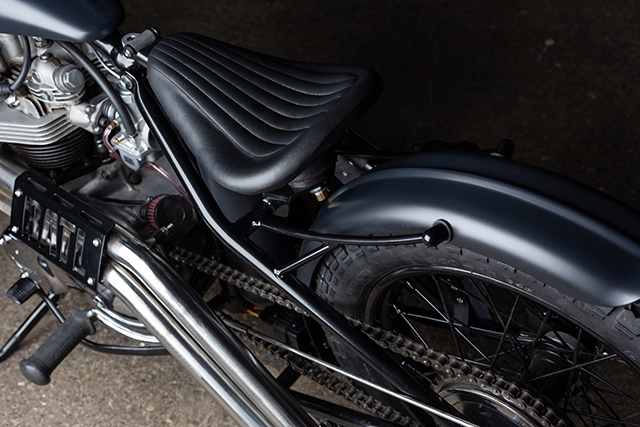 With that thrown in the bin, he pulled the entire bike apart, including removing the old hardtail, until all he was left with was just the front frame. From here Rob had a blank canvas and quickly found a David Bird hardtail in the local classifieds and a vertical oil tank to match. 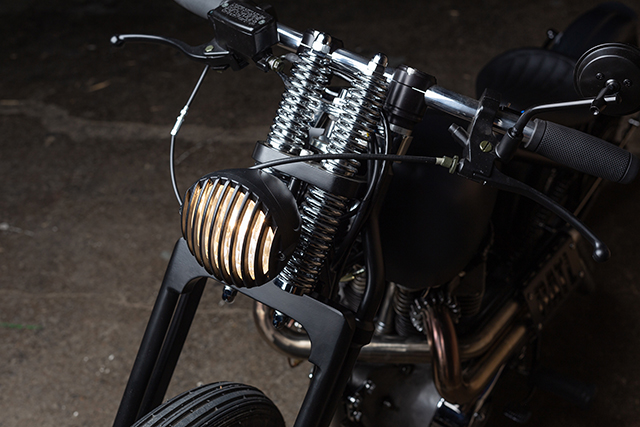 Now to turn it into a roller a TCBros springer front end was selected and spinning on the axle is a 21in rim wrapped in a DURO HF301. While at the rear the 16 incher was pulled out and replaced with a new 18in rim wearing a DURO HF308. 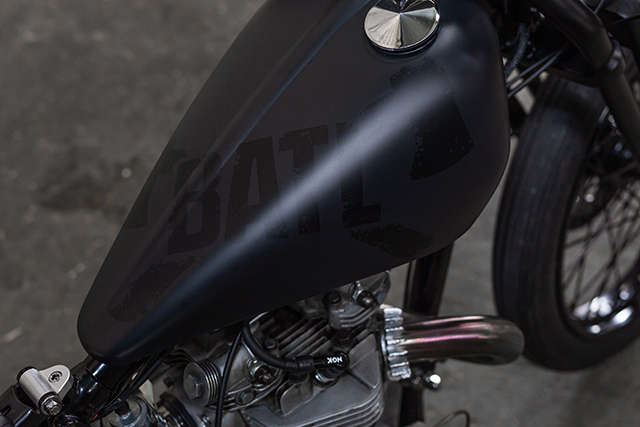 Turning his attention to the visuals Rob took one look at the rusted out stock tank and decided to look elsewhere. From Lowbrow Customs he acquired a Cole Foster tank that changes the look of the bike just enough without looking at all out of place. Behind it he’s mounted a classic Biltwell seat that is supported by an airbag from TCBros to give a cushioned ride on the rigid machine. “Matt likes classic bobbers but I am not a huge fan of the sissy bar style, so I followed the lines of the seat and the flow of the tank down the backbone to create the rear fender mounts.” 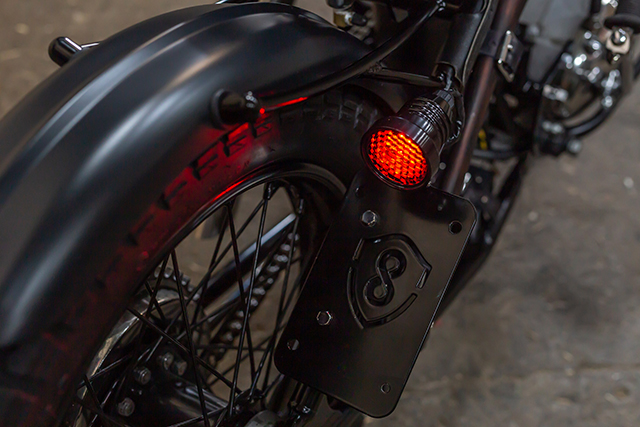 This gives the new fender a weightless, almost suspended in mid-air look that is crisp and clean. While still providing the necessary strength and rigidity to prevent the fender from flapping around. Next Rob moved to some of the detail work “I created the license plate and tail light mount on my CNC plasma to fit the sweet little LED tail light,” he tells us. With the front end being treated to a smaller than stock headlight with the grilled out look, that is perfect for an owner who slings Axes on the weekend. 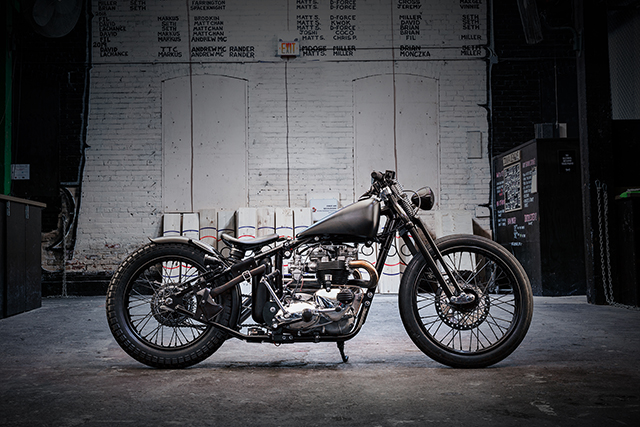 Then Rob had an idea, “Without getting too ‘Theme bike’ on this build I did decide it would be cool for Matt to mount his axe to the bike so he can travel to his events prepared. The amazing leatherwork on the axe holder and the battery mount are by my friend Adrian from 8×6 Customwork.” Now the loom could be totally re-done with a tiny Antigravity 8-cell battery, new micro-switches and Pazon ignition keeping the look super clean with plenty of hidden wiring. 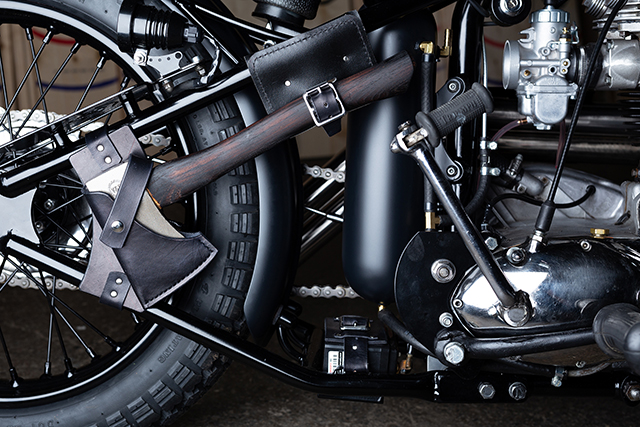 Twist the throttle on the handmade drags bars and the parallel twin comes to life with a hell of a bark. The custom stainless exhaust was fab’d up in-house and comes up looking a treat thanks to the polishing work of @SuperLiza. To keep Matt from burning his leg Rob made up a trick heat shield, before fitting the engine with Mikuni carburation for reliability. 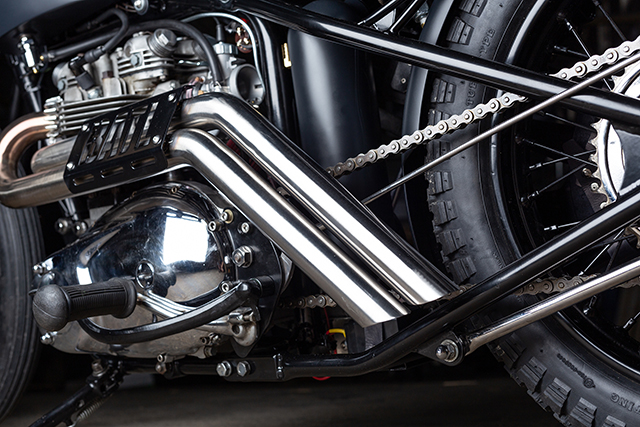 Some final back and forth and Mat Tobin at Jensen’s Customs was called upon to lay down the matte deep grey paint with graphics. And Origin8or Custom Cycle was ready to pass the axe over to Matt, who now rides the perfect steed into BATL. 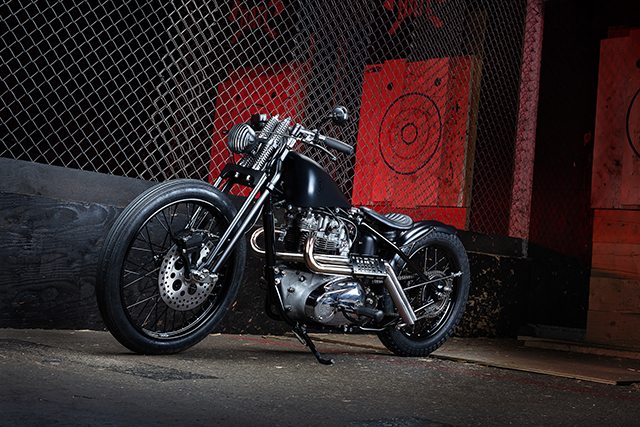