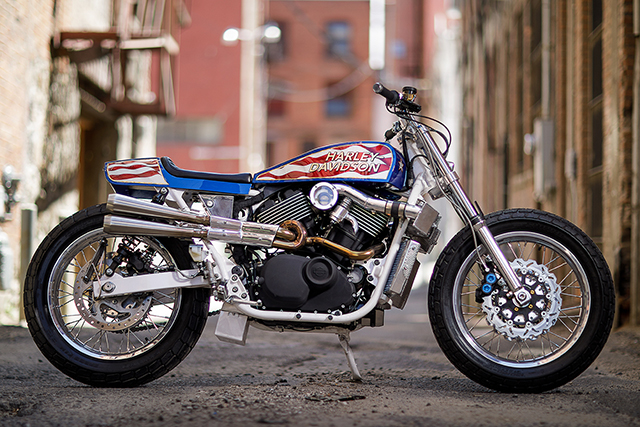 As the dust settles on 4th of July celebrations in America, we thought this Evel Knievel tribute Harley-Davidson Street 750 by Number 8 Wire Motorcycles would be the perfect hangover cure. Almost a year ago to the day, thousands watched around the world as Travis Pastrana jumped over the water fountains at Caesars Palace in Las Vegas as a tribute to Evel Kneivel – Evel unfortunately never landed it and the jump almost killed him. Unlike Evel, Travis nailed the jump and made it look easy on his Indian Scout FTR750.

There were a few Harley-Davidson loyalists that were shocked at the jump, not because of the death defying distance involved, but because Travis was doing it on an Indian – not a Harley XR750 he was famous for riding. One of those HD enthusiasts contacted Colin at Number 8 Wire and commissioned him to build a Evel Kneivel inspired Harley using the Street 750. “My brief was to design and build an Evel tribute bike with the underlying directive of What Would Evel Do?” 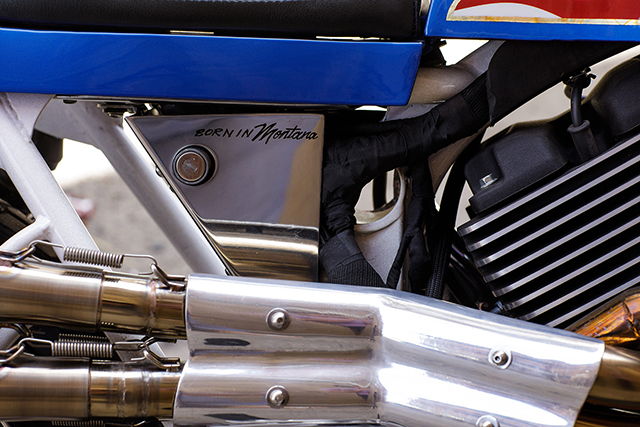 With that in mind, Colin decided to do what Evel would do: try something that hasn’t been done before. So he decided to put a supercharger in it. “The supercharger is a Procharger A1-R, typically used on bigger Harleys as part of a kit,” says Colin. “Given that no kits are available and it has never been done before, I designed and machined a couple different prototypes for my power output system before settling on the final design.” 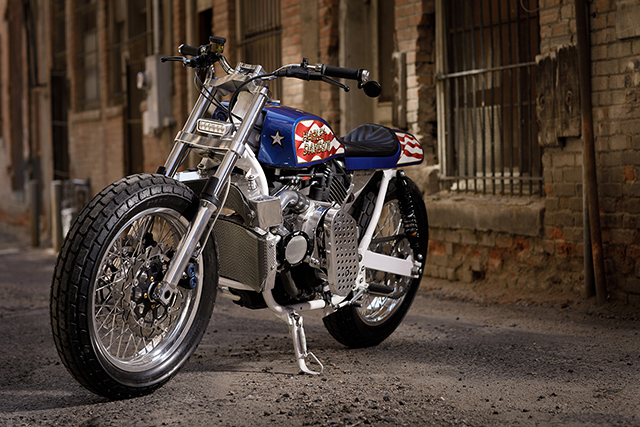 Creating a supercharger for the Street 750 turned out to be a bigger job than Colin originally thought. All the parts for the power output and blower were designed and hand machined by Colin in his shop. “The intake for the blower I made out of aluminum pie cuts – it was a tight fit – and for street use it gets a K&N filter bag over the intake screen.” 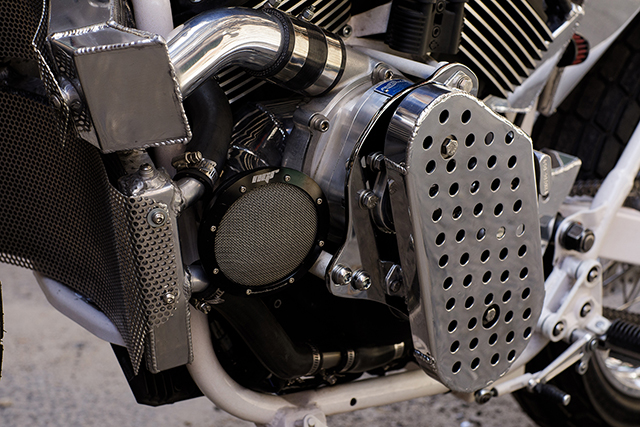 Up the front, the stock radiator was swapped out for a Ducati Monster one. As for the headlight, Evel never had to use one, so Colin wanted to keep it as discreet as possible. He opted for a Rigid Industries high/low LED unit which he then polished and mounted within the triples. 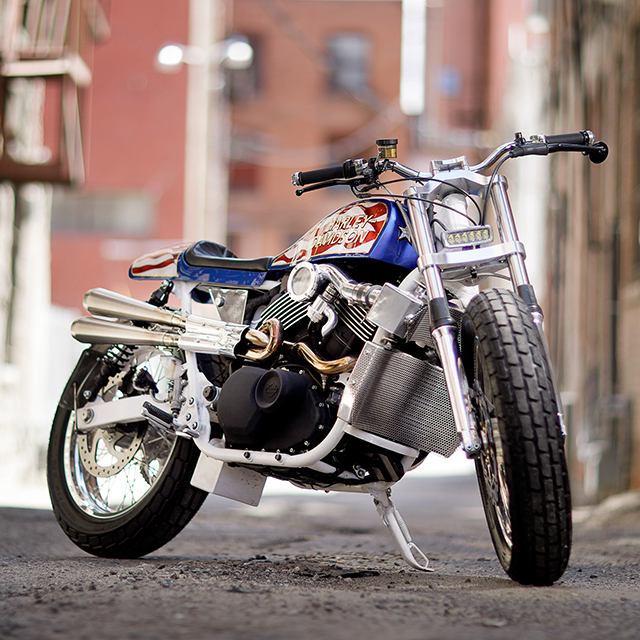 At the rear, the subframe was removed and a new one was made fresh with DOM tubing. Underneath is an aluminum box which is half electronics box and half coolant overflow tank. There’s also a catch can for the breathers which drains back into the case via a one-off dipstick replacement. To keep the supercharger belt safe, Colin made the belt guard to match the chain guard – all out of aluminum. 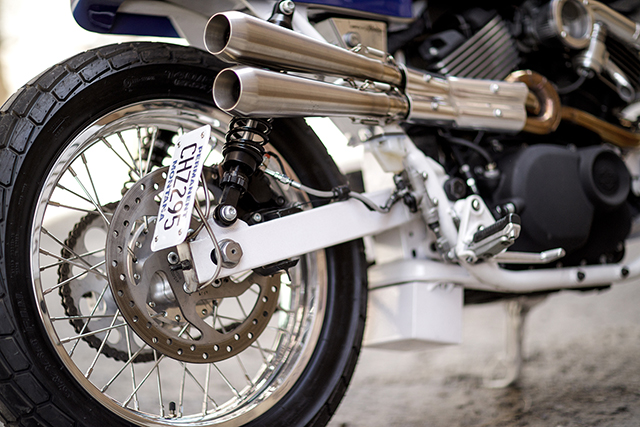 Classic high pipes like the XR750’s were mandatory. “The pipes were probably the most fun of the build for me – although the heat shield took forever to make, cone engineering mufflers finish off the straight-through stainless system.” 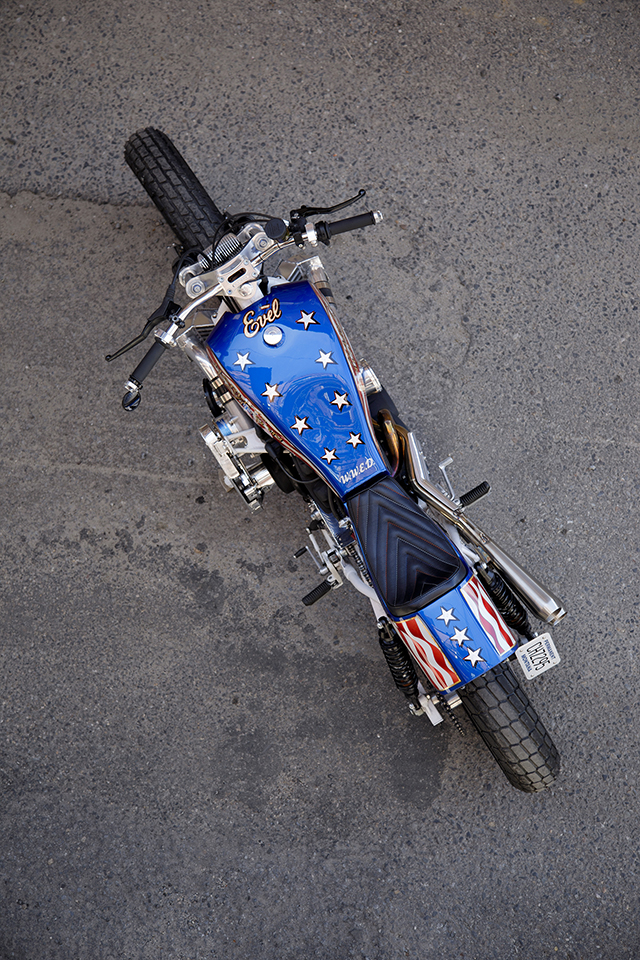 Under the seat is an M-unit blue, paired with Motogadget turn signals, speedometer and buttons up front. “Ginger McCabe from New Church Moto created the perfect seat – inspired by the design on Evel’s jump suit. Tillo Graphics handled the paint work and PCS Missoula perfected the metallic powder coat.” 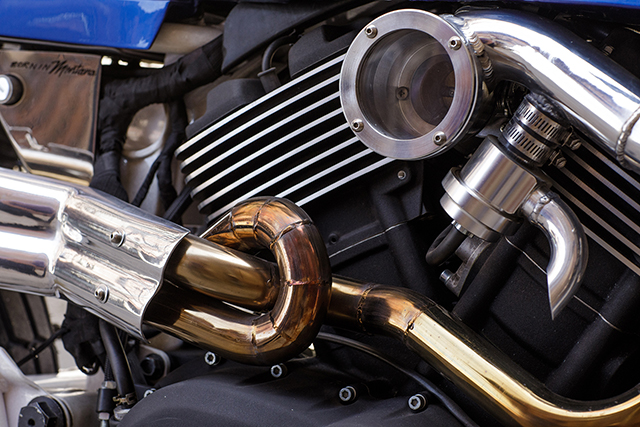 The main aesthetic influence for the bodywork was the XR750. Colin custom made the aluminium XR styled tank and seat cowl and flush-mounted the LED tail lights and turn signals in the seat cowl. There’s also W.W.E.D. on the tank as a reminder when you are riding: What Would Evel Do? – which could be dangerous to ask yourself in traffic. 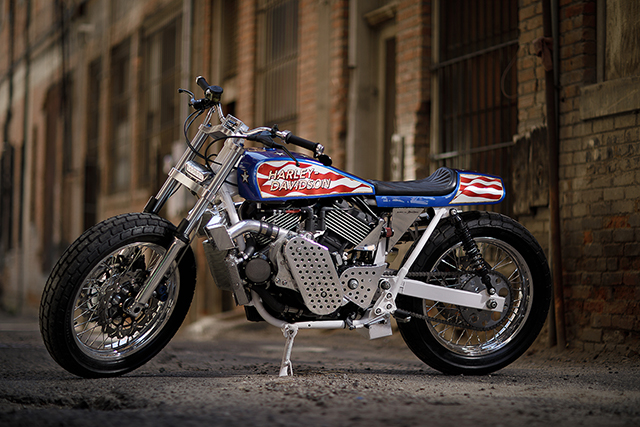 “Cognito Moto came through with hubs and triples to work with the R6 forks and 19” Sun rims. Given the flat track heritage, we wrapped them in some DOT legal flat track tires. The rear end is sprung with Racetech G3 shocks.” 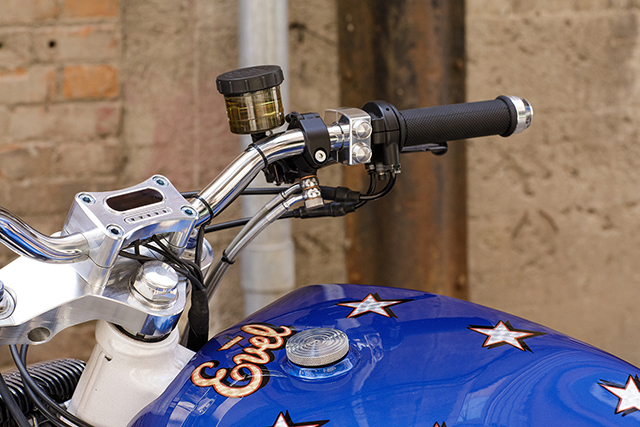 The bike attended the Handbuilt Show in Austin and The One Moto Show where it won the ‘Best Racehorse’ award. And with that serious supercharger pumping out the ponies, we can just see Evel looking down on us in his patriotic jumpsuit, wanting to have another crack at that Caesars Palace jump. 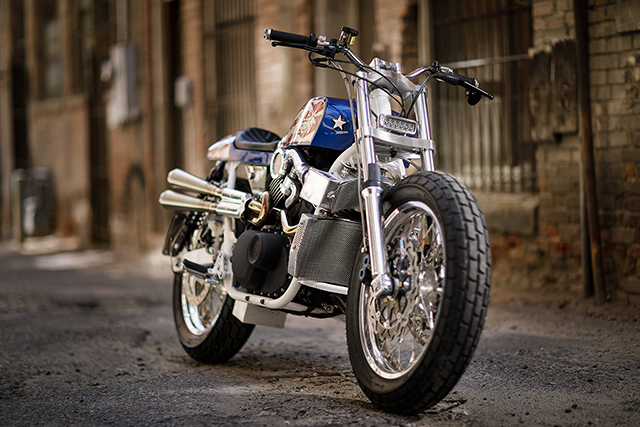 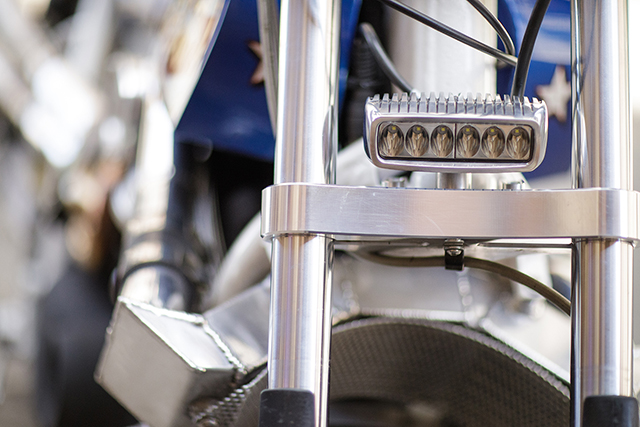 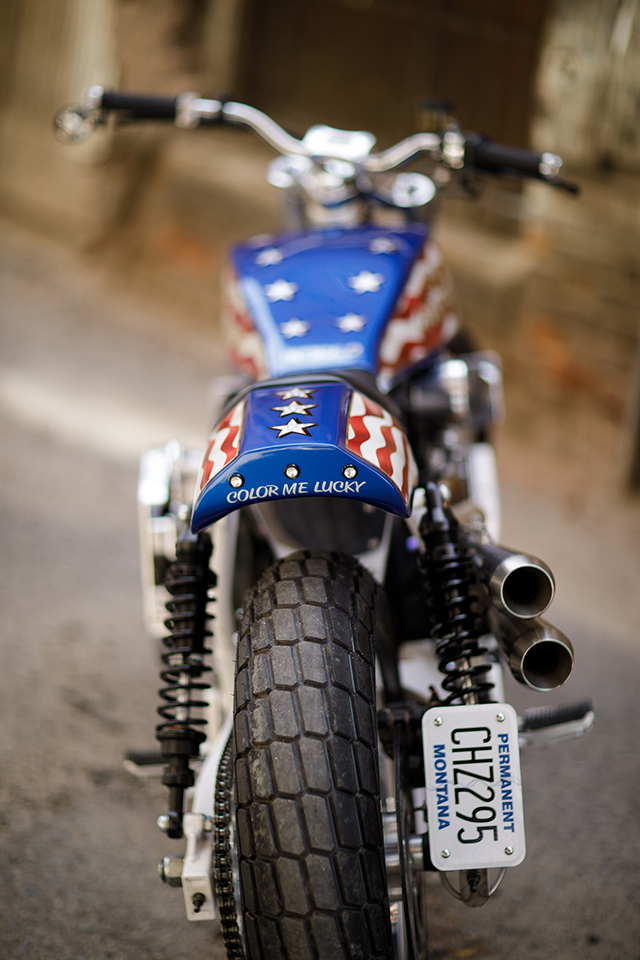 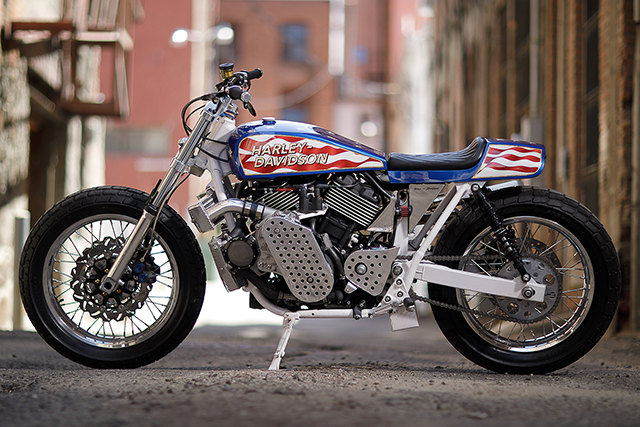