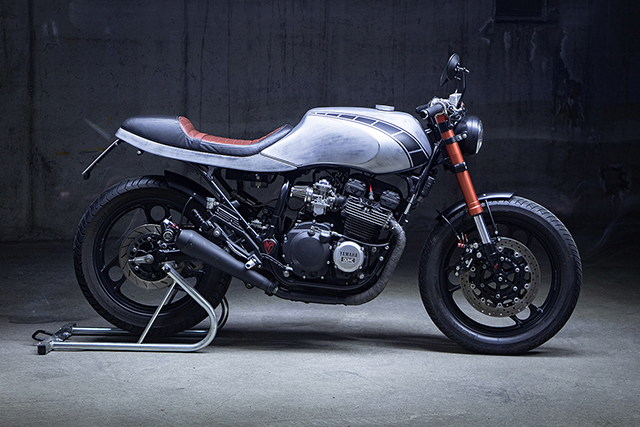 When you embark on the journey of building a custom motorcycle half the battle can be in simply picking the base you choose. Like a good pizza it sets the foundation and with the availability of all the right ingredients, it can be almost impossible to go wrong. But choosing to start with an ’80s sportbike immediately sets the builder a challenge; they’re usually ugly, rarely modified by others and almost always in terrible condition. Totally undaunted Markus Klett of Motopola chose a 1985 Yamaha XJ600 and custom-crafted all the right toppings for this tasty treat. 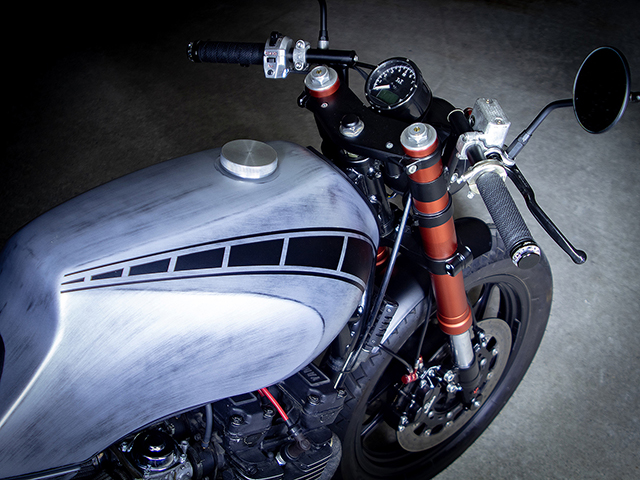 With its dated looks that certainly haven’t aged like a fine wine, saggy suspension that’s all too soft and fixtures from the Yamaha parts bin to make the price an entry level bit of kit, the XJ600 won’t be featured in any coffee table books on the best bikes of the 20th century. But for a number of reasons it remains an important part of motorcycle history. The first Japanese 600cc inline four-cylinder engine would become the blueprint on which all Supersport racing has been based for more than 30 years and the adjustable Mono-shock rear brought Yamaha into the modern era.

But the example that Markus hoisted onto his workshop lift in the beautiful city of Rosenheim, Germany, was simply stuffed. Tuning bikes since the age of 16, Markus has gone from hotting up Vespas to full one-off customs as his career has evolved over the past 20 years. Now with his good friend and helicopter pilot wanting a weaponised XJ, he’d have to draw on all he’s learned to pull it off. The first task was to simply strip the bike down, pull the half fairings off and cut out the mess of a birds nest that once presumably functioned as a wiring loom. 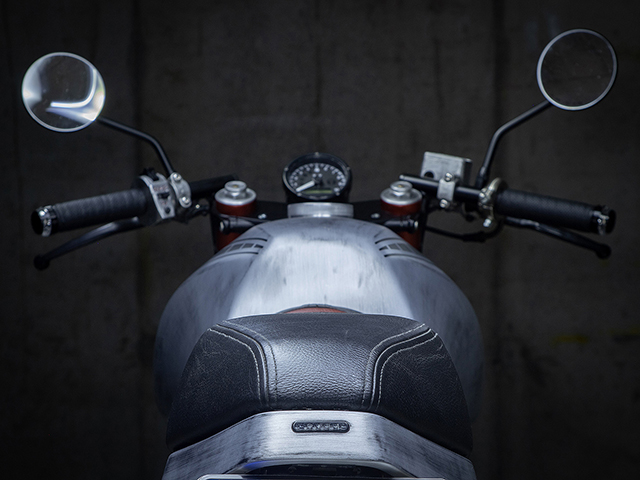 First up the bare frame was smoothed out, the tabs for the bodywork cut off and some one-off plug covers made to give things a uniform look. With a section of the rear subframe removed and the grinder also attacking the seat mount, it was then ready for powder coat. Now with just the wheels on the stock tank was stripped of all its paint and thrown up on the backbone so Markus could start to visualise a design. Wanting to go for a monocoque style one-piece body, new seat supports were fabricated to bring things up 50mm to align with the tank. 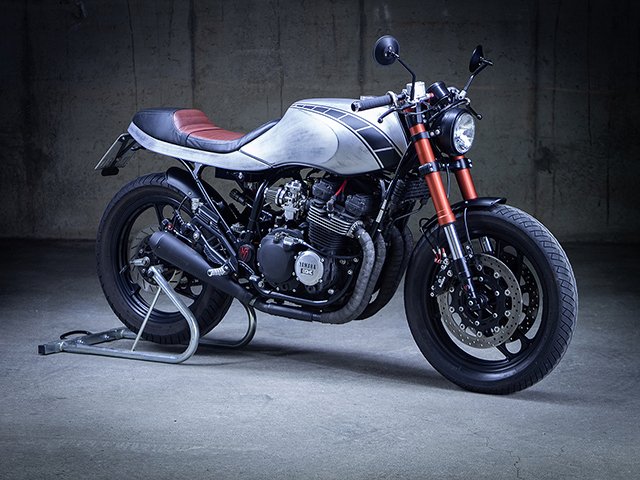 Starting with a large piece of foam placed over the entire rear section of the bike, the process of cutting, shaping and sanding began to form a buck from which the fibreglass could be shaped. Matching the lines of the tank while creating a more appealing aesthetic was no easy task, but even more impressive is the way Markus has managed to convince the eye the rear fibreglass and metal tank are made of the same material. A mix of hand sanded silver and black paint gets the look spot on, with Yamaha’s famous Speedblocks in black laid down for extra effect. 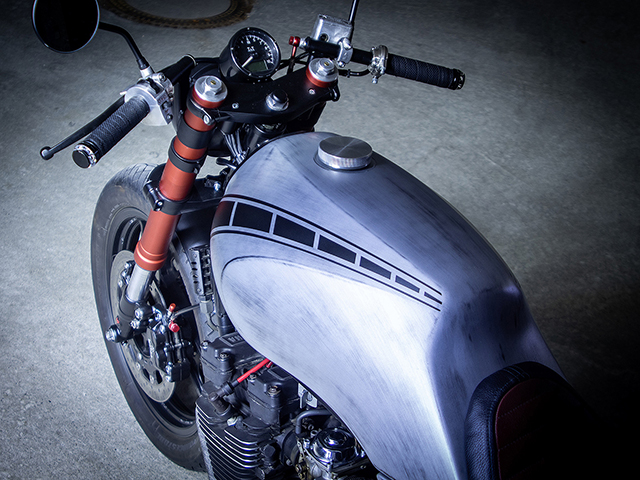 The seat too was shaped in house, with the client wanting the hump look and still be registered as a two person machine; it’s all made from foam before being stitched in contrasting colours to provide the form and function. Now he had the XJ looking the goods it was time to start working on its other flaws and the front end now sports a set of SZR660 red anodized USD forks that have been rebuilt with progressive springs. While out back a big dollar Bitubo shock designed for a new GSXR is re-valved to suit. Both ends get their own hand made fenders while stopping power is now greatly enhanced thanks to Brembo calipers grabbing 320mm drilled rotors. 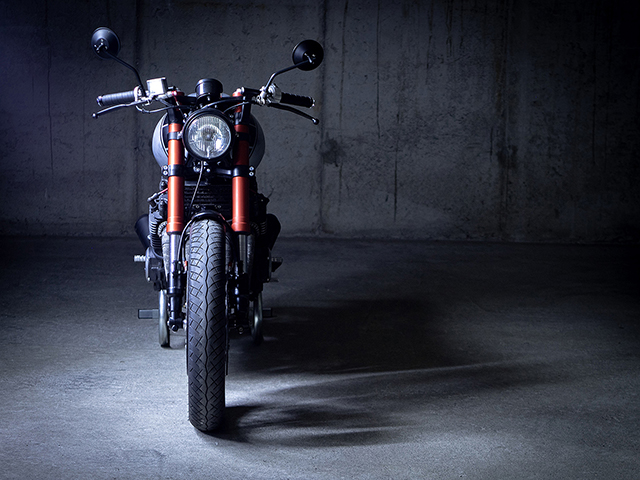 The original Supersport 600 engine was trash and couldn’t go back into the frame until it had been treated to a thorough freshening up. The Mikuni carbs are held on with a new set of boots and have been re-jetted with a stage 3 kit from Dynojet. While the factory exhaust has been repaired, wrapped and then shortened before finishing out in a set of black reverse cone mufflers. To properly spark the motor as it reaches the 10,000 rpm redline meant an all new electrical setup, neatly hidden under the seat in a custom tray, with every last wire in the bike replaced and rerouted. 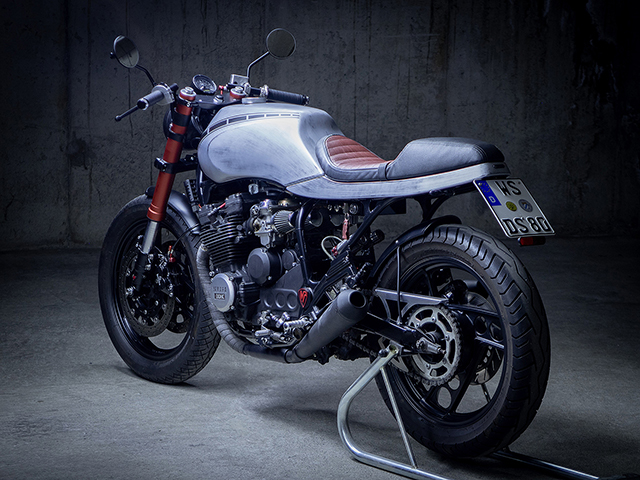 To make the bike a comfortable and yet sporty place to be, a set of Ducati SS clip-ons were chosen and team up with pegs that were machined in the workshop. Lighting is kept to a bare minimum, a small headlight tucked hard against the trees is joined by LEDs from Motogadget and Kellermann. With the final touch coming in the form of hand stitched grips in seat matching leather to complete the build. The once ugly duckling has now not only been thoroughly transformed visually but given the equipment to make it a blast on the streets. And with the tag line of Motopola being “Ugly Born Motorcycles”, this won’t be the last child of the ’80s that Markus brings blasting back into the 21st century. 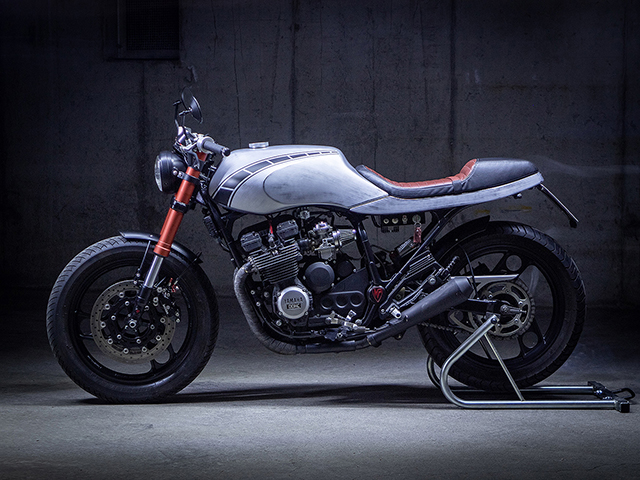