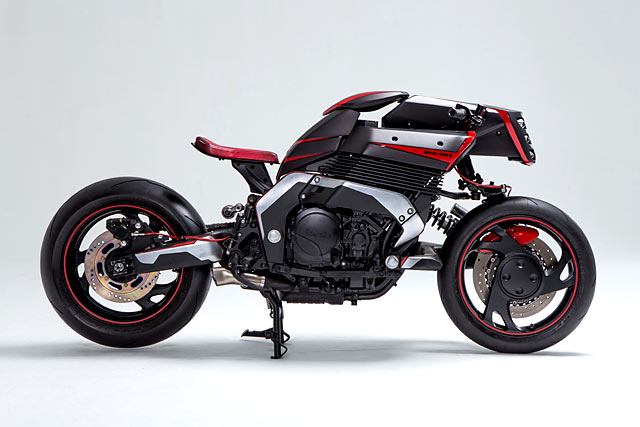 In a time when there has never been so many different models of new motorcycles to choose from there is also a feeling that many, despite the manufacturer, are really just the same. But every so often in the history of the industry there is a short burst where the rules are thrown aside and in the early ’90s one such bike caught an enthusiastic eye. Now with the money to own that very bike, he’s turned to Samuel Kao of JSK Moto and with his most vivid of imaginations describe the brief; a back to the future vision of where convention is considered ill-informed. As if straight from the set of Alien v Predator, Project Rhodium Omega is a 1993 Yamaha GTS 1000 racer that makes the truly unique original seem downright bland. It’s easy to see what captivated businessman James Chen at the time when the GTS was first released; it’s not everyday a bike rolls by with a forkless front end. The unusual design and frame to support it by RADD’s James Parker wasn’t everyone’s cup of tea however and sales only lasted a few years in the USA. But for James it was more about endless possibilities and that’s what drove this custom build “I wished to give this motorcycle a re-appearance in line with the 21st century so a new generation of young people can open their imagination the same way it did to me when introduced in 1993”.

Always up for the challenge Samuel was confident his JSK Moto outfit could bring those ideas to life and the hours of design sketches commenced. “Working with the lines of the motorcycle it was decided that the overall design of Project Rhodium Omega is pentagonal. No matter the seat, air intake, or different viewing angles, each panel has influence from the pentagon,” explains Kao. Although he’s quick to point out it was no easy feat, “This was the most time, sweat, and frustration in our building history.” At over 600lbs the stocker is a hefty thing so weight saving was a priority and the bike was stripped down to just the bare bones to get things underway. But with such an unconventional base to be working with what was actually possible was impossible to know. So Samuel began by creating the shape of the bodywork using wire to create a skeleton that would allow all clearances to be checked. Under the cage where the fuel tank once sat a new fuel core has been fabricated to reduce weight and position it lower on the frame. It was also clear that the stock radiator wouldn’t fit, so a new one was built that relies on depth over width to achieve the same capacity.

[superquote]“That budget soon took a hit when the resulting mould that had cost $8000 to make was damaged during shipping.”[/superquote]

Then for the new racing body to be able to bolt to the frame a mounting plate had to be fabricated before the panels themselves could be designed. And just like creatives from a time largely past that meant literally getting their hands dirty. “Because we used clay to shape the body panels, holes were drilled on the plate so the clay can stick. This was a very labour intensive process but necessary to make this motorcycle functional yet try to stay within the budget,” Samuel explains. Although that budget soon took a hit when the resulting mould that had cost $8000 to make was damaged during shipping. But never one to give up JSK drafted in One Hand Made Metal Fabrication who used renderings by Edison Liao to create the parts from metal and fibreglass. In addition to the exquisite body panels that create the alien like look, there is an enormous amount of venting incorporated into the build. The intake vents for example and their covers join directly to a custom intake that has air rammed down the engines throat, while other vents have both form and function extracting heat from the now encased engine. The seat base was crafted at Black Smith CNC and creates a floating look for the hand dyed leather saddle by Kingsman Seat’s. With the Yamaha stripped down again, the panels, vents and many of the other major components were sent out to Air Runner Kustom Paint who used a mix of matte hues and red to capture the distinctive lines. While proving many hands make light work quite literally the front LED headlights were crucial to the design brief, acting as eyes gazing fiercely down the road. The circuit to operate the arrangement was done by A-Wen which freed up Samuel to turn to other tasks. Most importantly the suspension, with a 3D designed piece proving too costly to produce Gears Racing made custom shocks to work with a modified front end to finally lower the GTS while still retaining that wild single sided front end look. So what powers this remarkable machine? Yamaha fitted the GTS with a reworked version of the FZR 1000cc four-cylinder engine and with 5 valve heads it has more power than you might expect. On the exhaust side of the equation the heat proofed headers get the gases away without a fuss but the soundtrack isn’t left to chance with a brushed muffler from Akrapovic. But if the basic mechanical fundamentals were sound, the early ’90s electronics were proof positive the automotive world was yet to hit its digital straps. Looking at the build pictures you wonder how Samuel maintained his sanity, but methodically he created an all new wiring loom one piece at a time. With the ECU a near brick, the ABS controller has been dumped to simplify things, and a tiny RCE battery packs all the punch of the original at a fraction of its size. To bring everything into the 21st century a stunning AiM digital racing dash is like something from NASA and brushed illuminated buttons replace the switch gear. New bars jut out from behind the beasts head, with big dollar Beringer brake and hydraulic clutch master cylinders that feed red braid lines the only necessary additions. All told it took 30 months for JSK Moto and their friends to bring James Chen’s childhood dreams into reality. So what’s in the name, the essence of the entire build! “The word Rhodium is the name of a metallic element that is rare, highly resistant to corrosion, and extremely reflective. We chose this element to express the feeling of this ultra-futuristic design. The word Omega is actually the name Yamaha gave to the frame of the motorcycle which resembles the omega symbol at profile view.” And just when things were getting a little beige and bland this team effort is set to get tongues wagging and minds wondering, what if…