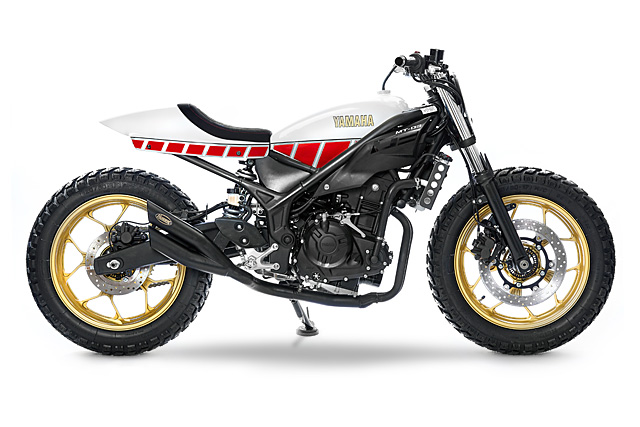 Headed by racer and motorcycle builder Dirk Oehlerking, Kingston Customs is a small workshop running out of Hanover, Germany. For this build, Dirk decided to take on two surprisingly young starters – a new Yamaha MT-03 and a 12-year-old by the name of Moritz Bree. Moritz is a bit of a Wunderkind of the custom scene. He’s helped work on a few projects before, but this seems to be the first time that he’s delved into the world of fabrication. Moritz penned the lines of the bike himself and armed with a grinder and a twee pair of matching denim overalls, they both went to work. Moritz wasn’t just there as a subversion of union labour laws or part of a young offenders program. He’s previously designed a bombastic Triumph Scrambler for aftermarket parts supplier Free Spirits and niche manufacturer Zaeta. In his own time he races and also builds mock-ups of bikes he’s designed in 1:18 scale.

[superquote]“Moritz wasn’t just there as a subversion of union labour laws or part of a young offenders program.”[/superquote] On this tracker build Moritz actually did a lot of the work on the Yamaha himself under the watchful eyes of Dirk. The first thing to go was the rear subframe, which was cut back and a new assembly made to take a modified Storz tracker seat. The fibreglass pan was cut and shut to narrow its lines and sit neatly above the new frame. The fuel tank is bespoke, made from alloy to sit lower than the modern humped back unit. Surprisingly, it actually works with the twin cradle frame. The bike breathes through a Hurric Pro exhaust and a K&N air filter and aside from that the engine is left stock. The stripped-back tracker look is helped by Motogadget indicators and a Motoscope mini keeping the whole bike looking nice and light. LED indicators allow the bike to be considered road legal – even if it’ll be a few years before Moritz can ride it on the autobahn. At the moment he’ll have to be content riding it into the Intermot bike show where it was first revealed. It’s tough work being young. Looking back on the build Dirk says it went smoothly without too many issues. ‘There are always difficult technical moments but on the MT-03 there was no real problem for us. On the contrary – it was incredible fun.’ It sounds like the first time a kid has hung around a workshop and not learnt a whole bunch of new swear words. Part of the reason is the surprising starting point for the custom has actually worked out really well – those chunky Heidenau K60 tyres sit on stock rims – and when finished in gold they have a passing resemblance to the famous Marchesini tracker rims. Surprisingly the bike even runs OEM bars. Both Dirk and Moritz are thrilled with the outcome. ‘The line and the proportions are just as we intended and they’re perfect.’ He’s not wrong. The pair have turned a pretty vanilla modern naked bike into a neat little tracker custom. Remember the name Moritz Bree. I think we’ll be seeing it quite a bit in the years to come.