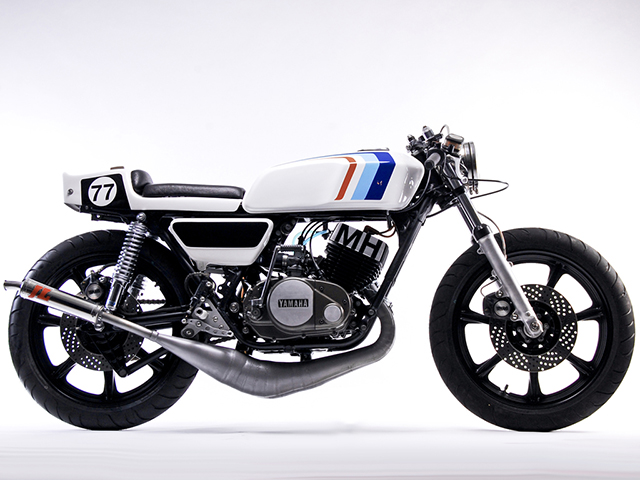 As the 2-stroke era of road bikes began to come to an end as the 1970’s excess collided with the red tape of the 80’s, most manufacturers let the smoke filled air slowly disappear. Honda had long since had the CB range, the triples of Kawasaki and GT Suzuki’s it had been confirmed would be no more. But Yamaha wanted one final shot at refining its wild RD range and the 400 model would be the perfect salute to reed valve filled delirium. So when decades on, the owner of this ride saw what MotoHangar of Virginia had created with their “Best in Show” 2-stroke, The Honduki, he knew exactly where to turn. The RD400 falls under MotoHangar’s “Moto2” package of build and customisation and includes a full frame off restoration. Stripping the bike back to a bare frame allows a builder to ensure no stone is left unturned in the pursuit of Automotive Nirvana. With the frame bare it is shaved of everything it doesn’t need and readied to accept the new components. Despite its handling prowess the RD400 factory shocks are known to fade quickly so a set of NOS Assault rear shocks are fitted to keep the rear tire planted. Famed for its ability to take a corner in go kart like fashion the front suspension is lowered 1inch and adjusted to match the rear without upsetting the natural balance. The superb handling of the RD is only surpassed by the grin inducing thrust and scream of the 2-stroke twin. The now rebuilt, detailed and painted engine restores the look and performance of the engine to its tacho needle snapping best.  But while Yamaha had built a true 2 pot screamer they undid all their good work with a huge air box and sound sapping exhaust. MotoHangar took care of the problem fitting K&N air filters to the induction side and those stunning JL expansion chambers give the RD the bark to match its bite! No frame off resto project would be complete without taking care of the way the bike looks and the MotoHangar crew set off the racer look perfectly. The body work meets the customer’s criteria of Le Mans style vintage racer, with the coloured race stipes and classic race number. While the custom flush mounted LED tail light, LED lights mounted in triple trees and fog light style H4 powered headlight giving a one off look. Showing the level of forward planning in the build is the cleverly relocated oil filler now taking pride of place atop the tail section and the hidden ignition switch. With the RD cannoning out of the corners in a frenzy of RPMs the only thing taming the beast is the crossed drilled brake rotors and new Dunlop rubber. Which is exactly the way the best 2-strokes are built, everything happens in an instant; they look, sound and smell incredible as they flash by but the edge between childlike delight and disaster is a second by second proposition totally controlled by the right hand of the pilot.