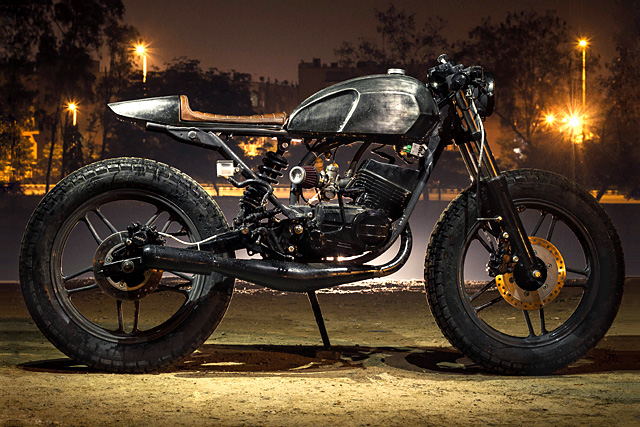 The little two-stroke Yamaha RX135 is a mainstay of India and South East Asia. It’s often the bike you’ll see buzzing away underneath a mountain of groceries, kids and terrified-looking livestock as it picks its way through traffic. It’s simple, reliable and isn’t the kind of bike that gets much attention – beyond the occasional replacement of a blown shock or collapsed fork. But this time the brave little Yamaha has been sculptured into a gorgeous backstreet café racer by Bull City Customs – a New Delhi based workshop that specializes in good-looking custom bikes that are also fun and practical to ride. The workshop is relatively new to the scene, headed by a man with the disappointingly western name of Reginald Hilt. After a career in the textile design industry, Reginald shifted from chopping up his own Royal Enfield 350 Electra to working on other people’s bikes – and Bull City Customs was born. But truthfully the seeds were sown far earlier than that – his youth was spent watching bikes like the RX100, Suzuki 125 and Rajdoot RD350* roll in and out of his father’s garage. Reginald states that the bike was “…built with an attempt to make a city street ripper that is easy to handle and ride as well as looking edgy. Our inspiration for this build was Steampunk style bike that looked like it just got outta the garage, not a showroom. We wanted this build to tell that greasy, noisy story.” I’m not so certain about the steampunk angle, but I think that with its clean lines and raw, unfinished metal he’s certainly built something special – and something I hope he doesn’t take out into the rain too often. The project wasn’t an easy one, with the bike being purchased from a metal scrapyard. And it struggled to meet the definition of motorbike at all. It didn’t have wheels, a fuel tank and the frame was as beaten and battered as a stray street  dog – so much so that Bull City Customs thought about making a new frame from scratch. They put that aside for a while and instead focused on rebuilding the engine – an easy task considering how ubiquitous parts for the Yamaha are in India. A new carburettor was sourced, the inlet valve was ported and with that finished, Reginald began picking through parts from other bikes. The twin-shock frame was modified for a monoshock set up, running a FZ rear shock, FZ front forks and rearsets. The wheels were taken from the deceptively-named Honda Extreme and mated to some highwall Nylogrip Moto-C dual purpose tyres. Brakes were fitted from a Honda CBR250 and clip-on mounts were made on a milling machine. The wiring loom was stripped back too, with the electric start thrown out and the remaining wires hidden under the seat and seat hump. For me, the highlight of the bike is the fuel tank, which was also fabricated from scratch at Bull City. It matches the rest of the bike perfectly – being a great blend of traditional lines and some more aggressive angles that help it match its more modern features like the mag wheels. It’s a bike that straddles the line between a product of the café scene in the 1960’s and something much more recent. Bull City Customs have created a gorgeous little runabout that, while it might not be able to carry 200 kilos of produce and a petrified goat, is far more exciting and beautiful than the original. It’s lines are sharp and consistent throughout, and while the mix of brown leather and raw steel certainly has become a bit of a trope in the custom scene, works terrifically on this fun little back street blaster. *As an aside, it’s interesting to note that the angry little RD was produced under licence in India between 1983 and 1989, many years after it was pulled from sale by Yamaha. It had a reputation for burning through fuel and while it never challenged Royal Enfield in terms of sales, it remains a sought after performance bike in India.