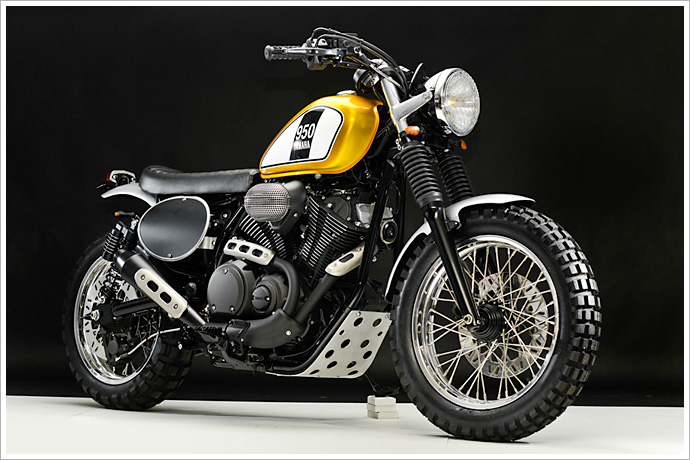 Doc’s Chops is a household name in some parts, especially if the parts you are talking about are located within the borders of the glorious Custom Yamaha Land. There he’s pretty much the undisputed ruler, save for the odd incursion by John Ryland and his band of merry metal men. DC’s army of work on Yamaha’s XV750 has been victorious to say the least and now Greg Hageman, the man behind the brand, has turned his golden hands to something decidedly non-XV. In a build-off organised by Yamaha America, Greg’s now in battle with nine other shops to see who can take a 2014 Star Bolt and make her the fairest in the land. In late July, the folks at Yamaha America contacted Greg about customising a 2014 Star Bolt for them. He was told that 9 other builders, including Roland Sands and Jesse Rooke, along with some of the nations top motorcycle mega-shops had been contacted to do the same thing. The catch? The other shops had already been hard at it for two full months. Undaunted by the immensity of the task, Greg rolled up his sleeves, set his social calendar to ‘non-existant’ and got stuck in. Greg asked himself two simple questions. Firstly, he wondred what was missing from todays line-up of factory motorcycles. Then he pondered what he could design that would float the boat of the ‘King of Motorcycle Cool’ Steve McQueen if, rest his soul, he were alive today? The answer was deceptively simple. A DT400 scrambler. Greg made a conscious decision not to cut the bike into pieces by way of showing off his fabricating skills, but to produce a realistic build that could be inserted into Yamaha’s line up and sold ‘as is’ at their dealerships. The motor remains relatively stock. A set of custom laced wheels and dual sport tires were added, alone with many other details that’s turned this (let’s face it) HD Nightster clone into something that’s so much more. As a true testament to his skills, most all of his build-off competitors has endless amount of funds and equipment to work with. But greg is a one man operation, working out of his home garage. And it looks as if he’s been able to take it to the likes of Roland Sands and Jesse Rooke without breaking a sweat. How’s that for some sweet chops? “I’m just a vintage kind of guy I guess,” says Greg.  “I’m always looking back to things that made me smile when I was a kid. That’s a big influence on my bike designs, I guess. I always wanted a DT400 when I was growing up, but I couldn’t afford one. Now I probably could, but most you find are trashed. I figured I’d compromise here and build a bike that reminded me of my dream.” “My favorite thing about the build is probably the paint/tank scheme. I really like the tires too, but it’s one of the biggest things I’ve had to defend. They are DOT enduro tires, not motocross tires like a few of the armchair critics have assumed. I built this bike to keep riding where your normal street bike has to stop. Gravel, fire roads, dirt trails etc. But still she’s definitely not a pure dirt bike. No jumping or hardcore off road – they make new plastic bikes for that.” At the time of writing, the bike was neck-and-neck with a build from Broward Motorsports; a battle that Greg and the boys absolutely deserve to win. Help him to get the gold by heading over to the Star Motorcycles Facebook page, click on ‘Doc’s Chops’ and cast your vote… [Extra big thanks to Erick Runyon from erickrunyonfotosmotos.com]