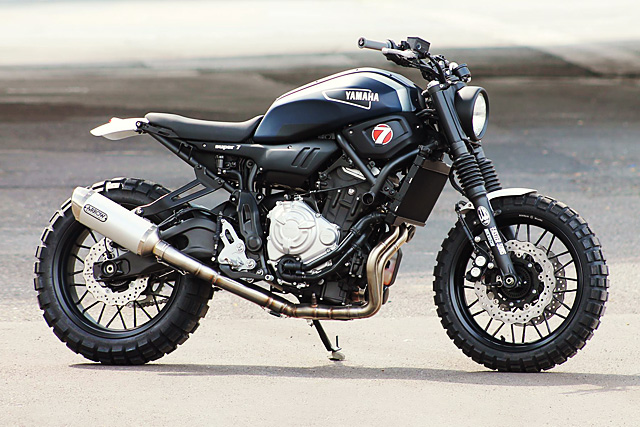 As part of the Yamaha’s incredibly successful Yard Built program, JvB-moto was given the honour of being the first workshop to tackle their new XSR700. Described as a machine designed to have a timeless feel, built on historical icons, matched with tomorrow’s technology for a pure and entertaining riding experience, it has a lot to live up to. But the XSR700 is no ordinary new motorcycle; it’s neither a modern bike or retro remake, but a return to the UJM (Universal Japanese Motorcycle) that combines a non-era specific look and classic design intellection. Having done such an incredible job with their first XSR700 build, known as the “Super 7”, JvB-moto led by Jens vom Brauck are back with a Scrambler version that delivers a new, raw and rough attitude to what is becoming the ultimate urban warrior. The Scrambler also serves a very important role for the company, having developed saleable parts on the first prototype Super 7, this is the display vehicle that demonstrates just how well those parts work on the XSR. That is the true genius of the Yard Built program, beautiful custom machines are created and each workshop ends up with a brilliant array of parts available for sale to the general public, so that you too can own a bike that looks just like this. Jens explains “It might sound strange, but developing custom bike like this takes a lot more time and thought, than one-off bikes, even if they are totally hand-made. All parts have to be reproducible without too much effort, easy to bolt on, everything has to work perfectly and they have to make the bike look distinctive, without changing too much.” Aesthetically there are no monumental changes, but head on over to JvB’s webstore where you can buy the products they’ve developed and you begin to realise how sometimes something very little can make a very big difference. Take the side covers that run under the tank and seat, not only do they give the bike more brawn they neatly cover much of the subframes mounting points and previously exposed bolt holes. So too the front frame covers that give the XSR broader shoulders for a more aggressive look and in doing so gives the factory tank a much more integrated, rather than perched atop look. All of which creates a more aggressive looking Yamaha and nothing compliments that like a heavily bobbed fender, that is also supremely functional using the factory mounts and still supporting the brake lines. Complimenting that rear fender is the dirt bike style tail unit that looks a treat, houses a fully functional tailight and gives a drastically cleaner look than stock. It’s important to remember that not only do these parts have to be bolt ons, no frame cutting is allowed nor anything that reduces the safety of the bike, under the Yard Built guidelines. But you don’t need an angle grinder to achieve a Scrambler look and the JvB-moto bars in distinctive Motocross styling and heavily treaded rubber instantly let you know what this bike is all about. “Of course it is not a real offroad bike, especially as the skid plate is still missing, but it is super fun” enthuses Jens, who says a skid plate is on the way, so too a new seat unit that will be available very soon. To clean the look up around the bars JvB also offer a single instrument conversion that includes the remarkably neat mounting kit and new speed sensor for easy bolt on functionality. With retro bikes back in fashion for the big manufacturers some have taken the easy option of giving customers the look but are lazy in performance. Not Yamaha, the engine is not only incredible it is perfectly matched for everything the XSR700 represents. Utilising Yamaha’s cross plane technology developed over the years in their racing program the 689cc parallel twin utilises it’s 270° crank to deliver sumptuous amounts of torque throughout the rev range. Even better the fuelling is so good and the 6 speed box so well matched that twist the throttle at any revs and she just wants to pull while never feeling like it’s going to run out of breath. If the engine requires one thing to really bring it to life it’s a new exhaust as the ever restrictive Euro compliance means extra weight and restrictions. With such a new machine there was nothing off the shelf but JvB-moto made the wise decision to use an Arrow’s system from the MT-07 that utilises the same engine. Arrow spend a small fortune on R&D, so not only do you get looks and weight saving, but a bark truly befitting the cross-plane bang! With the popularity of the XSR a number of companies, including Arrows, have already confirmed rear cans and full systems are soon to come to market. With the engine providing constant power it’s well matched to a sublime lightweight chassis that provides the confidence you need to tip it hard into the tightest of corners and snap it back the other way without ever feeling like it’ll fling you head first over the bars. But good can always be improved upon and assisting the handling and agility was an important part of the work JvB was keen to do. One of the often overlooked aspects of handling on any machine, but particularly one running such aggressive rubber is a wheel change and the move to Italian Borrani wheels reduces the unsprung weight and allows the standard suspension to operate to its maximum efficiency. Having fitted an Ohlins rear shock to their original Super 7 this is an option you could tick on your own JvB Super 7 Scrambler if you desired a little yellow magic from Sweden. The front telescopic forks are dressed up for a much more Scrambler friendly look with black sleeves between the trees and gators below. JvB-moto can build a killer one-off custom bike, but what the Super7 Scrambler and it’s more subtle prototype sibling prove is they can also create the parts and machine for any bike lover to have a custom of their own without breaking the bank and still remaining fully road legal. We’ve all seen some truly insane customs in our time, but how many of them can do as good a job taking you to work in the traffic, ripping up the countryside or just look the dogs bollocks wherever it’s parked and still keep the law man happy? Many tick one or two of those boxes, but rarely all four and the less is more approach is what earns the JvB-moto XSR700 the full quaddie.