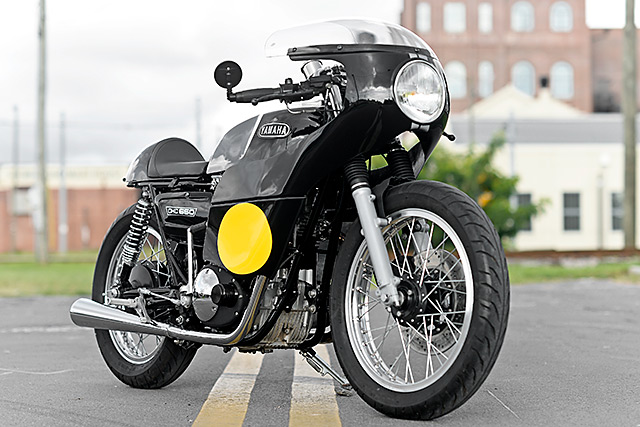 High school graduations often end with parents giving their kids a special gift. I, for example, got a ball point pen with my name engraved on it. But when your Dad is friends with Greg Hageman, one lucky girl got this 1973 Yamaha TX650 retro racer. That my friends is some kind of gift! One of the most accomplished builders in the industry with multiple bikes featured on Café Racer TV, magazine features, show wins and a top ten finish in Pipeburn’s 2014 Bike of the Year Awards, Greg builds show quality bikes for the street with the sort of attention to detail one expects from a man who has attained his Master level 5 Technician status working for more than a decade at a Harley Davidson dealership. This machine was actually built some ten years ago which goes to show just how well his bikes stand the test of time and equally as impressive the modifications were done in a way that allows the “Yamaha Whisperer” to return the 650 back to stock if it’s so desired. But this particular Yamaha is quite different to the ones you normally see roll out of Greg’s workshop, unlike the Café Racers and Scramblers that have made him so famous this is a race replica that would make any factory outfit proud! When it comes to vintage race replicas you simply must get the look right and as always Greg has done exactly that. The full fairings come courtesy of California’s Airtech who have been fabricating bodywork for race teams since the early eighties. What makes this one step above the norm however is that it can also be run with just half fairings by removing the lower sections or with the removal of 6 bolts the whole fairing comes off; Clamp on the Bates style headlight and the race replica turns into a clean café racer. Continuing the race look is the fitment of an XS750 fuel tank that not only looks period correct for a race build but also takes the shape of the long-range tanks used on race bikes at places like the Isle of Man. The seat is typical Hageman in its perfection and suits the build to a t in either guise, with ample padding for long days in the saddle. The side covers remain and keep the overall look of the build exceptionally clean with just their “OHC 650” decals and the Yamaha items on the tank being the only hint as to what’s underneath. The stunning gloss black paint is also a tip of the cap to a time when race machinery didn’t look like they’d been vomited on by a sticker factory; silver racing stripes and yellow number surrounds give the finishing touch to a bike that looks like it belongs in a museum of past GP winners. But looks is not all that Hageman is about, not by a long shot and this build ensures that rideability and reliability are a big part of the equation. The front forks move in tapered steering head bearings and have been fitted with adjustable preload caps that you can see above the upper triple clamp. The swimgarm has been replaced with one from a later model 650 and it too runs on roller bearings with new shocks featuring progressive rate springs. By 1973 many of the earlier handling problems had been fixed with the frame heavily gusseted around the swingarm mount, steering head, and rear engine mount.  With the engine moved forward 10mm and lowered 10mm to get the centre of gravity lower and further forward. With no front guard Hageman has fitted a fork brace instead and gators to tidy things up. The iconic Yamaha parallel twin was stripped down and given a complete rebuild with all new gaskets and internals for flawless operation. Despite his ability to get great horsepower numbers out of all most any engine, Hageman decided to keep this one relatively stock knowing the rider was new to bikes. The ignition system has had the popular Boyer Bransden Digital ignition upgrade and the 650 converted to a solid state charging system. The engine benefits from the fitment of later model carburettors while the exhaust is a stunning twin chrome system that finishes in two low slung megaphone mufflers. A set of clubman bars position the hands perfectly in the fairing cut outs and feature a pair of GT grips. Stock switchblocks are retained for full functionality and a set of bar end mirrors have been fitted, you have to keep reminding yourself this racer is road legal! Keeping an eye on all the vital signs and signalling the ton is close are a pair of chrome cupped gauges that ensure race like minimalism is retained. While the right riding position is achieved with a set of raw metal rearsets that look just the part on this retro racer. While the gift went over a treat the motorcycle bug never quite captured the young high school graduate and after being in the hands of her father for 10 years the TX650 was shipped back to Greg for a freshen up before being sold to an ad agency in California. It may have been a decade between trips to the Hageman shop but with the Classic TT taking off and retro racing back in vogue you can only hope Hageman Cycles delivers another retro racer for worldwide appreciation.