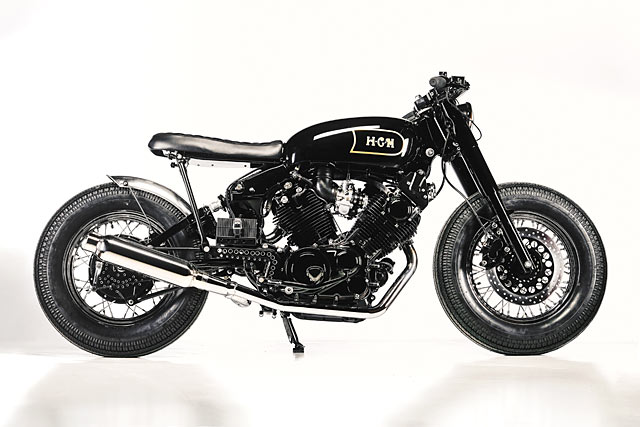 Greg Hageman’s beautiful ‘Vincentification’ of his famous Yamaha Viragos is well documented. Just how he manages to turn a cheesy Harley knock-off into something with such style and grace is clearly moto black magic. But as with most bike builders of his calibre, he’s no sooner developed a mind-blowing new niche than he’s bored with it and looking for ways to mix it up. In this instance, he’s imagined his latest Vincent Virago bobber as a much more ‘in-your-face’ creation that’s about as subtle as a baseball bat to the nose. Wondering what a classic English bike would look like if it was crossbred with a gangster from the Bronx? Forget about it. “I now live in Bettendorf, Iowa, in a place called the Quad Cities,” Greg begins. “The move has proved to be a lot of work and a little more difficult than I had thought. I’ve learned that living in a smaller area in the Midwest versus living in Tampa means that finding vendors for paint, powder coat, upholstery and fabrication supplies is difficult. So for a lot of these things, I still end up shipping things down to Tampa, having them done and shipped back to me, which adds time and cost.” Greg’s other challenge with the new Iowa location was one of temperatures, or lack thereof. “Winters here are pretty serious, and it’s hard to test ride a new custom bike in snow and ice. This last winter was quite long; we had snow until the middle of last month.” Note to self: try to convince Greg to move to Sydney.

“As far as the bike’s style, I’m not sure what category it’d fall into. Maybe bobber meets brat?” Like a few of Hageman’s previous Viragos, this one takes its inspiration from classic Vincent bikes. “My goal once again was to pull some styling from those Vincents and then go from there. The bike is an ’82 Virago, but it has a ’95 XV1100 engine, and a 2003 Yamaha Star front end, so strictly speaking it’s a ’82/’95/’03 Yamaha. I call it ‘Fat Vinnie.’” Greg had a client contact him last year who had previously purchased a Harley Sportster cafe racer from him. He wanted another bike; something he could comfortably use as a daily rider, something dependable and different. They originally talked about building a K-model BMW, but he had just finished building a Vincent-style bobber that we featured here. “He loved that bike, but he wasn’t too crazy about its skinny look. He wanted something with meat on it; a fuller, fatter ride. Something simple, elegant, reliable and not crazy expensive.”

[superquote]“He wanted something with meat on it; a fuller, fatter look. Something simple, elegant, reliable”[/superquote]

“We settled on a bike similar to the Vincent and Viragos I had done, but more simple and chunky looking. The owner is 6’4″, so it had to be set up for a taller rider. I chose to use a longer bench seat, keep the stock peg location, and add some higher clip-ons to better fit the rider.” Greg liked the simplicity of the mono frame, so he used an ’82 XV920 example, then fitted the complete ’03 Yamaha Star front end. He then took an XV700 rear hub, shipped it to Buchanans in California to have a 16×3 rear rim specially made to the correct offset. A quick chrome plate and it was done.

“Then I purchased a low mileage, clean ’95 XV1100 to use for the engine and ignition. We wanted it to be as dependable as possible, and these models have a much better starting system than the ‘80s ones. The engine was cleaned, detailed and checked over thoroughly. I had all the covers powder coated gloss black and all the hardware was replaced with polished stainless. New Mikuni VM34 round slides were then fitted; I use those on pretty much every Virago I build, nowadays. They are reliable and they work very well.”

“For the tank, I took and fitted an aftermarket Vincent replica and had it painted. The electronics consist of a Motogadget M-unit, LED headlight, new turn signals and a Speedhut GPS speedo with integrated tacho. I chose a 4″ dial to reference the big, original Vincent unit.”

The bike is set up so that the new owner could run a set of modern 130/90/16 tires if he choses, but Greg installed a set of Shinko Super Classics for now. He was pretty impressed on how they handled, too. “The bike turns very well. It’s light, nimble, and a pleasure to ride. There’s plenty of torque pulling out of corners and linear power all the way up to the redline. And the ride is cruiser-smooth with the V-Star front end combined with the Hagon rear shock. I’m pretty sure the fat tires contribute to the smooth ride as well.“ “I really do love this Yamaha platform and how these bikes perform and look. I’m actually considering building a run of these bobbers if there is any interest. I think the look is classic while also being unique. I’ve done a lot of cafe racer-style Viragos, but now you can hardly throw a rock without hitting one at a bike show – so this is something a little different. I have been making subframes and parts for people to make their own cafe racer from a Virago, but now I’ve got people trying to capitalize by copying my designs and ideas and selling their own versions for less money. The difference is I am able to keep perfecting and changing things. And unlike them, I’ll always try to stay in front.”