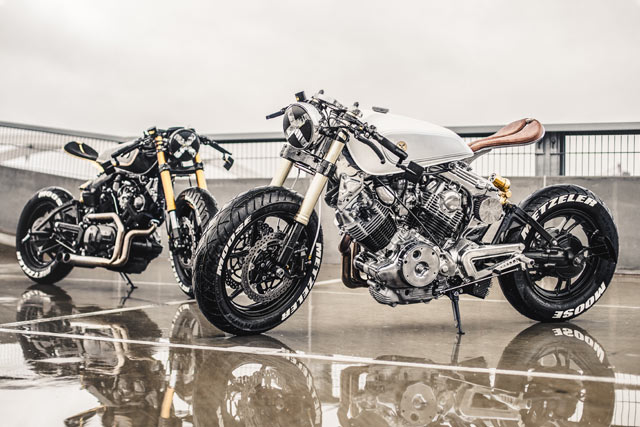 It seems pretty clear to us that there’s something weird going on with the Polish water. Forget fluoride or vapour trails; this conspiracy seems to make entire countries fall in love with certain bikes. Poland’s fate has been deemed by some secret cabal to hold an undying love of Yamaha’s XV. If one appears in our inbox, chances are it’s from Polska. How these shadowy masters manage to make this happen is unclear; all we know is that the country is the current and undisputed king of Virago builds. And clearly Tom from Moose Motodesign has been staying very well hydrated. He’s only gone and built two amazing XV Virago cafe racers for our viewing pleasure.

A mere anchor’s throw from the shipbuilding powerhouse and revolutionary hotbed of Gdansk, Tom hails from the Baltic Sea-side city of Gdynia. “I am a lawyer by trade, but since my teenage years all my energy was focused on the automotive industry. Since I was 8, the only thing I could think about after school was pulling out my old ‘Romet’ from behind my house – the motorbike restored by my dad for me – and riding until the fuel ran out. Then there was the motocross and sportsbikes, but my heart has always beaten faster at the sight of powerful v-twins.” 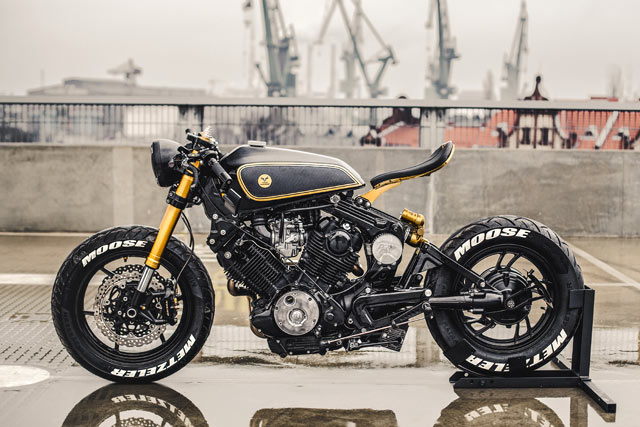 “I am a perfectionist and that was always a little bit annoying,” continues Tom. “This is because I was often unsatisfied with my motorcycles, so I tried to improve and polish them until they were a perfect fit for me. My friends used to tell me that I had a way with bikes.” What a coincidence. My wife says the same thing – but she uses the word ‘problem’ instead of ‘way’. “So my small boutique garage called ‘Moose Motodesign’ was born.” 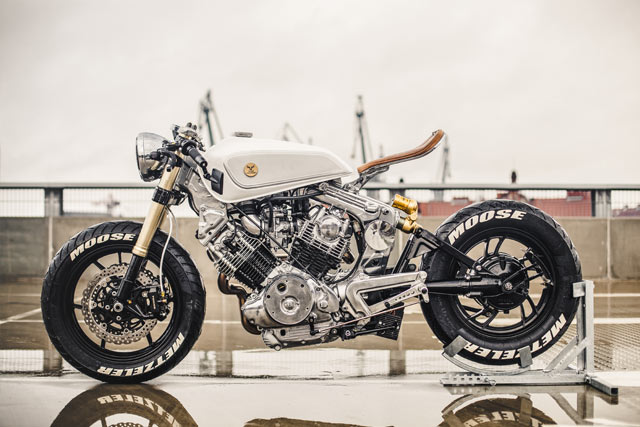 Deemed ‘cafe fighters’ by Tom, he notes that both bikes are XV920s that were originally delivered to the US from Yamaha’s Japanese factory in a brazen attempt to sway the Harley faithful away from their Milwaukee temple. Channelling that battle, Tom continues. “They represent the struggle between good and evil, so I call them “The Good One” and “The Bad One. My friend from the Netherlands found them for me. Their owner was an elderly man and the bikes were a little worn out, but complete, in agood shape and with quite low mileage.” 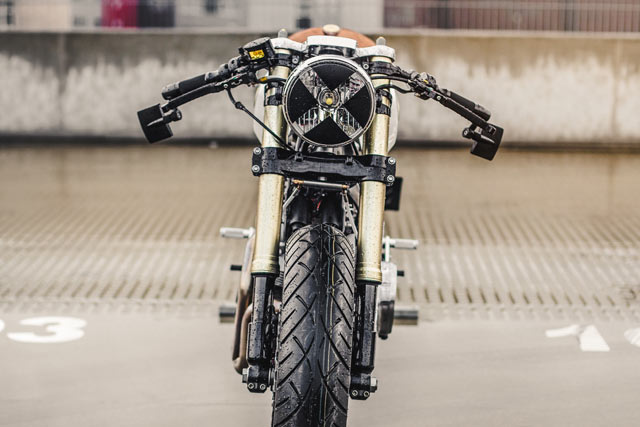 “When I was thinking about the perfect cafe racer, it was always the XV920: easy to modify due to the stressed member box frame with the exposed V-twin engine, reliable thanks to the cardan shaft, and a beautiful line with a light back and central monoshock.”

Then two years ago, Tom bought his first XV920. “I already had a complete vision of what my cafe racer was going to look like, but at the time I could not get involved in the construction process because of my job. That’s why I handed it over to another workshop to build. That project turned out to be a success, so when I sold the motorcycle to a German collector I felt a little disappointed. I knew that it couldn’t just end like that. I wanted more.”

At the beginning of 2018 Tom’s head was full of ideas, so he started to assemble the mass of parts he had collected. “I soon realised that I had way too much. I decided to build two bikes instead of one.” As you do. “I think of them as two separate, contrasting beings representing the struggle between good and evil. I wanted them to be perfect, stylish and reliable. Something that shouted ‘my way or the highway.’ That’s why I asked my friend Adam Wojtkowiak to join my team. Adam is the best master mechanic and most dedicated v-twin lover I have ever met.” Yes, but is he pure evil?

[superquote]“I think of them as two separate, contrasting beings representing the struggle between good and evil.”[/superquote] 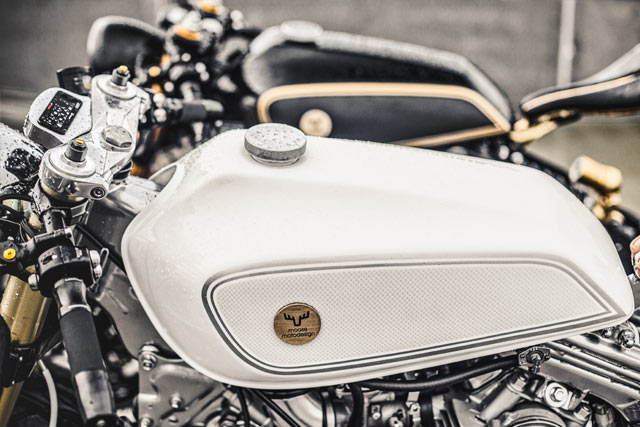 But Tom’s no slave to outmoded machinery. His approach when building is to combine tradition, craftsmanship and modern technology so that they all work together seamlessly. “So for the front suspension, I used a ZX10R set. They are very durable and the fit perfectly – both physically and stylistically. The brakes consist of 310mm double discs, Tokico calipers and custom-made and colour-matched HEL brake lines.”

The upper triples have been modified and integrated with specially designed casings for the Koso Pro digital dash. The ignition switch has been moved and rethought so that it fits into the standard frame opening. For the rear suspension, Tom says that the best choice was Sachs shocks from MV Agusta. They were dismantled and the springs were covered in colors and graphics corresponding to the tanks. 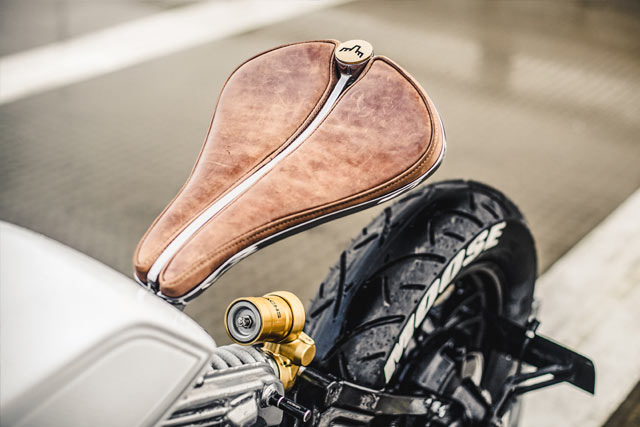 “The icing on the cake are the seats,” grins Tom. “They were supposed to be solo, raw and elegant but with a modern look. The most important was the line; the saddle had to correspond perfectly with the raised tank, creating a dynamic, slightly aggressive body.” Together with the custom mounting, it was entirely made of steel, then plumbed for LED lights and covered with chrome and gilding. The finish was achieved with a high quality Italian tan leather and a custom brass logo.

And it’s not just the big things that Tom and Adam spent time on. “The headlamp LEDs correspond with the racing-style cross on the lens glass. And we created some easy-access boxes for the batteries.” And while the exhausts look not all that different to some older XVs, Tom says that no expense was spared on the grade of stainless or the welds to ensure they were toppest of top quality items. “They were then matched with some large K&N filters and fully restored carbs replete with DynoJet Jetkits to make sure the maximum horsies are spun up. “I’m not a big fan of colours,” Tom says in closing. “I prefer them softer and less bold. And don’t forget – the devil is really in the details. A good custom must look perfect both up close and from afar.” Should you be interested in those details, you can see even more of them in a little video that Tom and Adam made here.