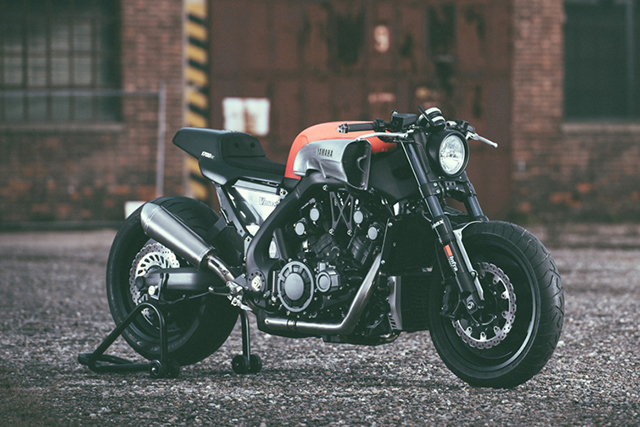 PB:  How did you decide on the design? Did you have a few designs before you chose the dragster meets cafe racer look?

No, that was my first idea and when I first rode the bike this was exactly the way it felt. The aim was to transfer the stock VMAX from an all-rounder  into something more radical.

[superquote]“I wanted to bring out its dragster genes. When you accelerate the VMAX really hard, you feel the brutal power of its engine.”[/superquote]

This is what I wanted to show with the bike. Also, the 30 years of VMAX theme should be reflected in the design. The air intake scoops are based on ones from the first generation VMAX in the 80s. The colour is based on the shade used by the Yamaha GP race team in ‘85. PB: Have you ever built a VMAX before?

No, never. I prefer light weight bikes, but the VMAX is an exception – this thing is so crazy. For me the VMAX was always an all time favourite, since I started becoming interested in Motorbikes around 1985 at the age of 15.  It wasn’t available in Germany, because it was too crazy and powerful – but of course we heard about it and for us kids it seemed like a bike from another dimension. So, when Shun Miyazawa from Yamaha asked me to build a special bike for the 30 year anniversary of the VMAX, it was a great honour and I just couldn’t say no. PB: How long did it take to finish the build?

PB: There’s a lot of handmade components on the bike. What are you most proud of?

I like the alloy fuel tank under the seat. And the overall stance.

PB: What was the most challenging thing about the build?

The tank cover was the part that was most difficult. I really struggled with that, because it had to go with the old VMAX scoops and the new frame and had to cover the huge airbox and all the electrical components. But the biggest effort was to make the bike look clean and somehow effortless. The VMAX is a terrible bike to work on with all its high tech and electrics mounted all over the bike. PB: How much weight did you lose from the bike?

About 35 kilos. Normally the VMAX with its 300 kg weight would not be the typical JvB Moto bike, but once you’ve felt this kind of power delivery, you are addicted and you forget about the weight. Besides, you just cannot find a better bike for this kind of dragster-meets-café racer concept.

PB: How does the bike ride?

Well, it is a dragster; it’s like somebody just kicked your ass. It’s unbelievable. I’ve never ridden anything like it. Some guys from the German ‘Motorrad’ mag managed to get the stock bike from 0 to 100 km/h in 2.7 seconds. PB: Can you tell us all the work that went into the bike :

The parts I changed are the following. The front mudguard has been remade from Aluminium. The headlight has be redone from carbon. The new wheel covers are carbon. The handlebars are modified aftermarket clip-ons and the indicators are by Motogadget.The rev counter is by American dragster equipment maker Autometer. The tank cover is carbon and the air intake scoops were modded using the stock aluminium units from the old VMAX from the 80s.

The airbox and electrics have been heavily modified, and the tail unit has also been redone in carbon. The subframe has been remanufactured from aluminium, using bits of the stock unit. The fuel tank under the seat was completely from aluminium. And finally, the exhaust system was modified with a new 4-into-1 collector and a Termignoni silencer. Basically, all the new alloy and carbon parts are one-off pieces made by JvB-Moto.

PB: Whats next for JVB Moto?

A Yamaha twin. I am really looking forward to that.