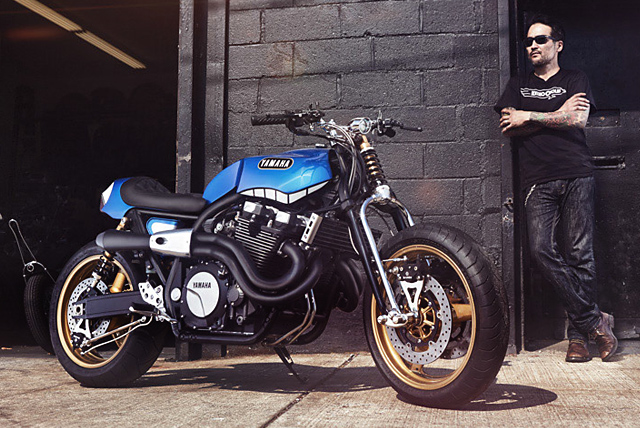 In the cuisine game they call it a fusion. In music it’s known as a mash-up. And in biology it’s a hybrid. Put simply, it’s when you take two different things and make something new, unexpected and original. Now take that thought and consider today’s builder, one Sasaki-san of Brooklyn’s Keino Cycles. He’s bringing the Japanese obsession with craft and dedication to America, the birthplace of cool. So let’s meet the latest result of this grand cultural collision – it’s an unexpected take on a Yamaha XJR1300 created for the company’s “Yard Built Specials” project, entitled ‘Rhapsody in Blue’. The bike is a concept born from the search for inspiration by Yamaha themselves. The collaboration between themselves and Keino is one of many the Japanese company has sought out. It, like many of the world’s top manufacturers, has tweaked to the global bike community’s ever-growing love for bespoke transport and has kicked off projects with some of the world’s best custom builders, a list which also includes the Wrenchmonkees, Deus Ex Machina, Marcus Walz and Roland Sands. As you can see, Keino’s work on the XJR is more than a little original. The first eye-catcher is probably the lower, slimmer fuel tank with the matching scalloped tailpiece. It’s just about now you’ll probably notice the inclusion of Keino’s signature springer front-end designed suspension. Sure, it’s unexpected on a bike like this, but it’s hard to argue that it doesn’t work well. But the customising doesn’t stop there. There’s custom brake mounts, a new headlight assembly and custom handlebars. The bike also gets a Brembo brake upgrade, exposed air filters and a single seat on top of a custom rear frame. The special rear shocks match the front springer system and eagle-eyed classic car lovers will recognise the rear light is an original piece from a vintage MG sports car. The retro, Yamaha-inspired paint job and gold wheels set the bike off well and a set of throaty side exhausts and mufflers completes the look. Keino’s inspiration for the XJR build comes from Yamaha’s 90s bikes along with a clear passion for the Japanese inline four air-cooled engine. Considering Keino’s first motorcycle influences as a child were all Yamaha 650 ones, he somehow seems to have been destined to be working with Yamaha on a custom bike at some point. And judging by what we see here, we doubt this will be the last. Bring ’em on, we say.