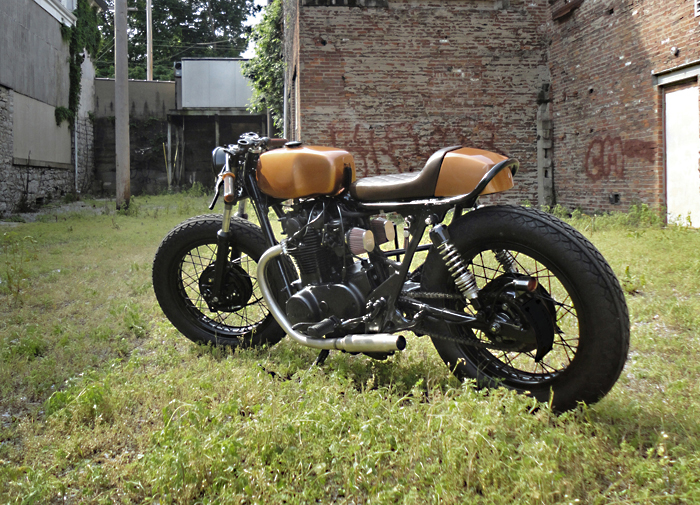 I can’t believe it’s almost been a year since we featured Scott Halbleib’s CB450 bobber. Lucky for us, Scott has been wrenching again, but this time choosing a trusty XS 650 as the donor. “The bike ‘began’ over a year ago when I saw the ’69 Aermacchi scooter tank on Ebay for $65,” says Scott. “I had seen a custom 650 with a similar tank and kind of dug it.” The tank then sat in the corner of his garage while he took a long break from the CB450 which he finished in May of last year. And then winter came, so Scott started looking for a XS 650 to hibernate with. After a few weeks, he found the right specimen at the right price. “It ran, but was a little rough around the edges.”

The first thing he did was tore everything apart, grinded, sanded, pressure washed, and rattle-canned the frame and motor. “We had 3 bikes going at the same time so luckily Chad Francis, also of the Louisville Vintage Motorworks group, cleared out some space to spray and spray and spray,” he says. “I had to make some minor modifications on the tank and I began the long search for petcock and gas cap. Pingel had a petcock that would do the trick, but it was pricey. Then I found out after 2 months of searching a late 60’s Honda gas cap fit perfectly. The wheel/tire combo was measured, then re-measured and finally decided upon. I didn’t want to use a disc front though, and I wanted to drop it down a bit so we sourced an old Honda front end. That and a $5 spacer from Magnum Cycles and we had a what we needed to test then send it off. Woody’s Wheel Works assembled another nice set of wheels – flanged Excel rims, Buchanan spokes – with everything powdercoated semi-gloss to match the motor.”

“The original plan was to bob it but once I stripped it down and saw the hoop in the rear plus a bit of the exposed neck between the tank and seat, I decided it would be more of a café. I used florist foam to sculpt and shape the cowl to match the tank, then went about building a seatpan and carving the foam to shape the seat the way I wanted. I handed the cowl off to Brad White, a local metal sculptor and he shaped and welded it up for me.” “After that, it was all the little tedious sh*t. Controls, cables, plate brackets, lights, electronics, fuel lines, etc. Mike XS sold me a LOT of parts, ignition was from PamcoPete, as well as parts from Lick’s, TC Bros and the good guys down at Dime City. I don’t recall where I got the grips but they were a must-have and determined the color for the bike. I was debating between rootbeer and copper. I found the rootbeer colored grips and decided the seat would match the grips and I’d paint it copper. Well the first time it was painted, it was the color of a Miller High Life can thanks to the idiots at one of the local paint shops. New supplier, back to the painter, and we have copper. A friend turned me on to a local upholstery guy who knocked out a great seat. The pattern was chosen to match the last minute decision to go with the Coker diamond pattern tires.” Then the most important part – getting it running. “We spent the typical 3-4 long days in the garage drinking, smoking, testing and tweaking until we got the electrical and fuel sorted out right. It sounds good, runs good, and is a blast to ride. I have to mention that it just wouldn’t be possible to get through these things without my right-hand man Doug Devine. He takes over when my patience runs out – which is pretty much immediately.”

Isn’t it great that a bike like this can all start from the random purchase of a humble Aermacchi scooter tank? Makes me wonder what else is out there on ebay. You know, that perfect part that’s worth building a whole bike around.