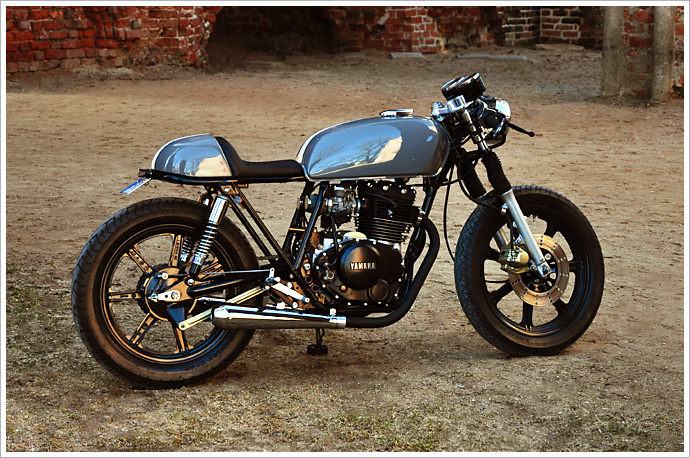 Ebay has changed the custom bike world in many ways. Anyone wanting unique parts can look all over the world for what they require, but on the other hand if the seller is unscrupulous, are you really going to fly across the globe to confront them because your fork gaiters don’t fit? One such customiser who has utilised Ebay to it’s fullest extent is Volure Cycles, based in Estonia. Using global buying ability, matched with neat engineering skills, a rather pedestrian Yamaha XS400 has been tranformed into a slick café racer. And with nearly all the work done in the owner Sander’s garage, Volure’s first build has come up looking like the work of a bike builder with a lot more experience. And best of all, it is proof for your boss or partner that trawling Ebay isn’t a complete waste of time. Mucho thought, mucho work and many different ideas were tried out by Volure during the course of the build. Working on small components, the bike was slowly built up in Sander’s mind, and he got to build up a relationship with his postman with all the parts rolling in from Ebay. The first job was to drop the engine out, and strip the frame back to bare bones. The engine was rebuilt while the frame components were away getting sandblasted, getting treated to new seals and rings. On the intake side, the stock carbs suck in air through pod filters, the fuel system controlled by a dirtbike throttle assembly. On the exhaust side of things, the stock headers have been modified in order to fit megaphone style mufflers. With a cool café racer build comes great responsibility to honour traditional aesthetics, and Sander has made sure the lines of the bike flow smoothly. After ditching the stock rear hoop and fender assembly, a custom hoop was fitted up and a fibreglass ducktail fashioned in the Volure’s workshop. A seat was made up to follow the lines of the ducktail, an XS tank chosen to fit in with the build. The frame has been detabbed, the foot controls changed over to heavily modified mid 90’s GSX-R rearsets, leaving very little on this bike as being untouched during the build. For electrics, the bike has been taken from, not added to. The battery and assorted componentry have been relocated to the ducktail, the right hand switches remover altogether. To give a special touch to the bike, Volure had customised XS400 decals made up to fit to the standard meter cluster, then dropped the unit to suit the lines of the bikes, by fitting a bracket made for the job. Starting out with a flat red XS400, the build took Volure 6 months to complete, and Sander has been tweaking little touches on the bike since. Starting with a simple modification to the tail light & rear signals, the build continued on until the bike you see before you was created. For a first build it is pretty impressive, a good indicator of the talent of the builder, and a chance to see how the world wide web is affecting custom bike culture.