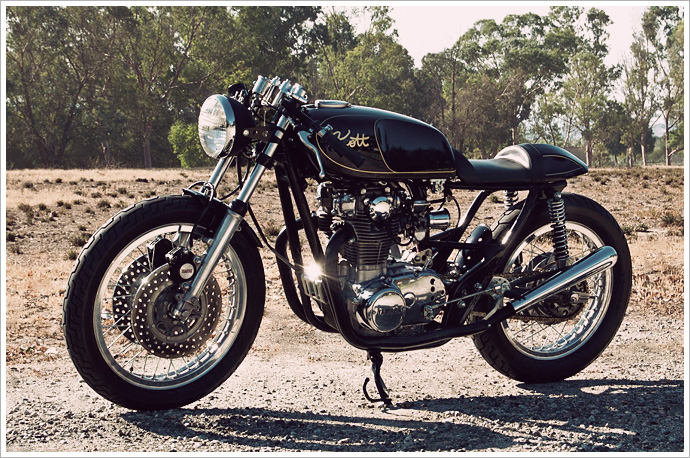 Written by the builder, Dustin Kott from Kott Motorcycles.

Years ago I rode a 1972 XS650, also known as the XS2 from Los Angeles, California to Sturgis, South Dakota. I was wearing a cheap rain suit from Walmart in the pouring rain going at least 100 MPH to dodge the inclement weather. When I stopped at a gas station some locals took one look at me and said “you were going so fast that your damn clothes are tearing off! You passed us like we were standing still!” These are my memories of the infamous XS650 made famous by the legendary Kenny Roberts. I decided to take on this project when it rolled into the shop because at the time when I owned my XS I simply did not possess the skills and knowledge to re-purpose it into a more sleek and refined machine. As a shop we have come to be known for our renditions of the Honda CB series so taking on a Yamaha was a testament to actively breaking paradigms of what is expected. The XS650 has the reputation of being the ‘best Triumph that Triumph never made’. This being said, the Japanese mimicked the overall stance, footpeg position, tank design, and general engine shape. Without a closer look, the two are easily mistaken for one another. In paying homage to the parallel twin look that is so synonymous with English motorcycles, the great Norton Commando was the main influence in the design of this machine. In order to create a more aggressive stance and fluidity of frame lines a Yamaha XS750 triple tank was fitted to the frame with some necessary tank mount alterations. With the factory indentations and the positioning of the hand crafted rearset plates, rider position was improved. The steel constructed seat pan and cowl copied and repeated the indentations of the tank for the sake of continuity, and created an ideal “pocket” so as to not have the rider slide off the seat under the torque of the 650 twin. In maintaining the inspiration of the English twin, extensions were added to the single header pipes for each cylinder and kicked up at a more aggressive angle per retro race machines of the era. Handling was considered with the fitment of shouldered and re-laced aluminum wheels, Hagon rear shocks, new fork springs and replaced swingarm bushings. An extra drilled rotor and caliper was added to the front end in order to optimize braking power and to assist the older technology of the rear drum brake. Under close scrutiny, those who are familiar with the XS 650 frame will see numerous modifications made to accommodate rearset positioning and beautification.

As mentioned beforehand, the Norton Commando was emulated in many ways in order to  create a more well balanced and repurposed machine. The most noteworthy influence was in the jet black paint scheme that incorporated a hand-striped gold line to accentuate the shapes and shadows present on the bike.

To see the bike in action, check out the vid below…