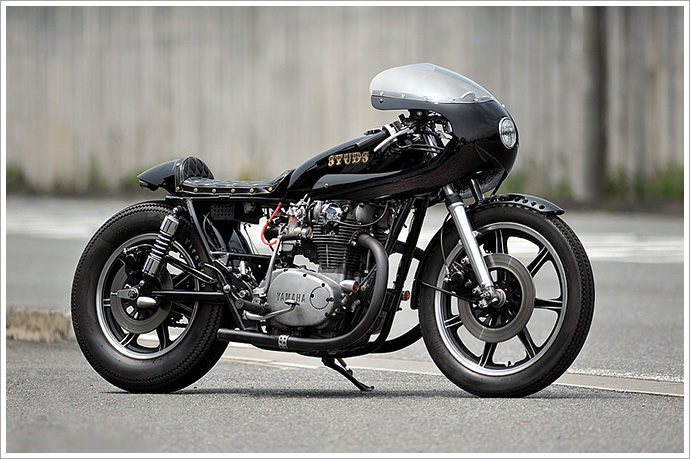 Here’s a shop we haven’t come across before. As with our last bike, this shop is located in Kyushu, Japan’s southern-most island and goes by the name of Studs Motorcycles. Their latest bike has been on our radar for a while, but it wasn’t until now we were able to get and solid information on it. And are we glad we did. While the build doesn’t break any new ground, the overall design seems to strike some sort of magic chord or stir a primal instinct that ticks all the boxes in regards to what a really cool bike should be. It’s black. It’s low. It’s got acres of rubber and it’s sleeker than a greased blackbird. The Studs guys are quick to point out that the Yamaha engineers spent 5 long years developing the XS. It was unabashedly based on the Triumphs of the time and fully intended to make a big splash in the American market, hopefully delivering some profits for the company along the way. That intention was helped by one Kenny Roberts, who successfully raced the engine in the AMA Professional Dirt Track Championships. Reviews at the time of it’s launch noted that apart from the rather exotic Laverda 750S, also launched in 1968, the Yamaha had one of the most advanced unit construction, SOHC engines on the market. The shop’s aim was to produce a ‘Rockin’ Café Racer’ style bike, but with a twist – something that was fully intended as a statement of intent for their shop. They were looking for a bike that both shouted Café from the rooftops, but was also unmistakable a Japanese custom bike. Engine modifications were handled by one Tsuruta-san. As a longtime engineer in the Japanese drag racing scene, he revived what was a fairly well-worn lump of iron and managed to produce something that, to quote the guys themselves ‘exhibited performance that far exceeds the specifications of the original bike.’ We can’t be certain, but we think that’s Japanese for ‘this bike kicks ass’. For us, the clarity and vision of the end product is a strong indication of a shop that has already developed it’s own unique aesthetic – something that seems to resemble the beautiful love child of John Player Special Racing and the Sex Pistols. And how could you not like that? Closer inspection reveals many finer points that have come to really define the Studs bikes. There’s the drilled levers, gold lettering and pinstriping, the black leather, the gold stitching, and the brass buttons. Pipes are apparently straight-through numbers and are, in partnership with the twin Keihin CRs, delightfully ‘unbareable’. Excellent.