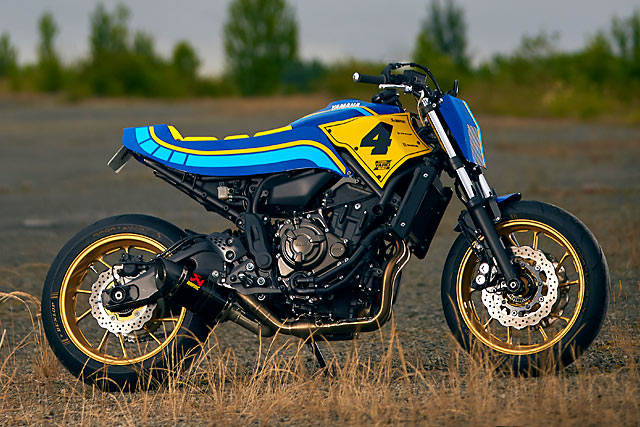 The 1980s sure was a different time, and in an era of minimal rules and regulations motorsport was full of radical prototypes and financed largely by big tobacco. Greed was good, there were gnarly designs and Gurney flaps, and companies like Gitanes and Marlboro were branded everywhere. Turns cigarettes will kill and those funky shaped cars and bikes could be lethal too, with the motorcycle GP circuit claiming 14 lives in the ten years. But Spain’s Russell Motorcycles have found a way to have all the fun without the fatalities, building this stunning tribute to the dazzling decade from a new Yamaha XSR700. It all makes even more sense with the bike built as part of Yamaha’s Yard Built program with the latest collection of bikes themed ‘Back to the Future’. Knowing other builders would probably lean towards a Marty McFly looking contraption, Eduardo and Dani took the opportunity to recreate one of the classic racing liveries of French tobacco brand Gauloises, with a decade correct outrageous design. Understandably the two-man operation is “very proud that Yamaha would think of us for this project.” Knowing the general look they had in mind they then had the decision of just how far to go with the build, display piece, a full on show bike but not street legal “or something that we can ride with it radical but having the opportunity of passing all the technical controls required to ride it on the roads. This was it!” exclaims Eduardo. Then the exciting day arrived with a brand new XSR700 delivered to their workshop, in the principality of Asturias, a region of northwest Spain and work could commence immediately. Up on the lift the two lads got straight into ripping the bike apart, removing the seat and all the factory bodywork. Cutting up the chassis and fabricating a new subframe would make the fitment of the new panels they had planned much easier, but the decision was made to leave the entire chassis as it left the factory, so that the bike could be returned to stock in just a few hours. The rear section of the original tank remain, with the front half modified for changes to come and it all sealed up again. While the tank was off the rear body panel was fabricated, stretching all the way from the very back of the bike, over the subframe and onto the shoulders of the fuel tank. Hand formed, the single piece is made from steel and can be easily unbolted with careful use of factory mounting points. Such a large piece took time, with it constantly being offered up to the frame and then back to the bench for fine tuning. The single piece also serves as the seat base with individual bits of EVA foam cut to serve as the seat and act as an integral part of the overall design. Moving forward the side panels that act as number boards might be much smaller in size but proved to be the hardest part of the entire racer project. Made of steel they required a unique bunch of curves, folds and humps to clear the electronic components that hide beneath that the boys were determined not to move, making transformation back to stock that much easier. Again using the factory mounting points they made each panel fit with the two sides identical despite the varying components they had to clear. [superquote]“Then it was time for the Gauloises colour scheme, with the twin blues broken up by a very vibrant yellow.”[/superquote]

The factory fitted round headlight would have been far too conventional for such a build and in its place the team have crafted a steel cover. The shield like panel fits perfectly between the forks and with drilled steel in the middle an LED slim fit headlight is able to shine its way through. The stock front fender has been toss aside, but the supports are used to affix the hand rolled steel fender used it its place. Then it was time for the Gauloises colour scheme, with the twin blues broken up by a very vibrant yellow. Of course one of the things that makes the XSR700 such a popular bike is the 689cc parallel twin, that defies its configuration to be one of the best bang for your buck new engines money can buy. But a good thing can always be better and a call to exhaust giant Akrapovič had them on board with the project sending out an all new full system and full carbon fibre end can. Suddenly another big company came calling with Dunlop offering up a set of their SportSmart TT tyres that look brilliant on the newly painted gold rims. Wanting to continue the racer’s clean lines the initial modifications to the factory tank allowed for the single digital speedo cluster to be remounted off the bars and down in front of the filler cap. With the big factory mirrors gone the new funky lines are allowed to take centre stage completely uninterrupted. To finish the Yamaha off the yellow number boards got a bunch of sponsor decals in black and it was time to head straight to the 2018 Wheels and Waves festival to show off their ’80s wares. The decision to go outside the box paid off with Russell Motorcycles receiving plenty of attention and now they’re looking for a fan who might want to call this crazy decade flavoured filly their own.