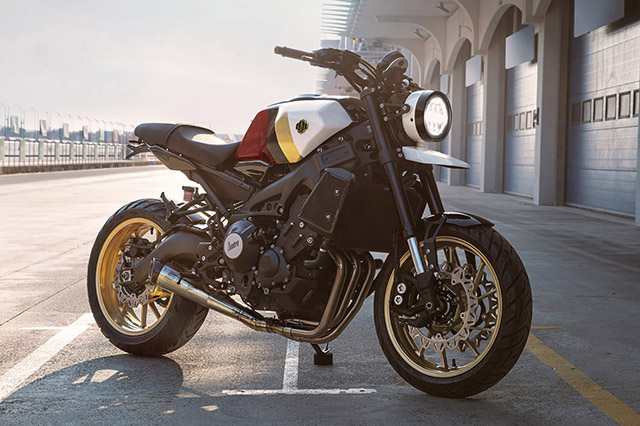 Created by Bruce Lee in the mid-to-late 1960s, Jeet Kune Do is a philosophy and form of martial arts that places immense importance on the development of one’s spirit and skills, while the combat aspect puts a major emphasis on adaptability, fluidity, and inflicting maximum damage through minimal effort. Mert and Can Uzer, the brothers behind Istanbul’s Bunker Customs, have very much applied Lee’s teachings and philosophy to their latest Yamaha Yard Built build — entitled “Chimera” – honing their skills in order to painstakingly develop a motorcycle design that offers a hugely transformative impact through minimal modification. 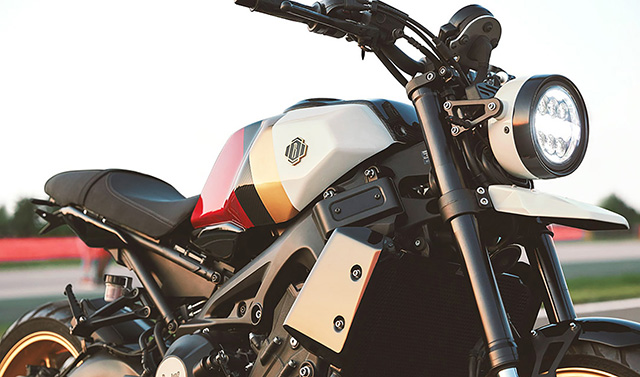 “From a form perspective, the tank is the most significant design element of any bike – the signature of the bike, if you will,” explains Mert. “As soon as you change it, the bike turns into something completely new, so that’s where we focused our efforts. We wanted to show how easily one can transform the XSR900 into something completely unique – just by swapping out the tank panels.” The tank can be purchased through the Bunker store and is a simple mod to change the look of your XSR900. 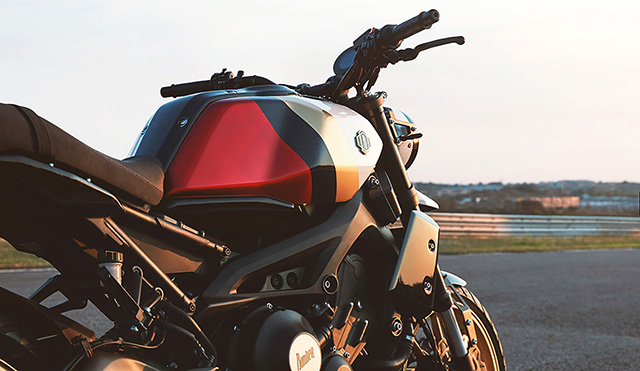 For the new tank panels, the Uzer bros took an elaborate route, utilizing marine-grade manufacturing techniques to produce the new covers in carbon fiber. First, the pre-impregnated weave was carefully laid over CNC-machined aluminum molds before being cured in a pressurized (100psi) autoclave oven, and then finally treated with a UV-protective glossy final clear coat for an absolutely flawless finish. 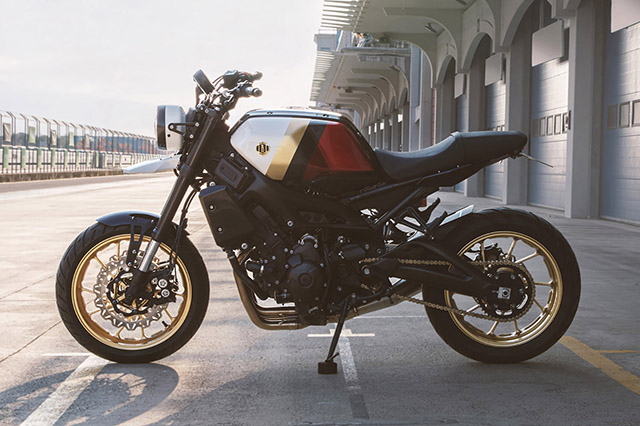 “It took us almost two months just to achieve the concept design, and the project really forced us to take our game to the next level in the way we execute. We started with the 3D scanning of the XSR and translated the initial 2D concept renderings into 3D CAD drawings. This was no easy task and it required technical knowledge and expertise we didn’t fully have when we started,” says Mert.

The new carbon tank covers feature a more angular design, retaining pronounced knee-dents but flowing into a broader and brawnier front and sides. Because the stock tank top cover no longer fit, Bunker also whipped up its own carbon fiber unit, using the same meticulous process as on the side covers. 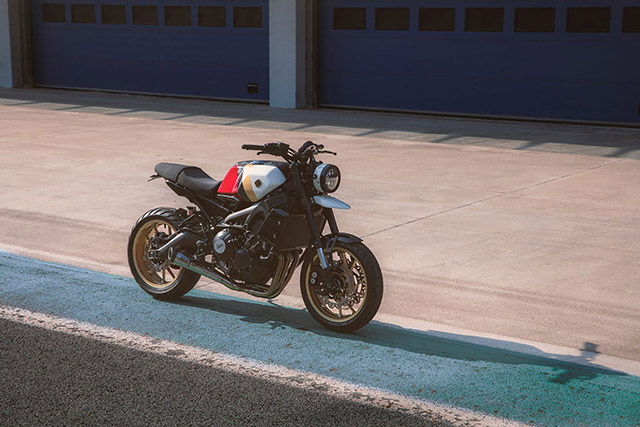 “We’ve been experimenting with carbon fiber for the last four years, but we made a major breakthrough a-year-ago, finally achieving the CAD to actual perfect product with the definition, accuracy, and surface finish we were after,” Mert proudly tells us. 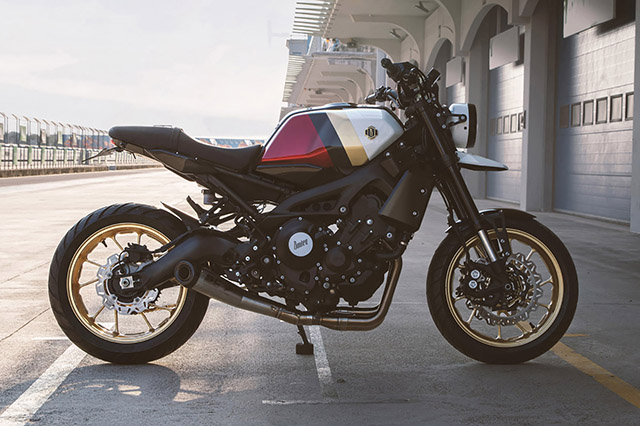 Because the XSR already sports a seat and subframe that were heavily influenced by bikes from the modern customs scene, the stock tail looks right at home on the one-off triple. Mert and Can did tidy up the rear-end, deleting the fender and adding one of Bunker’s tail tidy kits, which includes a license plate bracket, LED taillight and micro-indicators in aluminum housing. 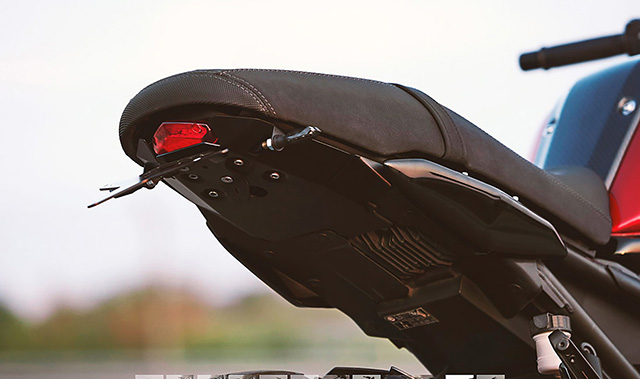 The donor’s hallmark drilled aluminum subframe supports and headlight ears are no more, with the former now shrouded in one-off covers, and the latter having been replaced with custom aluminum brackets. The stock headlight shell remains in play, though it’s been repainted white and fitted with an aftermarket projector-style LED headlight. 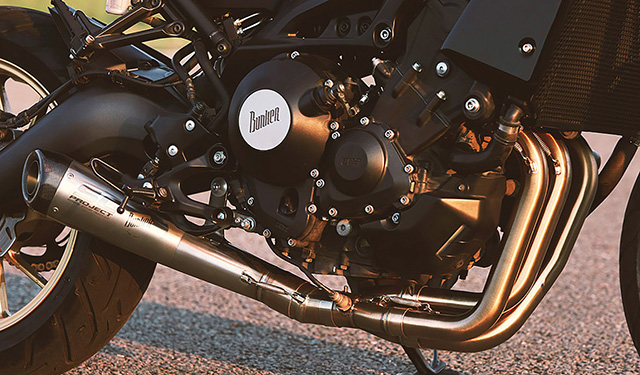 Out front, the brothers Uzer tacked on a stubby custom beak inspired by the Ducati Hypermotard and Aprilla Dorsoduro. Beneath is a second, more modern one-off fender that closely hugs the tire. Custom radiator guards and side-covers were crafted from aluminum and then painted to match the frame, replacing the stock XSR’s less-than-popular brushed aluminum items. 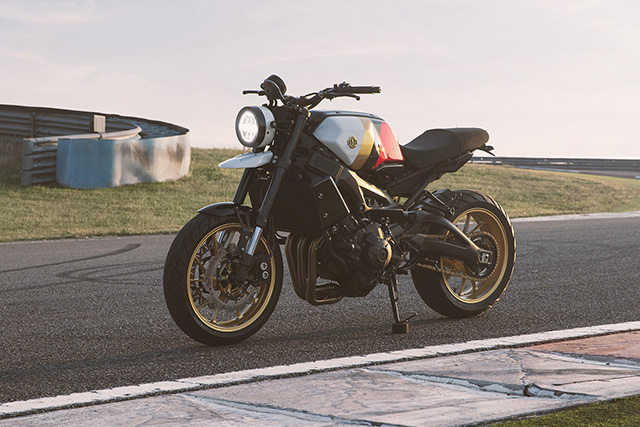 The 847cc triple was left untouched, aside from the addition of an SC-Project exhaust with a carbon end-cap. The stock suspension goes unchanged, but the brakes have been upgraded with fully-floating EBC petal rotors. The XSR still rolls on its factory wheels, though they’ve been painted gold and shod in Anlas Capra RD rubber. The tank covers were also hit with a custom red, white, and gold livery, with negative spaces of exposed carbon fiber and special Bunker badges on either side. 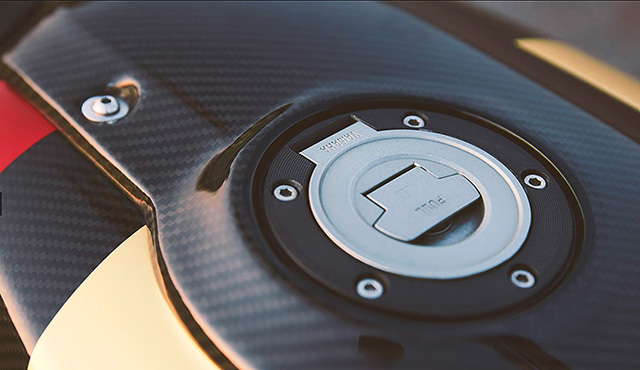 More than just another one-off build from Bunker, Chimera is a prototype, showcasing an array of bolt-on parts that the Turkish shop is slated to soon release, including the tail tidy, beak, front-fender, headlight brackets, and carbon tank covers (a special discounted price is being offered for the first ten carbon tank cover kits). Mounting the parts doesn’t require any modifications to the frame or anywhere else, with everything bolting directly on to the stock points. Mert and Can say the new tank covers can be mounted in less than ten minutes. 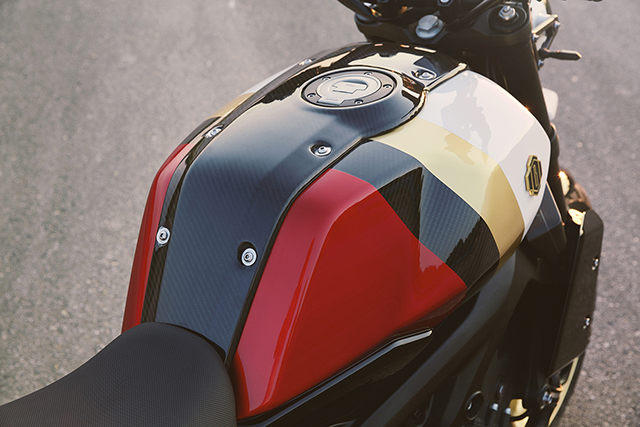 “Maybe one in a hundred riders have the means to commission custom bodywork. That’s why for us, it was crucial the parts in the kit be realistically attainable, and not just for a lucky few. It was a combination of years of knowhow, a year-and-a-half of research and development, and untold resources to make these specific parts available for purchase to the public,” states Mert. 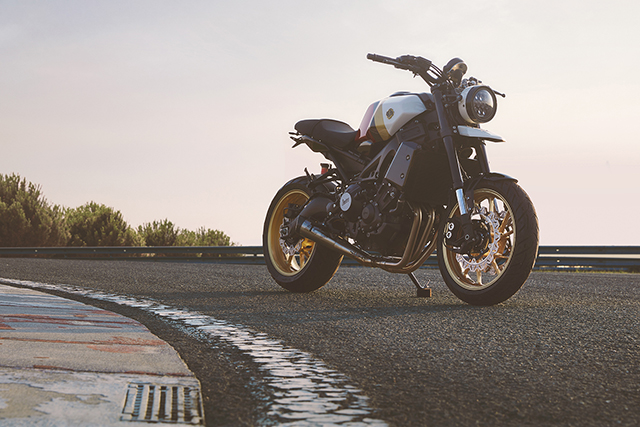 Despite being little more than a bolt-on set of tank covers, a tail tidy, radiator covers, fenders, an exhaust, and a paint job, Bunker has thoroughly demonstrated that the right tweaks, even while fairly minor, can transform a stock donor into a knockout of a custom. 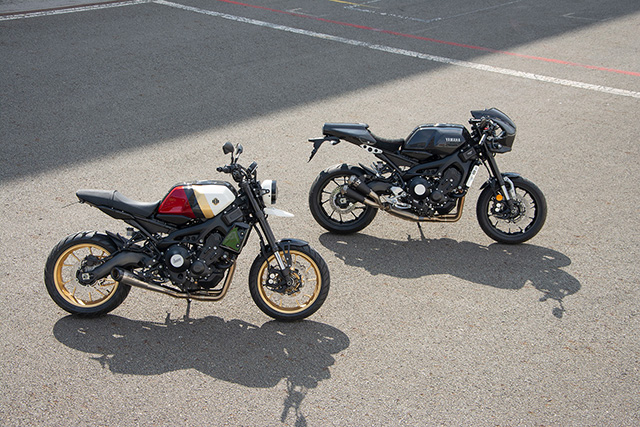