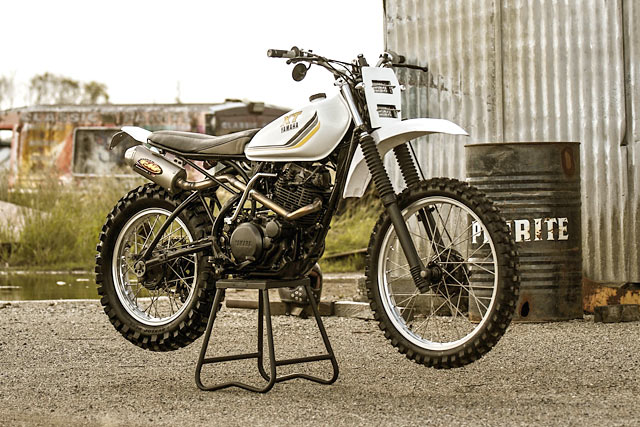 When you mention a Yamaha XT to any bike enthusiast a few things come to mind. Yamaha’s XT series set the bar in off-road racing for a long time, and since then they’ve been synonymous with durability, performance and reliability. So of course, I have one rolled into the garage that looks anything but. Ex-farm bike. Rolling chassis, motor, box of parts and three words, “Make a scrambler.” 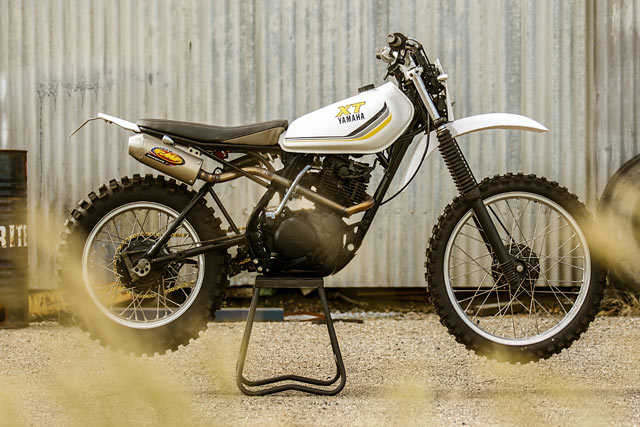 The easy route would have been to mount a nice, rounded fender and a run-of-the-mill round tail light with roll-stitched seat – probably lower it so it looked nicer – throw some 50/50 tyres on and be done with it. But I don’t tend to take the easy way out and the Yamaha XT250 MX scrambler wouldn’t be any different. Why not build a custom motocross bike? I couldn’t think of a good enough reason, so that’s exactly what I did. 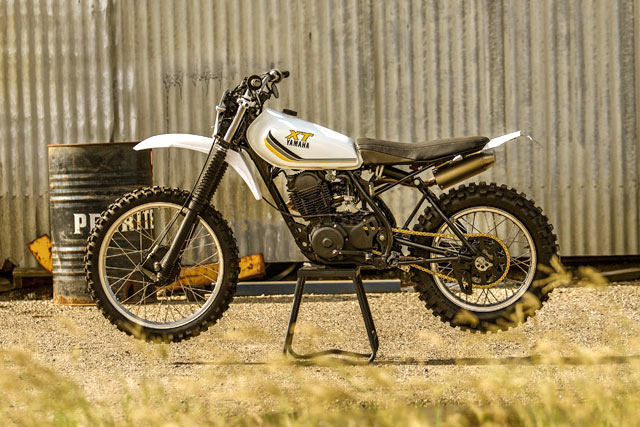 The tear down was simple; I think the only thing I removed was the old front fender. The rest was already missing. The light frame plus the monoshock of the XT250 lends itself to a simple design. The top seat rail was maintained with the bracing modified to better suit my ideas for the tail and exhaust. Next, I dropped the forks through the triple clamps to sit nice and high on the front and modified the rear suspension to suit. Overall, I lifted the little Yamaha about 35mm.

The wheels were stripped out, the rims were polished up and re-laced with stainless steel spokes. They were then wrapped in a Dunlop K606 off-road tyre with a 17″ rear and a 21″ front. Once the bike was back on its own two feet, the exhaust was fabricated. A stainless steel header was put together piece by piece and finished off with a modified FMF Powercore 4 muffler. The muffler was cut and shut outside and in, and the link pipe was fabricated to snake inside the subframe. This is one of my favourite little details and I think it looks pretty trick. 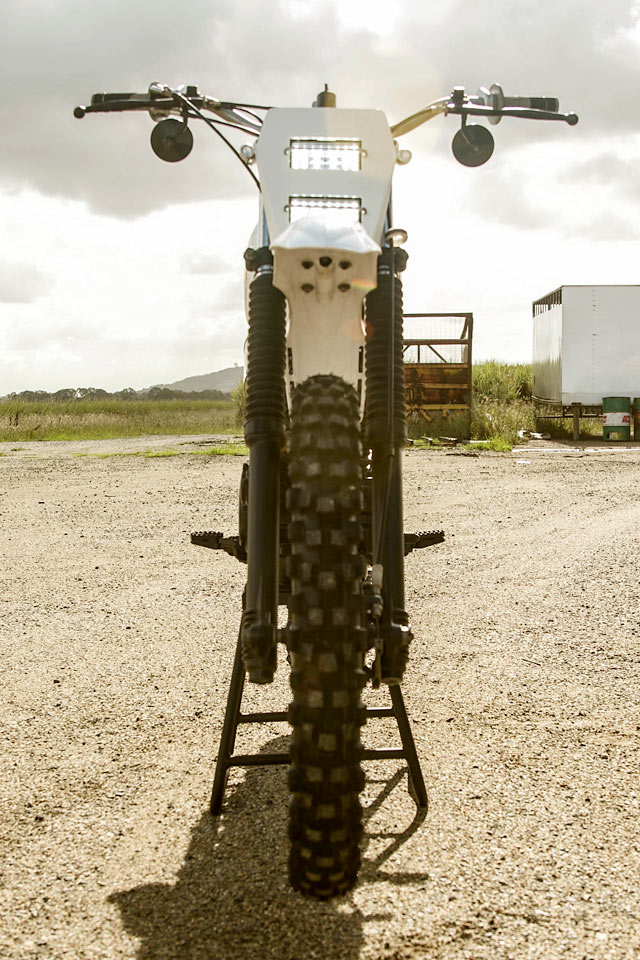 Taking further styling cues from the motocross bikes I grew up on, I went about hand-making an aluminium fender to finish off the rear of the bike. Built to house an LED brake light and a minimal mud guard, the tail-piece was shaped and welded to accentuate the bare knuckles, off-road feel of the project. An important detail for me here was the opposing angles of the muffler and rear fender from the side; them crossing over each other just slightly is something you’ll often see on 4-stroke motocross and enduro bikes, and something that I always liked the look of. 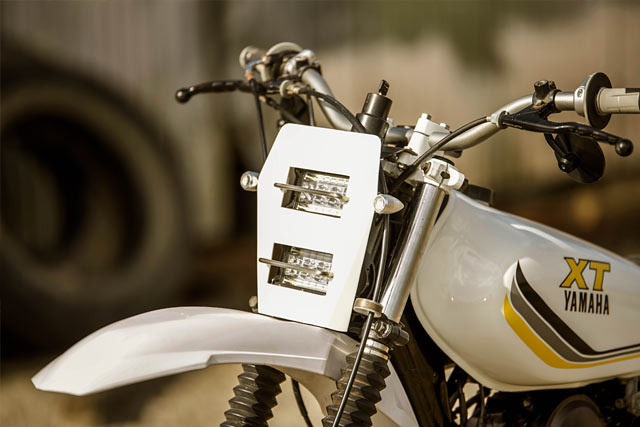 Completely hidden under the seat, the electrics on this bike are fairly minimal. A 12-volt conversion was needed, with the addition of an Antigravity Battery. There’s no starter motor and the lighting circuits were further simplified with the use of the Purpose Built Moto Black Box control module. It also has a kill switch circuit and it takes care of pretty much everything electrical. It was then run through a set of push-button switches on the handlebars, which delivers a super clean finish. 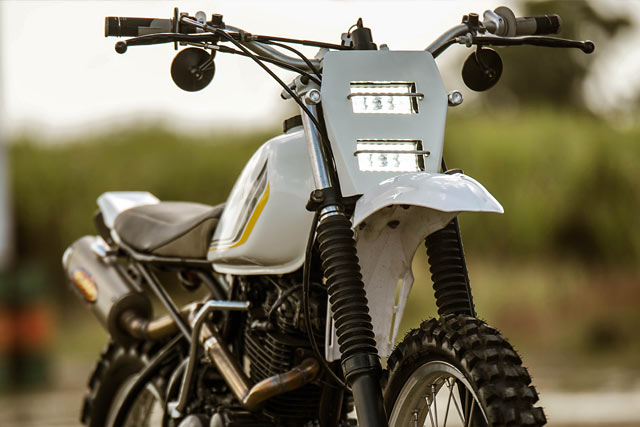 The XT250 scrambler bars are a Renthal low-rise MX units with standard levers, pro-grip grips, and some custom scrambler mirrors that you can learn how to make here. Staying on the front of the bike, a universal super motard fender was fitted over the 21″ front wheel and a custom aluminium front plate was built to house two LED bar lights plus some of our hollow-tip LED turn signals. The headlight mounting plate was finished with some stainless steel brush guards, which I now know – thanks to Bruce at Iron & Resin Garage – look like a set of kitchen drawer handles! Fuck. I guess these things happen when you spend your life in a garage isolated from the outside world. The digital gauge mounted off the top triple clamp is a Koso enduro style dash, with warning lights and a built-in tacho. 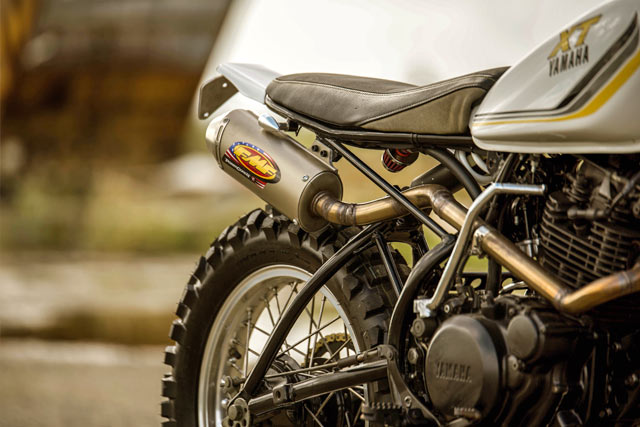 [superquote]“Everytime someone paints the inside of their carburettor, a motorcyclist buys a step-through scooter. And nobody wants to see that.”[/superquote]

With the styling all but sorted the motor was dropped out, cleaned up and a new clutch put in to handle the mighty 13.5 horses this ball-tearer was putting out. The carb and intake were also upgraded with a Mikuni flat slide carburettor and DNA air filter was put on. When re-building the carburettor I was shocked to see someone had painted INSIDE the intake. Yep, some 100% A-grade matte black was used to make sure the carburettor was blacked out. For those playing along at home, don’t paint the inside of your carburettor. Every time someone paints the inside of their carburettor, a motorcyclist buys a step-through scooter. And nobody wants to see that. Once wired up and firing, the XT250 was serviced and tuned on the dyno by an old mate of mine – Jamie at Dynomite Moto in Brisbane.

The one thing that was retained on the XT from the factory was the tank. One of the last tin tanks on these bikes, the white, yellow and grey combo was too good to change. A set of reproduction factory decals were painted in with the new fenders and hand-made guards were sprayed to suit. The custom MX-style bar seat was finished and upholstered by Jamason from Timeless Autotrim (we share a shop) with some grey and yellow accent pieces. 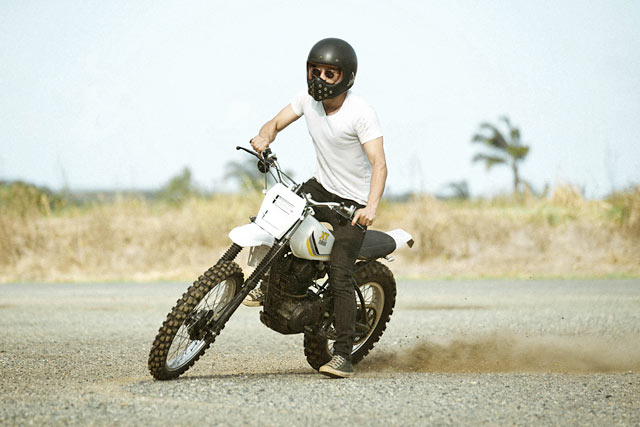 From where the Yamaha XT250 MX scrambler is now, you would never think it was a once neglected and mistreated farm bike. As with all scramblers, you know you’ve done a good job when they look good clean, but even better dirty. Test riding this bike on a farm property with a few gravel roads and mud puddles soon proved my assumption was right. A motocross-inspired custom scrambler would be a shitload of fun. Box ticked, and onto the next build.