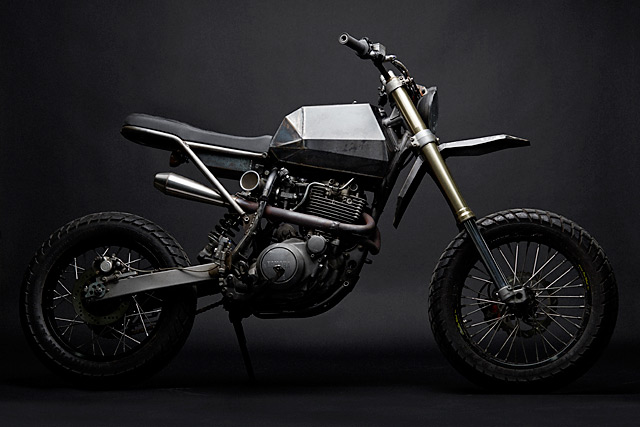 Stereotypes are dangerous things. When you get an artist from New York City send you pictures of his ride, you expect perhaps a Vespa. Or a Segway. Or, god forbid, a fixie. Well Nick van Woert not only owns this radical 1991 Yamaha XT600, he built the thing with his own hands. Stereotype destroyed. And speaking of destruction, a friend has given the bike the nickname “Woert Hog” an homage to both Nick’s name and another close quarter’s machine of demolition, the A-10 Thunderbolt Warthog. One of the first issues you face with the bulk of modern dirt and enduro bikes when it comes time for customisation is that the tanks are almost exclusively plastic, hidden behind more plastic covered in stickers. Perfectly fine for the job, but not a material you can easily shape or customise. To solve that Nick found some 16 gauge steel lying around his art studio and set to work fabricating a tank in just a day. Wanting to keep it simple and lay down as few welds as possible the tank takes on the appearance of a fold up cardboard box, only made out of armour like metal. Not only does the industrial look enhance the visuals the design yields stock fuel capacity without any airflow interruption to the engines cooling fins. The subframe Nick had already fabricated and this too dictated some of the tanks shape, but the design also allows for a bolt on/bolt off versatility unique to this machine. In a heartbeat the seat can be changed out for an enduro item, two up or even a long distance setup with racks and storage. The seat in the photos is a leather item perfect for the urban New York environment with leather work from Meccanica in Brooklyn. When it comes to building an Urban Assault Vehicle there is one area that simply cannot be compromised, as Nick would say “Suspension is everything!” Gone are the little XT forks for a modern set of Showa 47mm inverted units normally found on a Honda CRF 450R with 16 setting points of adjustment for rebound and dampening. While out the back hasn’t been left to wallow and dive with a new rear shock from the big guns at Works Performance. To give the bike the right look and improve the versatility of the handling the front rim is now entirely new and down to 18 inches and a new Sun rim laced to the stock hub for the rear. Lighting the roads and pointing to the next target is a headlight fashioned from a Hella driving light that has been mounted upside down to give a slim profile and allows for tight fitment into the fork space. Front turn signals are almost impossible to see until illuminated and are fashioned from tiny LED strips tied to 1/8th steel rod with grocery store bag wire. While the taillight is from James Crowe at West America that Nick slightly modified to hold the rear turn signals. Strafing the streets of NYC only requires minimal information to be returned to the rider and that job is taken care of by the ever popular Motogadget mini speedo. The big single thumper packs plenty of punch straight out of the box with 45bhp on tap and plenty of torque across the rev range. But who doesn’t want a little more power at their disposal, so the engine now sucks air direct from atmosphere by a more than visible velocity stack. The standard exhaust headers were then cut at the merge collector and modified to run a single pipe back under the seat giving the bike a very narrow appearance. Capping the end of the pipe work is a spring mounted Cone Engineering muffler that lets everyone in the neighbourhood know Nick is in the area; look before you cross the street! While the Military spec Warthog was like most defence procurements; drastically over budget and built with great delay. Nick’s custom XT was built without design, on budget and with each piece or modification completed in just a day. Even the tank and subframe were both completed in a single day each, a level of productivity almost unheard of in the automotive industry. Nick might own ten bikes of all shapes and sizes, but this is by far his favourite. Just don’t get in its way – it’s built to cut you down!