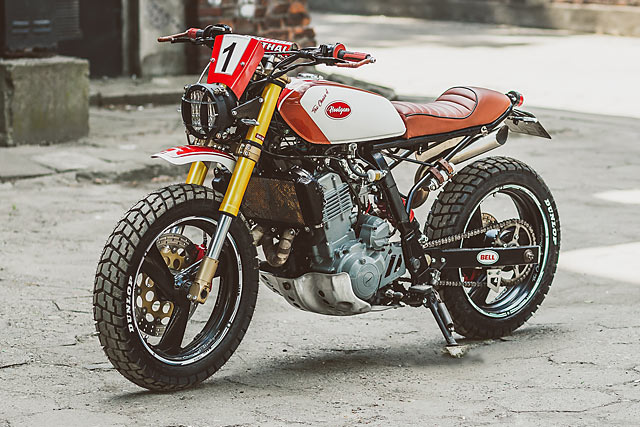 The military vibe of Poland’s Custom Operational Group’s name is not some mere affectation designed to be cool or edgy. On the contrary, shop owner ‘Piotr’ is an honest to goodness army man who builds bikes when not on duty and answers our interview questions from some remote Polish forest during a break in training exercises. Nor is the name an empty threat. Piotr’s approach to building custom bikes is no-nonsense and ruthlessly efficient, too. He designs his bikes like he’s designing a combat vehicle, except the fog of war is swapped for the thrill of the ride. Here’s his latest salvo; a Yamaha Tenere XTZ660 he calls the ‘Hooligan’. Piotr takes the stresses and troubles of military service and uses his garage to render new lives from dusty, tired classics. Mostly wrenching on Japanese bikes from the 70s and 80s along with some Harley iron, the garage is equipped with nothing but basic equipment. Most of the necessary parts are made by hand, according to the oldest of old school custom motorcycle construction rules. From the locksmithing and welding through to the electrics and painting, everything is handmade by Piotr. And when he’s not dodging bullets or building bikes, he’s spreading the word about custom culture in Poland. Piotr‘s donor here was a Yamaha XTZ 660. And to say that it’s an unusual starting point for a custom build is like saying a Russian tank is a little bit noisy. Far from it being a conscious decision, Piotr says that a friend in a tough spot offered it to him and he felt it was a deal he couldn’t refuse. Piotr calls the bike a ‘cafe scrambler’, but when we squint our eyes, we can see touches of enduro and tracker in there as well. “A scrambler is usually tall, but this motorcycle is long and low. Also, the rubber is aggressive and more typical of an off-road bike.” Luckily, the bike’s name was less of a grey area. “I called it the ‘Hooligan’; it’s my idea of a typical urban custom motorbike.” “My friend found himself in a very hard family situation and he offered to sell the Yamaha to me. It was a real challenge for me, as I have never seen a good custom bike built on the Tenere platform.” But inspired by the challenge and wanting to support his friend in need, Piotr bit the bullet and accepted the offer. And aren’t you glad he did? As always, his inspiration for the Yamaha build was his profession. “As a career soldier, I alway gravitate towards the aggressiveness of combat vehicles for my two-wheeled inspiration. But this time, I decided to add a few sports accents just to mix things up.” A sport involving combat vehicles? If there was such a thing, surely the Poles would be right up there in the rankings. World Cup level, even.

[superquote]“As a professional soldier, I alway gravitate towards the aggressiveness of combat vehicles for two-wheeled inspiration.”[/superquote]

As usual, construction began with the removal of all the unnecessary components from the factory bike – mainly in an attempt ‘catch the line’. “The key idea was for the motorcycle to have an aggressive shape, so naturally it got equally aggressive tires to suit,” smiles Piotr. The new rims, discs, brakes and forks were all from the oddball Italian bike, the Cagiva River. “The tank is from an old Yamaha RX100, which looked perfect.” But it had a fairly big problem; the top frame in the XTZ 660 has oil inside, so a decent amount of faffing around was required to allow the old tank to fit the new frame. The rest of the Yamaha’s details read like an eccentric metalworker’s wet dream. There’s a modified headlight from a Russian tank, a bespoke set of ‘bars to meet Piotr’s requirements for narrowness and a completely bespoke exhaust. The front faring was also made from scratch, along with the seat, the levers and the entirety of the new rear frame. And for a bit of variation, he decided to just modify the stock front fender and the rear shock, the latter of which was taken from a Honda CBR F4. “Choosing the right tank and mounting was the biggest challenge during the scrambler’s build. For me, the most important part of any bike is the visual line from the tank to the seat. I always try to get it just right, which I hope I did here. I feel that all the bike’s components work well together. Its lines, its colours, its proportions and accessories. But my favourite part is still those massive front forks.” We couldn’t agree more.