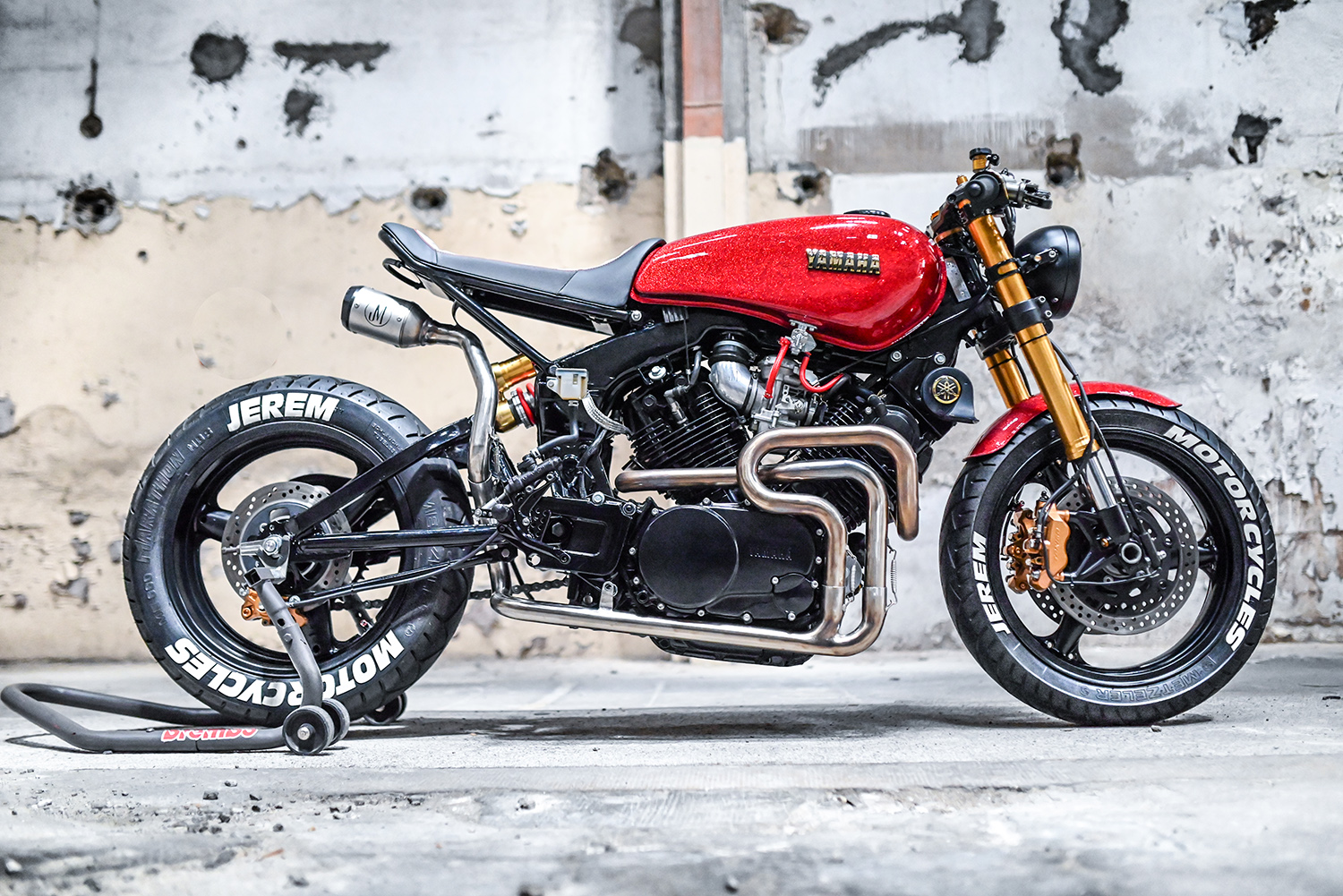 The Street Fighter style of motorcycle carved out an era in the custom motorcycle scene when it was the top dog. Endless workshops built them, magazines were named after them and Ducati released a bike just for the segment. But you hardly see a slab side Suzuki with twin headlights and a crazy up-kicked tail anymore. That, however, does not mean the scene is dead, it like many of its participants have simply matured, often adding touches of cafe racer into their ride and one of them is France’s Jérémie Duchampt. At his Jerem Motorcycle HQ he builds stripped-down, fast handling machines and his latest Yamaha XV1000 is ready to beat up the back roads.

In years gone by the big Yamaha V-Twin would never have been considered for the category, but that’s the good thing about maturing, you start to make bolder decisions and not be so afraid to run outside the pack. Sure, some of the newer Japanese bikes that formed the bulk of the Street Fighter scene are faster, but they lack the character and style of the XV and having already built a number of Ducati’s, it gave Jérémie the chance to do something a little different; maybe it’s a cafe fighter or a street racer, but it’s brilliant whatever the name.

So on the hunt for a donor bike, he came across this 1983 example and being in original and unmolested condition, decided it was the perfect basis for a project; rather than pick a bike that had been half finished and try and undo someone’s mistakes. “I took it apart completely to redo every part, every bolt…, all new bearings,” our man from the south of France explains. Literally, no single piece of the bike would be left unchanged, unmodified or unrestored. So with the bike stripped down he first turned his attention to the chassis.

The frame and swingarm were sanded back so any rust could be found and treated, any holes filled and the unrequired brackets removed. Then it was sandblasted back to bare metal, painted black and left to bake rock hard in the oven. With new bearings pressed in the swingarm was relocated and it was time to sort out the rear of the bike. The factory hub with drum brake was tossed aside and the basis of the rear is now a Suzuki SV wheel, a 630 chain and matching sprocket, with some Honda and Suzuki components then modified to mount it all together. Finally, a caliper was hung and new disc fitted to transform the back end of the bike.

To control the new rear end, Jérémie started to look for factory delivered shocks that offered the specs needed to finish the package. A Sachs unit from an MV Agusta 800 was found to be the perfect match and offers a nice mix between sporty handling and a plush ride. To bring the front end up to scratch a Kawasaki ZX6R assembly is bolted on, with new Tokico calipers fitted to the radial mounts and a Brembo master cylinder to finish the job. The top triple clamp was modified to take a flush fit Koso speedo and Metzeler tyres with bold white lettering added to the mix.

The factory tank was ditched for the nicer looking XV750 item that’s been modified with the petcocks moved to the front and the rear raised. The paint work is simply stunning, with the red brought to life with a bucket load of metal flake and no less than 12 coats of clear laid down by A2F. At the rear, a new simplified subframe was built that is topped with a stunning seat from the guys at Point Sellier 34, who added a paint matching stitch to the job. A halo-like LED strip performs the stoplight duties at the rear and a conventional headlight with LED centre is mounted to the forks.

Committed to not leaving any part of the bike untouched, the engine was pulled down, rebuilt and tuned in a joint effort in-house with assistance from Thorn Bike. The carbs were also rebuilt back to new, with a full service kit thrown at them and every single bolt replaced. They then breathe through a clear covered air filter that was originally intended for a Harley. But the standout modification is that trick exhaust, with help from SBP Welding, Jérémie has crafted a killer system that runs rearward from the twin headers before merging to become one, and screaming through the under-seat muffler like the original V-Twin Panigale shot gun exhausts.

The original loom was tossed in the bin and the new wiring is based around an M-Unit that is hidden under the tank with a lithium battery and new reg/rec. The bike now runs contactless ignition thanks to an M.Lock and a host of LED indicators are mounted front and rear to finish out the wiring. Finally, the mounts for the original pegs have been modified and a set of adjustable rearsets added to the mix, that with the clip-on bars, result in an aggressive riding position. The end product is a bike that makes a huge visual statement and yet has the performance and handling to back it up. More than 400 hours of labour were required to go from stocker form to street fighter, but when it looks this good, the reward is worth definitely the toil.