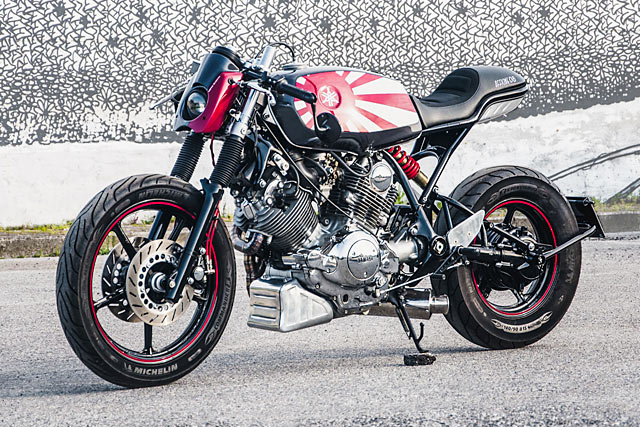 EICMA’s November 2017 show, held in a typically chilly Milan, is the place that many big manufacturers choose to reveal their new metal. This last event saw us flooded with new bikes, including the Royal Enfield 650 Twins, the Husqvarna Svartpilen 701 and the superb new Kawasaki Z900RS. But hidden away from all the glitz, glamour and wildly inappropriate booth babes was this little gem. From Italy’s Officine 08, it’s a Yamaha Virago cafe with a unique mix of the very traditional and the very unique which definitely has our Nippon-loving radars a-pinging. Officine 08’s Michael d’Angiolo takes up the story. “The origin of this bike is pretty simple; a customer showed up last autumn asking for a custom bike. He didn’t even own a bike at the time, he just showed us some photos he took from the internet. They were of Viragos done in a cafe racer style. He didn’t give us precise directions,  instead he just told us to give it a similar cafe racer touch.” Sounds like a dream brief, don’t it? One week later, he came back with a ‘93 Yamaha XV750 he’d just bought. The only downside? The bike was the ‘newer’ version with twin rear shocks as opposed to the original design’s central monoshock. “It’s a nightmare to work on when compared to the older monoshock version, but we obviously accepted the challenge.” The first thing done was cutting off the rear – and decidedly most fugly – part of the frame. “We smoothed unnecessary brackets and fabbed up new ones to accommodate a bolt-on subframe and a new monoshock, which was taken from a Ducati 750 Supersport. We then made the new subframe and, because all the electrics would be hidden in the rear of it, an aluminum cover was shaped to protect the components and smoothly follow the lines of the subframe.”

The rear swingarm was seriously modified in order to convert the bike from twin rear shocks to the desired mono. A trellis was fabbed and TIG welded to the swingarm, which may seem like a seriously difficult job, but the part that took the longest was the 2-into-1 pie cut exhaust manifold. “It was inspired by a bike Christian from Plan B built some years ago. We wanted it to look intricate and tricky.” We think they may have met the brief. “We decided to swap the original Yamaha tank with a BMW R45 unit, instead of the now clichéd Benelli Mojave replica. Some minor adjustments were made to accommodate it and we cut and moved the gas cap to the right hand side of the tank. The battery was then moved from its original position to the front of the bike, under the front cylinder.” A bespoke aluminium cover was fabricated to hide it while also managing to add plenty of ‘wow’ to the bike’s overall look.

[superquote]“We decided to swap the original tank with a BMW R45 unit, instead of the now clichéd Benelli Mojave replica.”[/superquote] The small cafe aluminium fairing was handmade and the speedo bracket was 3D printed in ABS plastic. The Bermuda Triangle of factory wiring was ditched in favour of a Motogadget m-unit which was also hidden under the rear portion of the seat. Other little but unique touches on the Yamaha abound, including a hidden three-beam projector light mounted just below the bike’s bottom triple, a mean-looking oval end can that swaps sides when you least expect it and a Uni air filter that, despite its own outlandishness, still manages to look great. “Finally, we decided to give the Yamaha more of a cafe look by adding a pair of clip-ons, some racing push buttons and a Domino fast throttle.” Then to match the ‘bar’s new jaunty look, the footpegs were pushed back using two handmade ergal plates. “Everything, except the silencer and the paintjob was made in-house by Officine 08,” notes Michael, proudly. And judging by the EICMA crowd’s response, he’s not the only one who’s happy with the work.