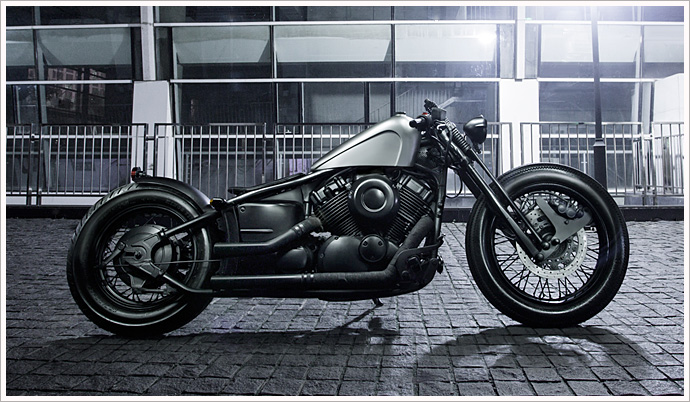 One of the nicest things about the hungry beast that’s Pipeburn.com is that you get to meet new people. We literally make contact with half a dozen new builders every week who all keen to show us their wares. What’s more, we end up getting to know them quite well. Here’s a builder I have been shooting the poop with on and off for two years now, and even through I’ve never actually met him, I’m sure that we’d get on like a house on fire. This is his fifth bike to be featured on the site. Around here we know him as ‘Dazza’, but you’ll should probably call him by his real name – Daryl Villanueva, head of Beijing’s Bandit9 Motorcycle Design.

“Atlas is an evolution on the Yamaha XVS 400, which is not the most attractive bike to base a new build on,” states Daryl, with an unusual candor. “But for Bandit9, the goal was to inspire other builders by creating a beautifully designed, well-engineered bike from a pretty rocky foundation. Not everyone can afford a Triumph or a Harley and not everyone has access to shops where you can simply buy accessories. However, we believe that these limitations pave way for art and invention.” “Atlas is actually the third design iteration and it took nearly a year to complete. The first two prototypes were 95% complete before we tore everything apart and started again. My brief was that it should be ‘brutally simple’. I wanted a clean, understated design that looked powerful and very capable. If Nero was designed for Batman, then Atlas is for Bruce Wayne, and if it wasn’t headed in that direction, then we had to start again.” So the bike was torn down a third time, leaving only the engine untouched. ”The frame was reshaped to extend Atlas’ body length, lower its stance, and also make room for the improvements in the ergonomics. The rear fender was fabricated and welded directly onto the soft tail. A slim leather saddle was designed to blend with the frame and in some angles, to disappear entirely. The beveled tank with the dual gas caps were forged from stainless steel and was shaped to flow with the seat and the tip of the fork. New side panels were designed to make Atlas as slim and as solid as possible,” says Dazza. ”The exhausts were designed to turn heads with their throaty growl.” From all reports, Atlas sounds uncannily like a lion. ”The pipes rumble everything in their wake. The heat wrap was not an aesthetic addition but a functional one to protect the rider’s legs from the hot pipes. Atlas has an upgraded springer fork with a mounted custom-made headlight, and 19-inch firestone tires.” And as a last touch of simplicity, Bandit9 made their own handlebars, which were welded directly to the fork. ”It seems to feel more responsive since the steering system is one solid piece.” Interestingly, the bike will live in the garage of Hakan Saracoglu, Design Director of Chery Motors, and ex-Porsche Designer responsible for the 918 Spyder, Cayman and GT2. When we asked what drew him to it, he replied, “I love the minimalistic approach, the extremely low riding position, and the way the rider completes the overall form. The bike is pure and raw.” And if the man who designed the GT2 says he likes it enough to buy it, who are we to argue?