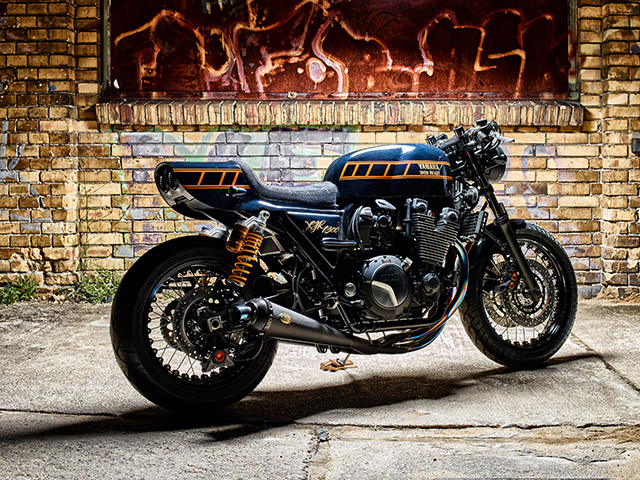 Old world craftsmanship, timeless quality and innovation in design are two things that go hand in hand with both the Yamaha Yard Built Specials and Shinichi Haraki’s Iron Heart Selvedge Denim range. With the all new 20th Anniversary Yamaha XJR1300 part of the Yard Built program and Iron Heart a company dedicated to providing the very best in denim and jean wear to the motorcycling world it made sense the two would team up. As Shun Miyazawa, Product Manager at Yamaha explains “Haraki-san and I have been friends for some years, primarily based on our mutual respect for the other’s belief in the importance of craftsmanship in the construction of our products. Iron Heart and Yamaha share a respect for traditional, timeless design where appropriate, blended with innovative, cutting edge technologies to create products that combine the best of both worlds. We wanted to work with Haraki-san for some time, and finally this year we have had the opportunity.” In automotive terms great craftsmanship has for as long as man has modified machines largely begun with hand formed metal. At first glance many of the tins on the Yamaha/Iron Heart build could appear to be reworked factory items but they are in fact the workmanship of Ken’s Factory in Japan who took on the job of building this one off machine. The front fender is massaged out of aluminium until it was both as straight as a die and truly hugged the front rubber. The fuel tank too is a handmade item, cut from aluminium and then fettled and shaped until perfection was achieved. This build is not about being in your face, it possesses a level of artistic merit that requires a keen eye to appreciate. So too the seat base, tail section and side covers, all done the old fashioned way without looking at all out of place on a brand new machine. “What I wanted to achieve was a beautiful café racer that fits perfectly into the Iron Heart universe,” commented Shinichi Haraki. “The bike is designed to be for a mature rider, not a kid. My inspiration came from 70s and 80s Japanese and European bikes that look like real bikes. Nothing has been modified or added that makes it shout more than it should, there is no design influence without function, it’s a real bike for grown-ups.” With the barebones of the canvas laid out it should come as no surprise that a motorcycling giant and a style icon would deliver in the looks department. Just like the rest of the build this bike is about refinement over raunch and the deep indigo blue paint job gives the Yamaha a wonderful nod to the styling of the sophisticated gentleman’s motorcycles of the late 70’s. Contrasting against the almost black indigo paint is the signature Iron Heart orange that gives life to the Yamaha speed blocks and pin striping, with both the Yamaha and Iron Heart logos finished in gold leaf. Atop the Ken’s Factory pan is Iron Heart’s own 21oz Selvedge Denim seat, stitched to perfection in their classic orange and finished off with pure silver rivets. If hand formed metal work and pin striped paint is a nod to a classic era of yesteryear, CNC turned parts created on multi axis machines are a way to add some 21st century styling without losing any of the elegance. Items like the clock case, front and rear indicators and headlight brackets have been turned into life from solid blocks providing form from pure functionality. The grips and the foot pegs also created in this way are given a mix of paint and machined metal for a truly industrial look. With Yamaha having already fitted a set of world class Ohlins shocks, Magura bars lower the front stance for the rider and further enhance the XJR’s café credentials. If the aesthetics weren’t enough already a set of big dollar spoked Kineo lightweight wheels of the tubeless variety take care of the rolling stock and look as good as the price tag. Powering the XJR 1300 is one of the great air cooled engines of the modern era, it’s the biggest capacity of its kind but it is more than just about muscle. Sure with 108nm of torque a 911 Turbo on a rolling run but a DOHC 4 valve head, brilliant fuelling and 20 years of refinement mean you can tickle the throttle in any gear without pause or hesitation. Drilling out baffles might be what we do as teenagers but multinational corporations do things a little differently and nothing says quality and sophistication like the exquisite set of titanium headers exhaling for the 1251cc engine. With all parties involved wanting just the right sound Ken’s Factory went to great length to get the twin stainless mufflers just right and they work flawless with the rest of the system. Hugely important to any of the Yard Built projects has been maintaining as much of the basis of the motorcycle itself, this means no cutting and welding of the frame. The idea being that not only does the project serve as an inspiration to Yamaha’s customers but it also means many of the parts on the Iron Heart XJR will be released as aftermarket parts so that those that wish to recreate this über cool machine can do so for themselves. And who wouldn’t want their own Yamaha special, with parts by Ken’s Factory and dressed to the nines in Iron Heart Denim, in an industry built on style these guys do the best in show.