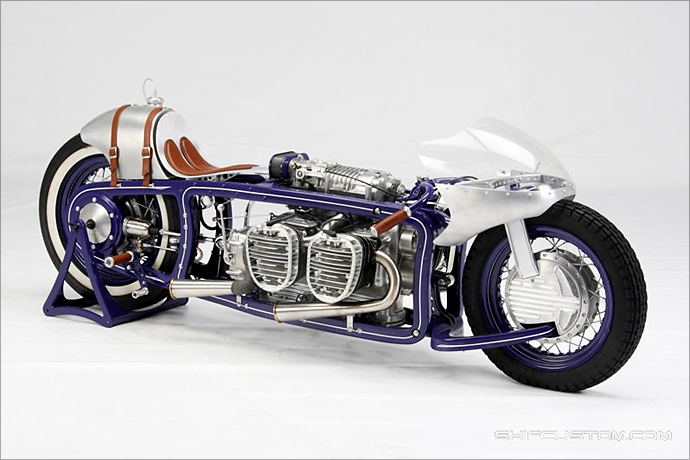 Here’s one out of left field, or more correctly out of east field. I think it’s fair to say that Belarus isn’t exactly known for custom bikes… come to think of it, I’m not sure what it’s known for. Until now, that is. Say “Вітаю” to The Machine, a bespoke creation from Minsk’s Yuri Shif Customs and the best thing to come out of Belarus since, um, since ever.

Some of you might remember Yuri’s previous creation, the very baroque Ducati Duster, which made quite a spalsh back in 2010 at the Verona Expo when it took out the Best International Bike Builder award. Not one to rest on his laurels, Yuri apparently sketched this bike out in his hotel room after the show and hey presto, he shows up with this creation at the AMD Custom Bike Building World Championship later in the year. Either Yuri’s a guy with a lot of free time up his sleeve, or there ain’t jack to do in Minsk. Either way, I think we should all be thankful that a guy with pretty much zero local help or custom bike culture can come up with something as amazing as this. Sorta makes you feel a little lazy, don’t it?

Thanks to a fairly hefty language barrier and the world’s worst translator, information on The Machine is a little hard to come by. From what we can tell, it’s based around two custom BMW boxer engines topped off by an amazing-looking blower, again from Deutchland. Yuri’s guiding principle for the build was to create something that could just have easily been created in the 1930s or 40s as in 2010. I could be going out on a limb here, but I’m guessing that he’s a fan of classic 1934 BMW K7. For a custom, the steering set-up is an amazingly daring hand-made single-sided swingarm design. I’m really testing my engineering knowledge here, but to me it looks like a top wishbone setup with a pushrod connector from the bars to the… um. Scrub that, I have no idea at all how it works. But hot damn it looks great, and that knock-off hub is a masterstroke. Other highlights of note in this engineering wonderland are the rear-cowl-as-petrol-tank complete with beautiful leather straps that match the buttcheek cushions on the sleek seat, the grips on the beautifully dropped handlebars, and the rearsets. Also, check the totally unique cylinder head designs – I don’t know about you, but I’ve never seen that done before and I’m an instant fan. It’s part cage, part kendo mask, and all kick-ass. While I love the antique purpley-blue he’s finished the frame in, I’m really tempted to throw the thing into Photoshop and see what it’d look like in a semi-gloss black. But that’s just me. Yuri was quoted as saying that he was keen to take the bike to Bonneville and give it a little open air and salt to let it stretch it’s legs. The thought alone is enough to give me goosebumps, but Google as I may I can’t find any more on this. Yuri, if you’re reading this please let us know if you ever got there. And while you’re at it, what are you working on next? After knocking two-for-two clean out of the ballpark, I’m sure I speak from us all when I say that we are waiting with bated breath… It’s a bit of a stretch to the ‘bars – just pray that the supercharger doesn’t throw a rotor. Yuri and The Machine.

(Thanks to Taras from Bike Magazine in the Ukrane for the tip-off.)